What Is Shariah Law? These secondary laws are based on commands in Quran and Sunnah – the Prophet's words, example and way of life

The al-Qaeda-inspired Islamic State of Iraq and Syria (ISIS) announced Friday that a Shariah-based system of governance will be imposed in Mosul and other cities and towns in Iraq that have been overtaken by militants.

It is already forbidden in Iraq to enact legislation that is antithetical to Islam, but the imposition of Shariah law is highly controversial and open to interpretation. 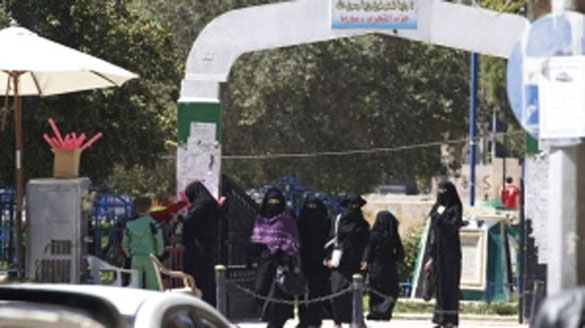 The Islamic State in Iraq and Syria has imposed Shariah law in parts of Syria and Iraq. Here, veiled women walk along a street in the northern province of Raqqa, Syria. (Reuters)

We answer some questions about Shariah law below:

The word Shariah means "the path to a watering hole." It denotes an Islamic way of life, not just a system of criminal justice.

It is a code of living that most Muslims adopt as part of their faith.

Some countries formally institute it as the law of the land, enforced by the courts. However, the way Shariah law is applied from country to country can vary widely.

How did it originate?

According to Muslim scholars, the Prophet Muhammad laid down the laws. Some of the laws are said to be direct commands stated in the Qur'an. Other laws were based on rulings Muhammad is said to have given to cases that occurred during his lifetime. These secondary laws are based on what's called the Sunnah – the Prophet's words, example and way of life.

According to the Middle East Institute in Washington, D.C., "Muslim scholars do not consider Islam to be an evolving religion, but rather a religion and legal system which applies to all times. It is, therefore, the application that is susceptible to evolution. Indeed, the provisions of the Qur'an are such that by their disciplined interpretation, with the aid of the Hadith and Sunnah and other sources of interpretation, Islam can, as intended, provide the solution to contemporary social problems."

What do its critics say?

One of the major concerns of people critical of Shariah law is that it is subject to interpretation and evolution. There is virtually no formal certification process to designate someone as being qualified to interpret Islamic law.

With Shariah law there are no easy answers or quick interpretations.

As it stands today, almost anyone can make rulings, as long as they have the appearance of piety and a group of followers.

In the West it's common for people to equate Shariah law with harsh physical punishments, polygamy and the oppression of women.

What is punishment and equality under Shariah law?

“In Shariah, there are categories of offences: those that are prescribed a specific punishment in the Qur’an, known as Hadd punishments, those that fall under a judge's discretion, and those resolved through a tit-for-tat measure (blood money paid to the family of a murder victim, etc.), according to information provided by the U.S. Council on Foreign Relations.

Men and women are not equal under Shariah law, and same-sex relationships are forbidden.

Shariah law prohibits bribery or special favours in court, demands equal treatment for rich and poor, and calls for the protection of everyone's property

What do its defenders say?

“Today’s advocates of Shariah as the source of law are not actually recommending the adoption of a comprehensive legal code derived from or dictated by Shariah — because nothing so comprehensive has ever existed in Islamic history,” says Noah Feldman, a contributing writer for The New York Times, a law professor at Harvard University and an adjunct senior fellow at the Council on Foreign Relations.

“To the Islamist politicians who advocate it or for the public that supports it, Shariah generally means something else. It means establishing a legal system in which God’s law sets the ground rules, authorizing and validating everyday laws passed by an elected legislature.”

How does Shariah law operate with modern economies?

According to the U.S. Council on Foreign Relations, Islamic banking is growing at an estimated 15 per cent annually. It modifies modern business practices to conform to the rules of Shariah. Central to this field is Riba, the charging or payment of interest, which banned under Islamic law.