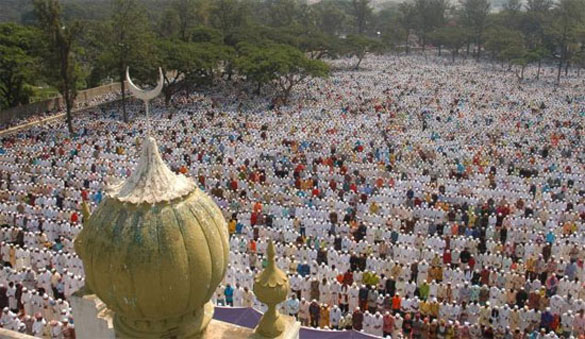 FAITH AND LAW: The Court’s judgment will neither stop ignorant Mullas from issuing bizarre Fatwas nor prevent ill-informed people from publicly expressing their ostensibly anti-Islamic prejudices under the garb of supporting equality. Photo: K. Murali Kumar

“Historical judgment in India: Fatwas, Shariat courts illegal, says Supreme Court”, “Supreme Court slams Shariat Courts, says Fatwas are ‘illegal’”, “‘Shariat courts not legal’” — these are some of the headlines that were carried by national dailies in India. As the media went hammer and tongs in its pursuit to make people believe that Shariat courts have, indeed, been banned by the apex court, ill-informed ‘experts’ hailed this exceptional “Constitutional victory”, and Muslim clerics refuse to tolerate “judicial interference” in their religious affairs.

Has the Supreme Court really held that Shariat courts and Fatwas are “illegal”? A bare reading of its judgment delivered on July 7 in Vishwa Lochan Madan v. Union of India would suggest otherwise.

At the outset, both the Court and the petitioner have confused two issues. The first is of Fatwas being issued by clerics, and the second is of Shariat courts. The two issues are independent and distinct. A fatwa is an opinion on a religious matter which ought to be sought from and delivered by a well-read religious scholar. In practice, however, Muslims seek such opinions from Maulvis presiding over small mosques in every nook and corner of the country, who are often far too ignorant to even lead prayers, much less render scholarly opinions on sensitive inter-personal issues. Clerics, both well-read and ill-informed, have been rendering such opinions on a variety of issues ranging from the correct method of cooking food to the pre-requisites of a valid divorce. As is the case with every opinion, it is up to the querist to accept or reject it. Undoubtedly, the religious flavour of such opinions read with the religious sensitivities of Indian Muslims demands that, at the very least, strict self-regulatory rules ought to be framed in this matter.

From the early twentieth century, an institution called the Dar-ul-Quaza, known in common parlance as the Shariat courts, has been operating in many parts of the country. The Dar-ul-Quaza is devised as a permanent alternative dispute resolution (ADR) mechanism to resolve family disputes of consenting parties. Like in arbitration, if both parties agree, instead of a civil court they may approach the Dar-ul-Quaza for resolution of their disputes. The Dar-ul-Quaza does not issue Fatwas. It also does not administer criminal law; it simply resolves family disputes by applying principles of Islamic law, which even civil courts are bound to apply in cases where both parties are Muslim (just like if both parties are Hindu, the disputes will be resolved in accordance with Hindu law). Muslims, like all other citizens, continue to be governed by the law of the land and be subject to the jurisdiction of Constitutional courts in equal measure.

Issue before the Supreme Court

In 2005, a 28-year-old uneducated Muslim woman named Imrana was allegedly raped by her father-in-law in a village in Western Uttar Pradesh. A local Muzaffarnagar-based journalist approached the well-known Islamic seminary in nearby Deoband and, without disclosing the facts of this particular case, sought a general opinion (fatwa) on the status the marriage of a woman who has been raped by her father-in-law in a hypothetical case. An ill-informed cleric who had no business to render opinions in such sensitive matters, opined that, in such a case, the victim’s marriage with her husband would stand dissolved. He founded his opinion on the Qur’anic edict which commands men to “marry not the woman whom your father married”. It is needless to accentuate how bizarre the opinion was and how misplaced was the reliance on this salutary Qur’anic edict. The fatwa was, rightly, rubbished by scholars across the board. The matter rested there was never taken to the Dar-ul-Quaza.

Appalled by the absurdity of the fatwa and its ramifications, a Delhi-based lawyer approached the Supreme Court by way of a public interest petition and alleged that Muslim clerics who have set up Shariat courts all over the country are rendering judgments like courts in the form of Fatwas and are, thus, running a ‘parallel judiciary’ in the country. Somewhat confusingly, he clubbed together the two different and distinct issues of fatwa and establishment of Shariat courts. In his petition, he impleaded as Respondents the Union of India, some States where Dar-ul-Quazas were running, and some Muslim religious organisations like the All India Muslim Personal Law Board, and sought declarations from the Supreme Court to the effect that the very establishment of the Dar-ul-Quazas was illegal and the Fatwas so issued were void. He also sought a direction to the Union of India and the States concerned to forthwith take steps to disband all Dar-ul-Quazas throughout the country.

In response to the petition, all the Respondents took a common stand. Broadly speaking, their argument seemed two-fold — first, that the Dar-ul-Quazas were not in the nature of civil or criminal courts but were, in fact, institutions devised as ADR mechanisms. Like other ADR mechanisms, this could also be used by consenting parties to resolve their private disputes out of court; no one can be forced to acquiesce to the jurisdiction of the Dar-ul-Qaza. Second, Fatwas issued by clerics were merely their opinions on given queries and like any other opinion they were not binding on anyone.

After seven years, the matter came up for hearing in the Supreme Court early this year. The Court did nothing to do away with the confusion between the two issues of fatwa and the establishment of Dar-ul-Quaza, perhaps because it was not asked to. It agreed with the Respondents that a fatwa is merely an opinion and neither a fatwa nor a decision of the Dar-ul-Quaza can be enforced like a court decree. According to the Court, for this reason, neither a fatwa nor a decision of the Dar-ul-Quaza has any “sanction under our Constitutional scheme.” However, it categorically upheld both the establishment and functioning of the Dar-ul-Qaza as well as the practice of issuing Fatwas, adding that “this does not mean that existence of Dar-ul-Qaza or for that matter, practice of issuing Fatwas are themselves illegal. It is (an) informal justice delivery system with an objective of bringing about amicable settlement between the parties. It is within the discretion of the persons concerned either to accept, ignore or reject it.” Holding that Fatwas and Shariat court decisions were not legally enforceable, the Court refused to grant any of the prayers sought in the petition.

However, the Court was disturbed by the practice of clerics issuing Fatwas on the request of third parties who were strangers to the dispute in question, like in the Imrana case. Mindful of the fact that “since fatwa gets its strength from religion… it causes serious psychological impact on the person intending not to abide by that” and “has the potential of causing immense devastation”, the Court “advised” clerics, and rightly so, that in inter-personal disputes, Fatwas ought not to be issued at the request of strangers. With these observations, the Court rejected the prayers. Shariat courts were not declared illegal, Fatwas were not declared void and directions were not issued to the government to disband the Shariat courts.

The Supreme Court judgment, though it could have been better-worded, is sensible. It is mindful not only of the law of the land and the deplorable condition of Indian Muslims but also of religious sensitivities in the country. It seeks to strike a judicious balance among all three. However, the judgment does not make any practical difference to the legal position as it existed till the day it was delivered. It will neither stop the self-seeking ignorant mullas from issuing bizarre Fatwas, which are an onslaught on the basic tenets of Islam, nor prevent ill-informed people from publicly expressing their ostensibly anti-Islamic prejudices under the garb of supporting the cause of equality before law.

Saif Mahmood is an advocate of the Supreme Court.