Fatwas Popular These Days, Available Even On Internet

The decision to reconcile with her husband a year after their divorce should have made Parveen Cocainwala happy. Instead, it led to fresh trouble. A mufti decreed Parveen would have to wed another man, consummate that marriage and have him divorce her before she could remarry her ex. The order didn't come out of the blue. It was in accordance with a fatwa but Parveen and her mother refused to follow the diktat. "I could not let my daughter be treated like a piece of flesh. We went against the fatwa and got them remarried," says her mother Noorjahan.

The mother-daughter duo from Mumbai may have defied the fatwa, but across villages of UP and Bihar, many divorced Muslim women have endured the humiliation of 'Halala' to remarry former husbands. It is these women who may find relief in the recent Supreme Court ruling stating that Fatwas issued by Shariat courts or muftis have no legal sanctity, and that it is illegal to impose religion-based opinions that are in violation with citizens' fundamental rights.

Though best known as the sword Ayatollah Khomeini held over Salman Rushdie's head forcing the writer into exile for several years, a fatwa isn't necessarily life-threatening; it is just the opinion of a deemed scholar on a specific question, based on his interpretation of the scriptures. A section of educated Muslims already knew it had no legal sanction; as for the rest, it is unlikely to stop them from seeking answers from individual muftis and Darul Iftas (abode of or fatwa-issuing institutions) spread across the country. "Fatwas are meant to guide the community in the light of Islamic principles and Muslims will never do away with them," declares Darul Uloom Deoband's rector, Maulana Abdul Qasmi Noamani.

Fatwas are such a fad today that they are even available online. Darul Ifta, the fatwa-issuing department of the UP-based Islamic seminary Darul Uloom Deoband, launched its website in 2007. Till date, it has issued 14,581 Fatwas in Urdu, and 7,045 in English. "We decided to accept queries for Fatwas online to reduce the load on our staff," says Noamani. The number of queries has gone up in recent years because of the online facility. "A decade ago we used to get around 10,000 queries yearly. This number is around 25,000 today plus 5,000 via email," says a source from Darul Ifta. 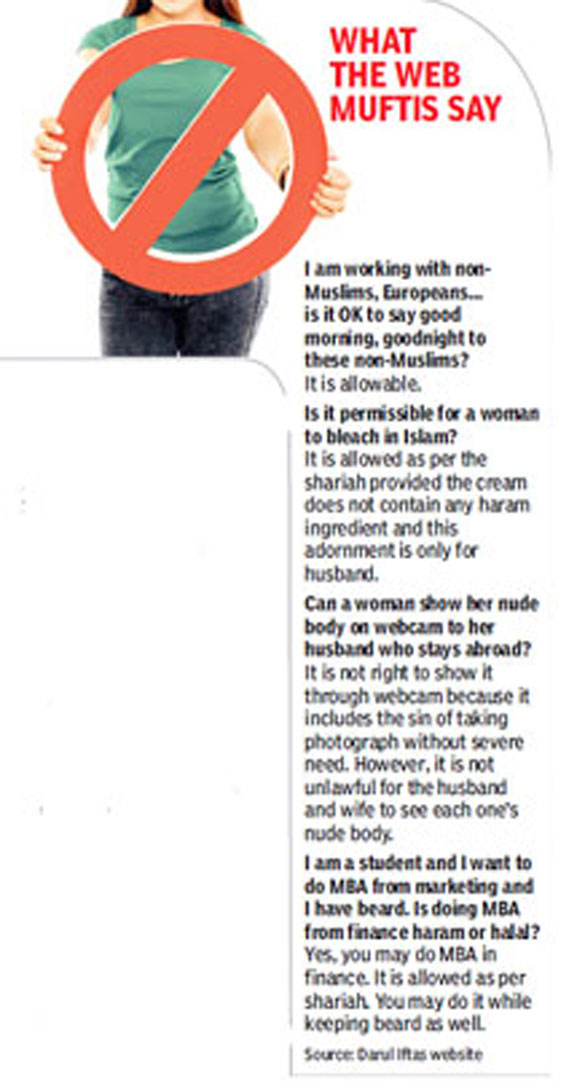 A cursory glance at the queries posted on the website show that many of them don't even merit an opinion. A man asks the mufti whether he should wear his watch on his left or right wrist — instead of holding forth on the merits of wearing it on the left, the mufti could have dismissed it. But because it is a means to control how community members live their lives, Fatwas continue to be issued.

As a result, however, the gravity associated with a fatwa is lost. Many Maulvis issue inane, unsolicited Fatwas that often even embarrass the community. A few years ago, for instance, a Midnapore-based Maulvi issued a fatwa against tennis player Sania Mirza, calling her short skirt "obscene and sacrilegious". Neither Sania nor any of her countless fans had approached him for an opinion about her skirt. A sting operation by a TV channel a few years ago exposed how Fatwas can be bought by paying many impoverished muftis, further damaging the credibility of the process.

The biggest beneficiaries of the recent ruling, however, will be women from the community. Zeenat Shaukat Ali, who teaches Islamic Studies at St Xavier's College, Mumbai, says Fatwas prohibiting women from working, co-education or travelling unaccompanied by a man stem from a misogynist mindset which has been challenged by the SC ruling. "It's a positive step towards creating opposition to such Fatwas," says Ali. But as to how the SC ruling will actually impact the issuing of these pronouncements, it's an answer that may keep even the Maulvis guessing.