What is the Significance and Status of Al-Qudus in Islam – The Holy Land also named Baitul Muqaddas, Baitul Maqdis or Jerusalem?

3.    Religious Significance of Al-Quds; Al-Isra and Me’raj, virtue of establishing prayer in Masjid-e-Aqsa

4.    Masjid-e-Aqsa - the first of the two Qiblahs, the third of the Two Holy Mosques, and the landing place of the Prophet Muhammad, peace be upon him. 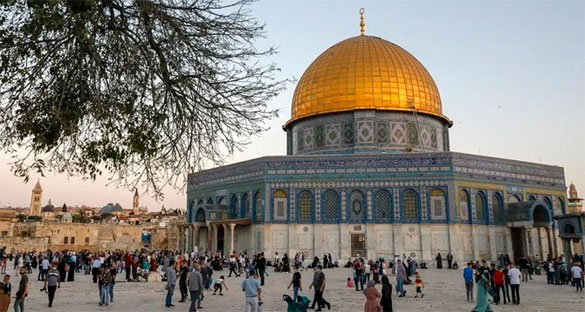 Al-Quds or Bayt al-Maqdis, also spelt Baitul Muqaddas is known by many names. Different nations gave it different names based on their respective traditions and creeds. Jews and Christians still call it Jerusalem. The oldest name of this city is Jebus and was renamed by Hazrat David (in Bible, but Dawud in the Quran - peace be upon him) as the City of David.  Attributing the name of this place to Hazrat Abraham (Ibrahim in the Quran - peace be upon him), the Jewish rabbis say that its name was Yerushalem or Yerushalayim, a combination of two names, Yireh and Shalem (‘place of peace’). Yireh or Jereh also spelt Jireh means “the abiding place”, the name given by the Prophet Hazrat Abraham to the place where he planned to sacrifice his son as well as the Prophet Hazrat Issac (Ishaq in the Quran). However, Muslims have always preferred to call it ‘Al-Quds or Baitul Muqaddas (Holy land) or Baitul Maqdis (the holiest place).

Al-Quds is considered holy to the three major ‘Abrahamic’ religions — Judaism, Christianity, and Islam. However, we will specifically discuss its significance and status as enshrined in Islam.

The holy Qur’an recorded the status of Al-Quds when it clarified that Allah Almighty took His beloved Prophet Muhammad (peace be upon him) from Masjid-e-Haram to Masjid-e-Aqsa, as Allah Almighty says,

“Exalted is He who carried His Servant [Prophet Muhammad] by night from al-Masjid al-Haram [in Makkah] to al-Masjid al-Aqsa [in Al-Quds or Jerusalem], whose surroundings We have blessed, to show him of Our signs. Indeed, He is the Hearing, the Seeing.” (17:1)

Al-Masjid al-Aqsa literally means ‘the farthest mosque. This was so named due to the distance between it and al-Masjid al-Haram. This was the farthest mosque on earth for the people of Makkah, which was venerated by visitation. Al-Masjid al-Aqsa refers not only to the silver-domed mosque on the southern side of the Temple Mount Plaza but to the entire sacred sanctuary including the Dome of Rock, the Gates of the Temple Mount and the four minarets.

The part of the verse (17:1) “…Al-Masjid al-Aqsa whose surroundings We have blessed….” comprises of both sensual and semantic blessings. The sensual blessings include the kinds of fruits, crops and rivers that Allah Almighty bestowed upon this land. As for the semantic blessings, they include spiritual and religious aspects, as al-Masjid al-Aqsa was the landing place of the righteous servants of Allah Almighty, His Prophets and Messengers including the last Prophet Muhammad (peace be upon all of them). Many Prophets and righteous servants of Allah Almighty were buried around al-Masjid al-Aqsa.

The holy Quran mentions numerous places, locations and stories most of which are those that took place within the blessed land of Al-Quds. There are many verses in the Quran that directly or indirectly elevate the rank of Al-Quds/Baitul Muqaddas or Jerusalem. One of the verses refer to Al-Masjid al-Aqsa being the first Qiblah, as Allah Almighty says,

“…And We did not make the qiblah which you used to face except that We might make evident who would follow the Messenger from who would turn back on his heels…(2:143)

Al-Masjid al-Aqsa is one of the three mosques that the Muslims must go to offer their prayers. Hazrat Abu Huraira narrated that the Prophet (peace be upon him) said, “Do not set out on a journey except for three Mosques i.e. Al-Masjid-AI-Haram, the Mosque of Allah's Apostle, and the Mosque of Al-Aqsa, (Mosque of Jerusalem).” (Sahih al-Bukhari 1189, Book 20, Hadith 2) 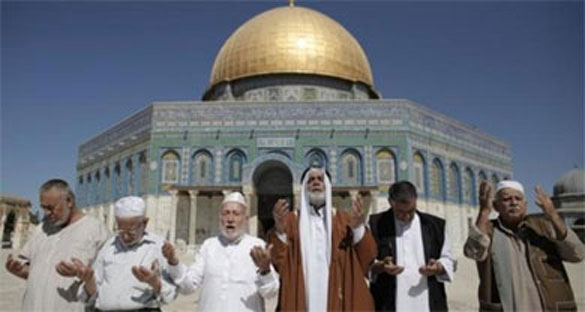 In another narration, the words are: “You should not undertake a special journey to visit any place other than the following three Masjids with the expectations of getting greater reward: the Sacred Masjid of Makkah (Ka’bah), this Masjid of mine (the Prophet’s Masjid in Madinah), and Masjid Al-Aqsa (of Al-Quds)” (Sahih Muslim, Abu Dawud). Quoting this hadith, the commentators have stated the significance of performing the prayers in these three mosques.

The Prophet is reported to have said,

“A prayer in Makkah (Ka’bah) is worth 1000,000 times (reward), a prayer in my Masjid (Madinah) is worth 1,000 times and prayer in Al-Aqsa Sanctuary is worth 500 times more reward than anywhere else”. [Tabarani, Bayhaqi, Suyuti]

Al-Masjid al-Aqsa was built forty years after al-Masjid al-Haram (Sacred Mosque in Makkah), as it is mentioned in the authentic hadith on the authority of Hazrat Abu Dharr that he asked the Prophet (peace be upon him),

“O Messenger of Allah, which Masjid was built first on earth”? The Prophet replied, “The Sacred Masjid of Makkah”. Abu Dharr again asked, “Which was next”? The Prophet said, “Masjid Al-Aqsa”. Abu Dharr further asked, “How long was the period between the buildings of the two mosques”? The Prophet (peace be upon him) said, “Forty years”. Apart from these, offer your prayer anywhere when it is time to pray, although excellence is in praying in these Masjids”. (Bukhari)

Al-Masjid al-Aqsa has a great position in Islam, as it is the first of the two Qiblahs, the third of the Two Holy Mosques, and the landing place of the Prophet Muhammad, peace be upon him.

“And We granted the vision (Ascension to the Heavens) which we made you see (as an actual eye witness) was only made as a trial for the people” (17:60),

“The sights which Allah’s Messenger was shown on the Night journey where he was taken to Baitul Muqaddas were actual sights, (not dreams). And the Cursed tree (mentioned) in the Quran is the tree of Zaqqum. (Sahih Bukhari)

In the city of Al-Quds, a large number of the Sahaba and the Tabiun including the great companion Ubada bin Al-Samit and Shaddad bin Aws (may Allah be pleased with them) were buried. Al-Quds is linked to the prophecies, Sharai's (religious rules) and the Messengers who came to this blessed land. Al-Aqsa mosque was a qiblah for them. All this represents the religious blessings that surrounded it.

Hazrat Abu Dharr reported that he asked the Prophet (peace be upon him),

“O Messenger of Allah, which Masjid was built first on earth”? The Prophet replied, “The Sacred Masjid of Makkah”. Abu Dharr again asked, “Which was next”? The Prophet said, “Masjid Al-Aqsa”. Abu Dharr further asked, “How long was the period between the buildings of the two mosques”? The Prophet (peace be upon him) said, “Forty years”. Apart from these, offer your prayer anywhere when it is time to pray, although excellence is in praying in these Masjids”. (Bukhari)

It is this blessed land of Al-Quds where Masjid-e-Aqsa is located, and to which the Prophet Muhammad (peace be upon him) was transported one night from Masjid-e-Haram. It is from this place that the Prophet ascended to Heaven and met the previous Prophets and Messengers (peace be upon all of them).