It was a long and leaden day; I came back from my university classes. Classes are always tiring. I rested my back against a pillow when my phone buzzed. I saw a message flickering on my mobile phone. It was about Rahat Indori visiting the campus. I jumped over the joy. I always wanted to meet him not because he was one of the noted lyricist and poet but he has been very vocal about the growing communalism and corruption and more so his stance and position on CAA is noteworthy.

His politically charged poetry would pierce hearts, when he said,

I remember when he entered the auditorium the first words he uttered “Bulati Hain Magar Jaane Ka Nahin”, He repeated this couplet and threw the crowd into cachinnation. They went crazy hearing the poem that trended on social media like a bullet. 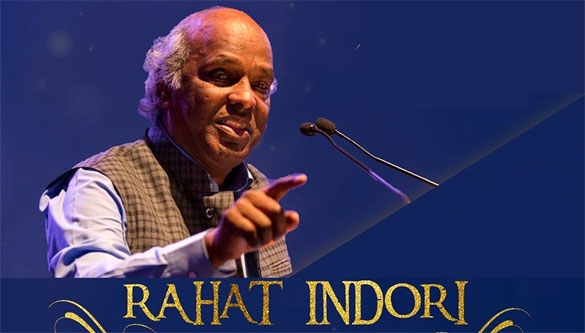 Doctorate in Urdu literature, his style of reciting poetry was something any poet could yearn for. He was a perfect blend of wit and wisdom. Especially the sense of humour, I was thrilled and my lungs pained with laughter to the jokes he cracked in the middle of his poetry recitation. His gestures, tone and sarcasm explained volumes about the current situation we all live in. In those few hours we saw him on stage performing his heart out. I realized he is the man of the moment, the man whose smiling face tickled us all, deep down I knew he was concerned. I was waiting for that moment which I can snap from everyone so that I can talk to him in person. Throughout the session I kept strategizing how to manage to talk to him. Fortunately, I got the moment. I met him when the session was over.

First, I didn’t know what to say, my throat almost stopped gasping air. I got so excited to talk to him due to that excitement I was unable to move a word, and then suddenly Kashmir slipped out of my tongue. He said, are you from Kashmir, to which I could only nod.  Without speaking a word, he came forth extended his right hand, his eyes met mine and he kept his hand on my head saying, God bless you and god bless Kashmir, and with this line he blew away.

I wanted to talk more, but that moment literally ceased. My eyes followed till he disappeared into the air. Ah, I wish I could have mustered the courage to talk to him, to listen to him but to my dismay without ‘Kashmir’ I didn’t utter a word. He will be one of those poets whose absence will always be felt. His powerful delivery is hard to be found, he was a mouthpiece and a voice to voiceless people and to all those voices who are clamouring to be heard.

The year 2020 can never be forgotten, neither the people like Rahat Indori. When I heard the news that he has been admitted to a hospital because he was Covid positive and the other day I heard he is no more. This news came as a shock.

With him an era, an institution and a school of thought died. There will be no Rahat Indori again; that charm, that intellect, that humour that style he carried was unmatched. May Allah bless his soul. 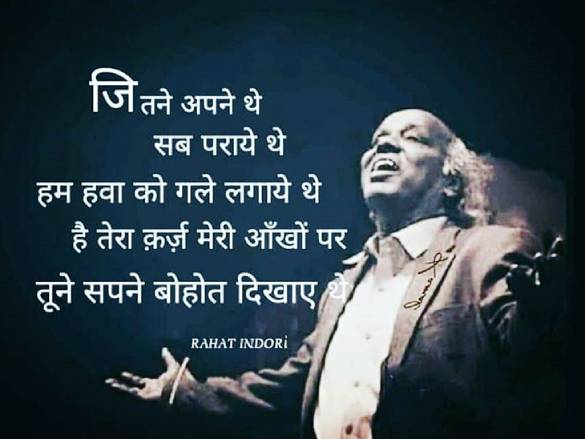 Concluding with one of his noted couplet:

Original Headline: The day I met him