It was on this day in 1958 that Maulana Abul Kalam Azad passed away. It was not merely the death of an extraordinary human being but also the death of an idea that sparkled for a few decades — the idea of an undivided India where Muslims could live happily with the Hindu majority. Muslims made India their home centuries ago, and according to Azad, they had a huge stake in the idea of India. However, Azad’s idea received a jolt in 1947 as the violence of partition ravaged India. Azad went on to live for another ten years, helping in healing and rebuilding the scarred and bruised new India. 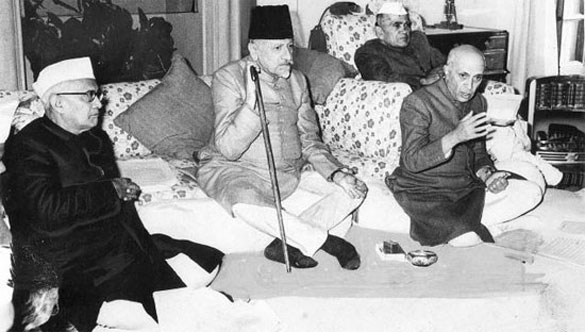 Maulana Azad made extensive observations on the education system and syllabi in the context of his own education in the late 19th Century. Picture shows Azad (centre) with Prime Minister Jawaharlal Nehru, Sayed Mahmud, and Kailash Nath Katju in 1955.

Azad lived many lives. Some of them are well known, yet some have remained mysteriously unknown. Not much is known or written about them in public. There was a decade in his early days when he was disenchanted with the inherited faith and had to brazen out some difficult and uncomfortable questions about Islam.

Even before arriving at this situation, he was a rebel as a child who disagreed with his father’s faith, got enamoured of Sir Syed’s modernism that his father Maulvi Khairuddin hated, and decided to learn sitar on the quiet though his father did not approve of music. His dissent against the inherited belief went even further — he became an atheist (Dehri) and reposed faith only in materialism and rationalism. Religion was reduced merely to a superstition. From the age of 14 to the mid-20s, he just put up a facade of belief in public but inwardly remained completely without faith.

This short phase in his life was ephemeral as he soon got back to Islam, yet his Islam remained qualitatively different. And it is on this count that Azad stands distinctly apart from everyone else. He was himself conscious of the fact that not many people went along with him when he said: “In religion, in literature, in politics, on the paths of philosophy, wherever I went, I went alone. The caravans of the times did not support me on any of my journeys.”

Azad emphasised all his life on the original spirit of engagement with the Quranic text, which was available to all believers of Islam. He refused to accept the canonised Islam; instead he called for independent reasoning or Ijtihad to interpret the faith. He also warned against reading more than what was intended to be conveyed in the Quran. This sounds so prophetic in the contemporary context where Islam is invoked by many to speak what they want the Book to speak.

Ghubar-i-Khatir is a collection of letters written in the Ahmednagar Fort prison during three years of incarceration between 1942-45, where Maulana Azad opens his mind to some very unconventional and mundane issues. For example, one of the letters deals with his lifelong passion for tea. He began his day, he writes, with a freshly brewed cup of white Chinese jasmine tea that he consumed mostly alone as no one else could appreciate its taste. Most others were addicted to a concoction mixed with milk and sugar which the British had told them was tea. Only Jawaharlal Nehru, he wrote, used to have black tea, but not the real Chinese tea. In another letter he writes about happiness. He cites a Chinese person saying: “Who is the wisest man? The answer is: He who is the happiest.” Interestingly, he derides those who believe that men of religion and philosophy need to look serious and morose. This, he says, cannot be a pre-condition for respectability and learning.

Azad also comments upon the education system and syllabi in the context of his own education in late 19th Century India, particularly the Islamic madrasas. He wrote: “It was an outdated system of education which had become barren from every point of view — teaching methods defective, worthless subjects of study, deficient in the selection of books, defective way of reading and calligraphy.” If this is what Azad felt about the Islamic madrasas more than hundred years ago, we can well imagine the urgency and necessity of radical reform in the contemporary system of education.

He is critical of even Al-Azhar University and calls its syllabus poor. Expressing a sense of relief at the fact that he did not have to depend on these madrasas for his early education, he writes: “Just imagine if I had stopped there and had not gone in search of new knowledge with a new curiosity, what would be my plight! Obviously my early education would not have given me anything except a stagnant mind, a total stranger to reality.”

The present day Islamic enthusiasts need to learn a lesson or two from the insights of a scholar like Azad — both from his writings against conformism and conservatism and his questioning of his own family’s intellectual and religious inheritance. He writes further in another letter: “Nothing is greater hindrance to the growth of a mind than its conservative beliefs. No other power binds it as do the shackles of conformity…At times so strong is the grip of inherited beliefs that education and environment also cannot loosen it. Education would give it a new paint but never enter the inner belief structure where the influence of race, family and centuries old traditions continue to operate.”

We need to reflect upon and recall Maulana Azad’s precious and mostly forgotten inheritance, which was based on free thinking and pluralism. In particular, Azad’s Islam was much more accommodative than the contemporary rigid and combative Islam.

That is why, at times like these, when religious fault lines threaten the very idea of India, we must pay heed to Azad’s inheritance.