Allama Iqbal a Sufi Master — Was a Poet of Islamic Renaissance 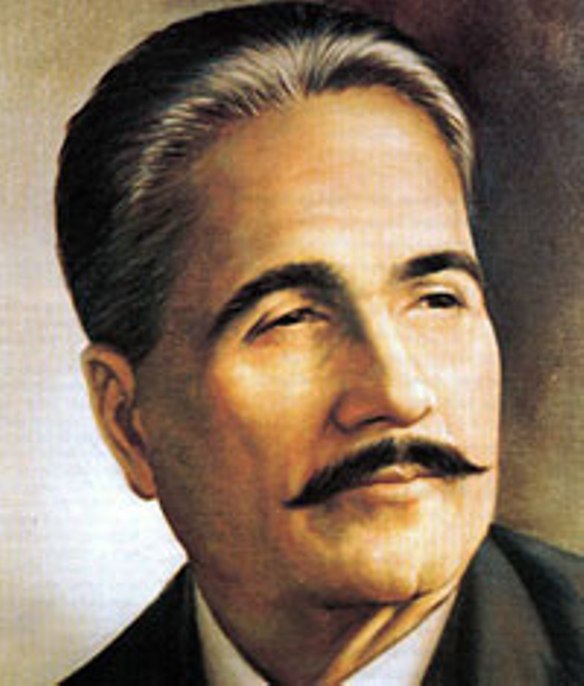 Sir Muhammad Iqbal (9th November 1877 – 21st April 1938) also known as Allama (Scholar of Highest Rank) Iqbal was a philosopher, poet, politician, and a social reformist. He is widely acclaimed to have inspired millions of Muslims to demand a separate homeland from the British Empire in India.

Religious scholar and Sufi Master, Iqbal’s literary works in Urdu and Persian are largely based on teachings of the Holy Quran.  He propagated self-respect and self-realization and reiterated the need to revert to Islamic values.

Allama Iqbal is officially regarded as National Poet of Pakistan, Shayir-e-Mashriq (Poet of the East), and Hakeem-ul-Ummat (Sage of Ummah).

A Barrister from Lincoln’s Inn, England and a PhD in Philosophy from Munich University, Allama Iqbal was a strong proponent of the political and spiritual revival of Islamic civilization across the world, for which he travelled and delivered lectures at length across the continents. His famous speeches have been collected and published under the title: “The Reconstruction of Religious Thought in Islam”, a collection of esoteric lectures delivered between 1928 – 1930

Allama Iqbal encouraged the younger generation for fresh interpretation of Quran and the Sunnah and discovers mutual harmonies that would enable Muslims to learn modern science and use science and technology to improve their material existence.

Allama Iqbal started writing poetry from his school days and was in full swing at the time of freedom movement in India. His fame started with his poetry which was written in the classical style for public recitation. Through ‘poetic symposia’, his poetry became widely known, even among the illiterate masses. Almost all the cultured Muslims of his own and later generations came under the spell of his poetry, one way or the other.

In 1922, he was knighted by His Majesty King Georg V, giving him the illustrious title of “Sir”.

Allama Iqbal passed away on 21st April 1938 but to date millions of fact-finders remain mesmerised with the beauty and depth of his poetry. He simplified the philosophy of life, de-mystified the purpose of our human existence, and turned the teachings of Islam into an eternal message ready to be interpreted by the masses.

For those unable to comprehend Urdu and Persian languages, a simple translation into English will certainly facilitate the understanding of Allama Iqbal’s message. Let us focus on selective topics where the Great Maestro exposed his inner self.

Like everyone, Iqbal dearly loved his mother.  On her untimely death in 1914, he became restless and expressed grief in the form of Eulogy.

Who would wait for me anxiously in my native place?

Who would display restlessness when my letter fails to arrive?

I will visit thy grave with this complaint,

Who will now think of me in midnight prayers?

All thy life thy love served me with devotion,

When I became fit to serve thee, thou hast departed!

Muslim Youth’s spiritual deterioration and distancing from Islamic teachings was of utmost concern to Allama Iqbal. Youth being the architects of our future, Allama Iqbal addressed the Youth of Islam as follows:

O Muslim youth! Have you ever used your prudence?

What was that sky of which you are a fallen star?

That nation has nurtured you on its lap of love,

Whose feet had trampled the crown of Darius’s head?

Your ancestors from the deserts of Arabia ruled the Universe,

Even in poverty those men of God were so high-minded,

That the rich could not avoid charity for beggar’s fear,

What should I tell you what those wanderers in wilderness were,

If I wish to present their picture in words I sure can,

But that scene is beyond the comprehension of your imagination,

It’s such a pity you have no correlation with your ancestors,

Alas we have wasted the heritage obtained from our ancestors,

The aftermath of World War I brought down the Ottoman Caliphate and placed the Muslim Ummah in stark adversity. Allama Iqbal vehemently protested against the subjugation of Arabia by the Western Christian authorities. He encouraged the Muslim Ummah to wake up from deep sombre and have faith in their strengths. He spread the message of hope and courage to stand-up and struggle collectively for “The Renaissance of Islam” :

This secret is in-comprehensible to likes of Sani and Farabi,

The storm of the West has made the Muslim into a real Muslim,

Only the upheavals of the sea bring the pearl’s beauty to its perfection,

The Muslim is to be endowed again from the God’s Court with,

If some slumber is lurking still in the flower buds,

“Strike the beat harder if the taste for music is lacking”,

Jump restlessly in the garden, in the nest, in bowers,

It is impossible to deprive mercury of its restlessness,

Why should the eye used to chaste things see coat of arms,

When it is able to see the valour of the Gaza’s soul,

O God, light the candle of Longing in the tulip’s heart,

Make every speck of garden’s dust a martyr searching for the Truth,

The Book of the Muslim nation is being organized again,

This Hashemite Branch is surely going to blossom again!

As the dawn is produced after destruction of myriad’s of stars!

Allama Iqbal was of the firm belief that “self-respect and self-realization” can mobilise our inner energies and provide us the real dynamics of success.  His poetic calls can still warm up blood in the dead. His mesmerising poems can still light up the spark into the lives of the gloomy and the depressed.

Sing O Nightingale so that with your modulations,

The falcon’s heart in the pigeon’s frail body be produced,

Concealed within your heart is the secret of life,

Relate to the Muslim the traditions of pathos of life,

You are the potent hand and the word of the Eternal God,

O imprudent one! Develop Faith as you have been overcome with doubts,

The Muslim’s destination is beyond the azure coloured sky,

You are the caravan the dust of whose trail is stars,

You are the Final Message of God and you are eternal,

Your origin is from Ibrahim, you are the world’s architect,

Your nature is the custodian of all life’s possibilities,

So you are the touchstone for world’s hidden jewels,

From the material world to the Eternal world,

You are the gift which the Holy Prophet took,

The history of the Muslim nation reveals the secret,

That you are the protector of the nations of Asia,

Learn again the lesson of Truth, Justice, and Bravery,

You are to be entrusted with the world’s leadership,

That there should be universal brotherhood and abundant love

According to Allama Iqbal, Faith in Allah SWT is divine enough to energise our conscious abilities and sub-conscious capacities. Through inner faith we can achieve the impossible.

What are all these except unravelling of the secrets of Faith,

When Faith is created in this earthly ember,

It itself creates wings and plumage of Jibrael,

Neither swords nor plans are of any avail in slavery,

Chains are cast away when taste for Faith is created,

Can anyone assess the strength of his arms?

Destinies are changed by the Believer’s mere glance!

Mysteries of life and the purpose of human existence is Allama Iqbal’s specific area of interest. He solves this philosophy through impeccable simplicity.

Human life is no more than a breath. It is alive only as long as it is flowing. In the same way human life, which this wave sustains, is worth its existence only as long as it is active. Man is the only secret in the universe. This secret is that though Man apparently has humble origins, being created from soil, he has the potential of being Allah Almighty’s Vice Regent on earth.

The life of Man is no more than a breath,

Breath is a wave of air, it is no more than a flow,

The flower was depicting life as a smile but,

The candle said it is no more than a cry of grief,

The secret of life is a secret till there is a confidante’,

When it is open, it is nothing more than the confidante’,

Somebody should ask the pilgrims of Ka’bah, O Iqbal,

Is the gift of the Haram nothing more than Zamzam?

The last verse is sarcastic and carries the lesson that the real gift of the Pilgrimage to Ka’bah is that the pilgrim should return from there after sacrificing his arrogance, greed and jealousy, after stoning the Satan and controlling the evil in himself, and hence gaining the purity and innocence of a newborn child.

Allama Iqbal was a Sufi Master. Let us look at how he studied the relationship between intellect and the heart and described the controversy of “Aql o Dil”.

One day Intellect said to the heart,

A guide to the misguided ones I am,

Being on the earth I reach up to the sky,

Look, how deep in comprehension I am,

Guidance on earth is my sole occupation,

Interpreter of the book of life I am,

The Manifestation of God’s Glory I am,

You are only a drop of blood, but,

The invaluable ruby’s envy I am,

Hearing this, the heart said, All this is true,

But look at me as well, what I am,

You understand the secrets of life,

But seeing them with my own eyes I am,

Concerned with the manifest order you are,

And acquainted with the inward I am,

Learning is from you, but Divine Knowledge is from me,

You only seek Divinity, but showing Divinity I am,

Restlessness is the end of Knowledge,

But the remedy for that malady I am,

You are the candle of the assembly of Truth,

Lamp of the Divine Beauty’s assemblage I am,

You are related to time and space,

The bird recognizing the Sidrah I am,

Look at the grandeur of my station,

The throne of the God of Majesty I am!

We all realize the need for Islamic Renaissance in this millennium. In this respect, Iqbal’s poetry is more relevant now-a-days than ever. Let us re-evaluate the message of Allama Iqbal and learn to cure our short comings.

“Given character and healthy imagination, it is possible to reconstruct this world of sin and misery into a veritable paradise” – (Stray Reflections; Private Diary of Sir Muhammad Iqbal).

Rohail Khan, senior banker and social activist, is working in KSA since 1993. He is actively developing communities through literature, culture, and philanthropy.