1.    Millions of Bangladeshis found a reason this time to celebrate when Prof Yunus appeared in the digital screen with the adorable trophy.

2.    Bangladesh, a Muslim majority nation of over 170 million population, has never succeeded in the Olympic battles for medals. 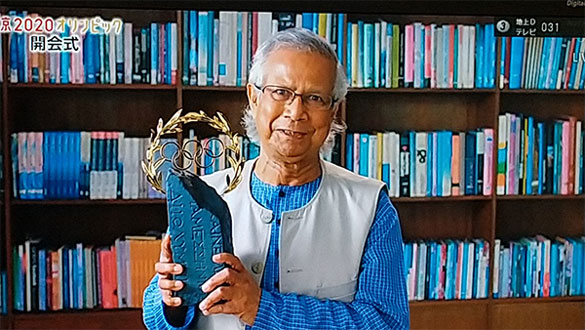 With Nobel peace laureate Professor Muhammad Yunus receives the Olympic Laurel award at the opening ceremony of  32nd Games of the Olympiad Tokyo 2020, organized under the shadow of Covid-19 pandemic with no audience on the ground, his motherland in south Asia incorporated its name in the history of Olympics.

The athletes from Bangladesh may not win a medal in the Olympics till date, but millions of Bangladeshis found a reason this time to celebrate when Prof Yunus appeared in the digital screen with the adorable trophy to become the second awardee, definitely first Asian, after Kenyan Olympian Kip Keino.

Billions of sports enthusiasts across the globe witnessed the moment when the creator of Grameen Bank of Bangladesh was honoured with the award virtually, as Prof Yunus did not visit Japan due to the pandemic, on the evening of on 23 July 2021 at the restricted opening ceremony of Tokyo Olympic Games.

“I am honoured and overwhelmed to receive this Olympic award, which is so special to me and my country,” said the economist turned revolutionary banker turned social entrepreneur who mentors Yunus Centre, a global hub of social business, highlighting its mission to create sustainable social enterprises not just for profit, but to solve people's problems.

Speaking to this correspondent from Dhaka, the soft-spoken Bengali gentleman appreciated the International Olympic Committee (IOC) and wished a success to its mission to transform the world to a peaceful place for the entire human race through the sports. Prof Yunus reiterated the pledge to create a world of three zeros comprising nil carbon emission, nil wealth concentration to end the poverty and once for all, nil unemployment by unleashing the power of entrepreneurship in everyone.

Initiated by the IOC to honour outstanding individuals for their achievements in education, culture, development and peace through sports, the Olympic Laurel is intended to honour awardees at the opening ceremony of  each summer Olympics, where social change maker Keino  was honoured in 2016 Rio de Janeiro Olympic Games.

Bangladesh, a Muslim majority nation of over 170 million population, has never succeeded in the Olympic battles for medals. The country used to send their representatives to the summer editions of Olympic Games mostly with wildcard entries. In Tokyo, six athletes under the guidance of Bangladesh Olympic Association are participating in various disciplines.

The innovative Bangladeshi banker, who made small loans available to the poorest of the poor without any collateral, was selected for the honour for his extensive works in sport for development, including founding the Yunus Sports Hub, a global social business network that creates solutions through sport. 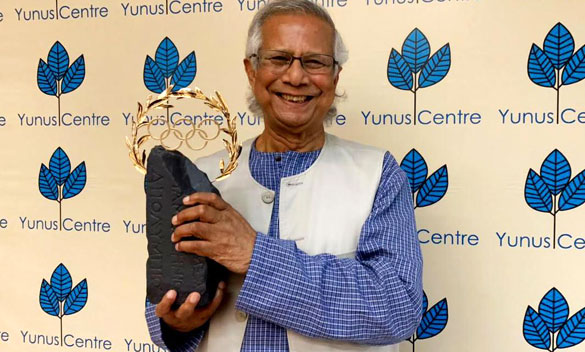 Prof  Yunus also collaborated with the IOC on several projects, including educational elements of the IOC young leader’s program focusing on human development through peace and sport. He not only shares the wealth of knowledge with the Olympic community, but also helps athletes in their post-sport career development to become socially responsible entrepreneurs.

IOC President Thomas Bach commented that the recipient of numerous international awards for his ideas and endeavours including Nobel peace prize in 2006, Prof Yunus remains a great inspiration for all sharing the vision how sport can contribute to the UN’s sustainable development goals.

Born in 1940 to a middle-class businessman’s family in Chittagong of south Bangladesh, Prof Yunus studied in Chittagong  and Dhaka and then reached Vanderbilt University with a Fulbright scholarship to pursue higher study on economics. He received his PhD in economics in 1969 and after some years teaching there the young Bangladeshi scholar returned to his country in 1972, just one year after Bangladesh was born.

“Sport brings all human strengths and emotions into play. That gives it enormous power,” said Prof Yunus adding that the Olympic unites the entire world in peaceful competition, celebrating unity in diversity.

If we embrace a new social and environmental awareness, where the economy is not a mere science, but a tool to optimise the potentiality of individuals, he claimed ‘we can create a new world’.

The octogenarian reminded that the novel corona virus has brought numerous challenges to various events including the extravaganza like Olympics, but it also fetches a huge opportunity for the human race. Now it is necessary to put an individual back at the centre and work together to rebuild tomorrow, stated the author of ‘Building Social Business’, looking not to the past but to the future.

While addressing the limited number of physical audiences with billions of television viewers around the world, the IOC President commented, “Today is a moment of hope. Yes, it is very different from what all of us had imagined. But let us cherish this moment.” He also added that selected athletes from 205 national Olympic committees and IOC refugee Olympic team arrived in Tokyo spreading the message of solidarity, peace and resilience to give everyone hope for the further journey.