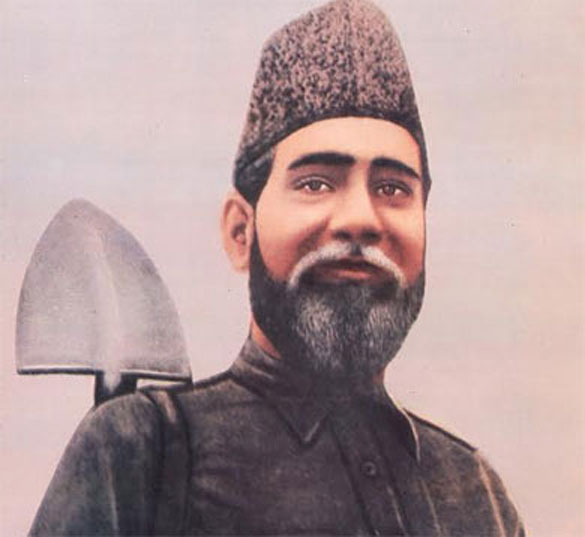 “We have SPADE as our symbol…Spade is another sign of humility and our carrying it on our shoulders shows that we are out to proclaim to the world THE DIGNITY OF LABOUR. Spade levels up the ground. We are here TO LEVEL UP ALL SOCIETY! A rich man with a spade considers that he has come down a bit to meet his poor brother. A poor man with a spade thinks that he has got a powerful weapon to strengthen him. Spade in this movement has worked wonders indeed! [Translated from Urdu]”

Allama Mashriqi was born on August 25, 1888. Mashriqi was a revolutionary, reformer, and humanitarian, who founded the Khaksar Tehrik (Movement) to bring freedom to the Indian subcontinent (now comprised of Bangladesh, India, and Pakistan). When Mashriqi became sick near the end of his life, President Ayub Khan visited him in the hospital and offered him medical treatment in Switzerland at the Government’s expense (Mashriqi did not accept the offer, as it was against his principles to use public funds for personal treatment). Mashriqi died in Mayo hospital in Lahore on August 27, 1963. His funeral procession was approximately 1.6 kilometers long and included over 100,000 people, one of the largest funeral processions in South Asian history. This article is written in honour of his 53rd death anniversary and focuses on his choice of a Belcha as the iconic symbol for his Khaksar Tehrik.

Mashriqi chose the Belcha (a spade or shovel) as the symbol of the Khaksar Tehrik. This tool became such an integral part of the Khaksar Tehrik’s image in British India (now Bangladesh, India, and Pakistan), that the movement was often referred to as the Spade Movement or Army of Spades. Why did a man of Mashriqi’s stature choose such an unconventional tool to represent his party? As it turns out, Mashriqi’s choice of a spade was well thought out and highly symbolic.

For Mashriqi, the Belcha was the perfect symbol for his party for multiple reasons, as expressed in his book Isha’arat and a piece published in Al-Islah (on July 26, 1935) entitled Qual-e-Faisal (No. 11). First, the Belcha was a labourer’s tool and had been used for centuries around the world. The selection of a working man’s tool as the Tehrik’s symbol not only reflected Mashriqi’s belief in the importance of the labour class, but also his sense of humility and simplicity.

By requiring all Khaksars to carry the Belcha as part of their uniform, Mashriqi hoped to impart these values in the Khaksars and unite them. Mashriqi believed that when all members of the movement stood together with a Belcha in hand – whether rich or poor or Christian, Hindu, Muslim, Jewish or Sikh – the differences between them would be shattered and they would grow stronger as one people and one nation. The Belcha also had a special religious significance for Muslims. The Prophet Mohammad (PBUH) had used the tool in trying situations (for example, the Battle of Trench). Taking inspiration from the Prophet, Mashriqi used the Belcha as a symbol for awakening the nation from its slumber to rise up against British rule.

Along with its religious and philosophical symbolism, the Belcha also represented the construction of the country’s infrastructure, thereby uplifting the nation. The Belcha further signified the challenging nature of this monumental task and the hard work that would be required to bring freedom to the subcontinent. The Belcha appealed to the masses; it was a powerful visual reminder that this was a movement for everyone, not just the so-called “elite.”

Finally, the Belcha served a very practical purpose for the Khaksars. As soldiers in a private army, the Belcha was the ultimate multi-function tool for the Khaksars. It could be used for defence, digging a trench, as a container to drink water, a pot to cook on, a plate to eat on, a walking stick, etc. And unlike guns or other weapons wielded by a traditional army, the Belcha could not be banned, yet it could still be used to teach soldiers basic principles around discipline and defence.

Thus, the Belcha was a most befitting selection for Mashriqi and his Khaksar Tehrik. It was the perfect reflection of the movement’s commitment to humility, service, simplicity, unity, and uplift of the masses. Indeed, it was the ideal symbol for an organization that ultimately mobilized millions to bring freedom to India. In Mashriqi’s words, “Spade in this movement has worked wonders indeed!”

Special Note: Some writers have falsely claimed (for vested reasons) that Mashriqi adopted the Belcha as his party’s symbol because he was influenced by Adolf Hitler and his Labour Corps (Reichsarbeitsdienst). Nothing could be further from the truth.

Mashriqi saw the importance of the Belcha even while he was a student in England at Cambridge University (1907-1912) and had the symbol in mind for his Tehrik in the 1920s (he wrote about this in Isharat, see Chapters 16 and 17). Hitler did not start his Labour Corps until 1934. More importantly, Mashriqi and Hitler’s philosophies were polar opposites. Mashriqi, a humanitarian, believed in the unity of the human race, regardless of religion, class, colour or creed (anyone - whether Muslim, Hindu, Jewish, Sikh, Christian or any other faith - could join Mashriqi’s Khaksar Tehrik).

There are also many examples of the Khaksars providing assistance to both Muslims and non-Muslims, including the Khaksars saving lives during the Bengal Famine of 1943 and the Muslim-Hindu-Sikh riots (at the time of partition). And while the Khaksars used military-style activities as a last resort to liberate the country from foreign rule, they never believed in the destruction or massacre of people.

Nasim Yousaf, an author and historian, has written 15 books and digitized several files of rare documents related to the Indian sub-continent’s history. He has been featured in various American publications (including Marquis’ Who's Who in the World) and his books are available in top research and academic libraries around the world.