Shams Ur Rehman Faruqi - the Scholar the Poet and the Novelist: The Lasting Genius of Urdu Literature

This year was clouded by unusual scenes on every front. Literature and intellectual world too has been inflicted by the deaths of many central figures in the likes of David Graber, Robert Fisk, Asif Farrukhi, John Lewis, and John Le Carre to name a few. In literature the role and the positioning of some litterateur becomes almost invaluably relevant and the eras are defined by their presence. One such name in the Asian subcontinent is the great Shams ur Rehman Faruqi. Shamsur Rahman Faruqi (born 1935) is the distinguished Urdu poet, critic, theoretician, lexicographer, novelist who inspired a whole chain of Urdu writers after 1970s. Being adept in ilm-e-bayan (poetic discourse), he undoubtedly has sparked great deal of lively debate and sustained discourse in the fading shades of literary adaptability to the stresses of political and cultural blocks which is quite rare in contemporary times. He initiated the movement of putting to test the archaic compositions of Urdu literature in particular to the modern and current methods prevailing in the world literature. No other person in the contemporary settings could have done justice to this experiment than Faruqi itself. The fundamentals in the structure, and layered constructs of literature are always determined by their political, ideological and methodological rigor of the times the language thrives in. Faruqi wholeheartedly serving the cause of putting the name of Urdu literature in the global literary map; he always busied himself with making Urdu rich and active by introducing the spirit of revivalism. The intellectual eloquence and ever flowing wisdom from Faruqi made him the lasting genius of Urdu literature. 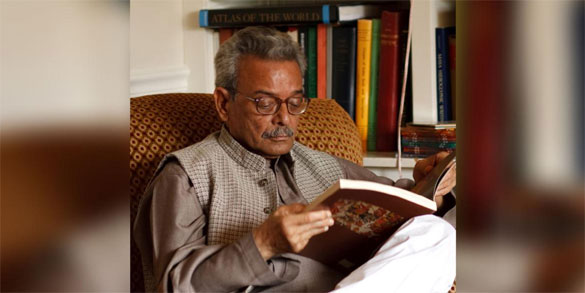 Faruqi’s uniqueness was his non-conforming stance in understanding the pre-modern and the modern eras of Urdu literature. He had profound knowledge of global literature in the realm of poetics, metaphor and signs, semiotics, linguistics, and novel, spanning the genres. He was bestowed with numerous awards and honors with prestigious Saraswati Samman to his credit as well for his ground-breaking endeavour in the form of   Sher-e-Shor Angez — a four-volume study of the 18th-century poet Mir Taqi Mir. His other works comprise Kai Chand Thay Sar-e-Aasman (The Mirror of Beauty) — a fictional description weighing at 984 pages  crafting  the life and times of Wazir Khanum,  Daagh Dehlav’s mother, in 19th century Delhi, and The Sun That Rose From The Earth. Getting inspired  early on in his writing career by the works of William Thackeray, Farhatullah Baig and Malik Ram he managed to produce the exemplary work of Kai Chand Thai Sare-Asman that is still consider as the eternal  template for novel writing in Urdu. There is the incisive and acute commentary of scenes, dialects and the emotional contours taken care of in the most sensitive and flawless style. The same mesmeric and spell-binding flair traced to the memorable pages of Sher-e-Shor Angez, it dismantled the rigid and excessive disciplining of poetic discourses and started the rigorous and at times the sharp critics of the reviewers that had been well placed at the positional patronage. To have the literature growing and adapting to the externalities and the subterranean hijacks the methods that Faruqi adopted deserve to be mainstreamed. In every genre, he had the flawless grip which flashed from his riveting comments he made. From Paul Ricoeur to Amir Khusrau and from Persian to Sanskrit Faruqi was in all ways the face of Urdu in 20th century.

He wore many hats at the same time from literary critic to novelist to storyteller. Deconstructing the poetic sensibilities of masterpieces of poets like Ghalib, Mir, Iqbal he would always have the surprising and novel facets brought to the fore. He had the distinction of being different from the tribe with his radical unravelling of technicalities of language by making the hermeneutical and phenomenological basis of language, part of the critical framework of his work. This is apparent from the titles of his treasured contributions he has made in the literature from “Poetics of Coherence: Notional, Real, and Necessary Connections in Poems of Two Lines”( A hand-out from a Penn talk on Oct. 8, 1997) to “Mazmun, Ma’ni, Isti’arah” (Theme, Meaning, Metaphor), a lecture delivered in March 2020at Aligarh.

His standout contribution in enriching and rediscovering the distinct and almost endangered category of dastangoi style of storytelling has been unparalleled and this heroic adventure almost took him more than a decade. It gives us the sincerity and perseverance of a person who would eat, think and sleep literature thus surely falling in the set of persons who are rare in matters of their cherished feats and intellectual acumen. In one of his interviews curated for New York Times he states “Of course, I was incomparably enriched by my love for pre-modern Persian and Urdu poetry. Later, what went into my unconscious, more than I realized, was my reading of the Dastan of Amir Hamza, a series of loosely linked oral romances whose 46 volumes and 42,000-plus pages and more than 20 million words I read, and in some cases reread, since about 1980. I’ll always remain obliged to Frances Pritchett [professor emerita at Columbia University] who directed my attention to the Dastan”. One could just imagine the determination and passion Faruqi had for the literature and  its subtle engrossing themes that had been almost thrown to winds

The huge efforts and the determination of Faruqi has been the hallmark of him being the devoted warrior of Urdu. The articulateness, wisdom and the methods Faruqi applied into the Urdu literature would truly remain the guideposts for the further knowledge production and with the quintessence of Urdu being the potent force of socialisation and matter of public discourse. This legacy of relentless inquiry, questioning the power structures and always adapting to the prevailing ideas would always be the effective mechanism for developing the base for real literature as opposed to the codified and regimented mode of Urdu being sarkari zaban. On this Christmas we had to receive the sad news of Shams Ur Rehman Faruqi leaving for heavenly abode. It surely is end of an era. May peace be upon him.