Khalid Bin Waleed And His God-Given Gift of Military Acumen

The son of Waleed, one of the most respected of Quraish clan elders in the time of our Prophet Muhammad (PBUH), Khalid showed early prowess as a more than ordinary soldier, being physically very strong, aggressive in nature and extremely courageous. At the Battle of Uhud, the first of his two battles against the Muslims, his patience and military acumen kept the Quraish cavalry’s two wings (his along with that of Akrama) aloof from the battle as the Quraish infantry disintegrated on account of the relentless Muslim attack, he then seizing the moment to attack and overwhelm the critical high ground that the Muslim archers had partially vacated in direct violation of the instructions of Prophet Muhammad (PBUH), turning the prospect of Muslim victory into Islam’s first military defeat. Military tactical sense was an inborn Khalid attribute, he deployed this God-given gift later to Islam’s advantage many times over in his illustrious career. 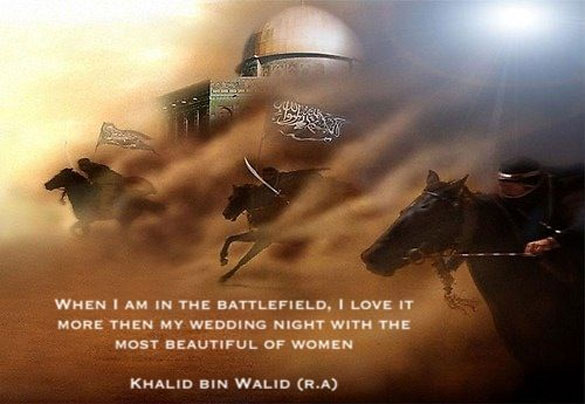 A cousin of Hazrat Omar as well as a childhood friend, Khalid turned towards Islam after the third attempt of the Quraish (along with coalition partners) to overwhelm the Muslims (at Madina) had failed (the Battle of the Ditch). Khalid had been deeply impressed with the Prophet’s (PBUH) stratagem and tactics that had stymied Quraish efforts despite their much superior numbers. He came to admire the ability of the Muslims to withstand adversity with patience, marveling at the Muslims tenacity and courage. After deep meditation and inner counsel and despite the alternate entreaties and threats of his clan, Khalid journeyed to Madina and submitted himself to the Prophet (PBUH) on May 31, 629.

Prophet (PBUH) was delighted by Khalid’s conversion to Islam. Much admired by Prophet Mohammad (PBUH) even when he was an enemy, the Prophet (PBUH) foresaw in Khalid’s leadership qualities and military acumen, Islam’s future conquests but also had to deal with Khalid’s aggressive nature and the ruthlessness with which he pressed home military advantage on the battlefield, having difficulty with the Muslim concept of quarter after the hostilities had ceased and peace had been won. At times the Prophet (PBUH) had to admonish or restrain Khalid, even pardon him, such as after the tragic events of Bani Jazima when Khalid exceeded his mandate and just managed to withstand the intense criticism by the closest Companions of the Prophet (PBUH).

As a military personality of his time, Khalid has virtually no equal in Islam. During those years military commanders could not sustain their dominance by brains alone, they had to physically cow down the opposition! Many battles were lost or won on the strength of individual battles between the leaders of the opposing forces or even their chosen champions. Khalid was repeatedly wounded, many times grievously. Only after the Prophet (PBUH) exhorted him at the Battle of Humein (Feb 1, 630) that he shrugged off his serious injuries and regained control over the Bani Suleim.

Not being a member of the Blessed Ten, the inner circle and original Companions to the Prophet (PBUH), Khalid ranked very low in seniority among the Muslims. Recognizing Khalid’s superior military abilities, Prophet (PBUH) put him in command over various military expeditions. Taking over from the slain commanders at Mauta, Khalid broke off engagement to avert a bloody defeat, thus effecting the first general withdrawal from the field of battle in Muslim history and evoking great annoyance among the Faithful. Recognizing Khalid’s wisdom, the Prophet (PBUH) stifled criticism by conferring on him the title of Saifullah, the Sword of Allah. Members of the Prophet’s (PBUH) inner circle served cheerfully under Khalid, such was the discipline inculcated in the early days of Islam.

After the death of the Prophet (PBUH) Hazrat Abu Bakr re-organised the army under 11 corps each with its own Standard, giving command of the most powerful corps to Khalid, with clear instructions to swiftly seek out and destroy the more powerful of the forces assembling against Islam. This Khalid successively and successfully did, first Tuleiha at Burakha (mid-September 632) then Malik Bin Nuweira (without a fight) at Butah, finally Musalima the Liar at Yamama (Dec 632) wiping out the traces of Apostasy in his area of operations, more difficult a task than that given to all the other 10 Muslim corps combined. As usual Khalid did not remain free of personal controversy, those jealous of his success became his lifelong detractors, this time again the benefit of doubt was given to the great general but he had to pay out blood-money to the heirs of Malik Bin Nuweira. This incident gives credibility to Khalid coming across as a human being, extraordinary perhaps, but as a flesh and blood personality.

After the collapse of the Apostasy, Hazrat Abu Bakr then turned his attention to the Persian Empire, particularly the Iraqi Province of this once great imperial civilization spanning over hundreds of years. In great battles, Khalid destroyed successive Persian armies that were sent against him, the bloodiest battles being at Walaja and then at Ulleis (an adjacent river became known as the River of Blood). In battle after battle, Khalid’s outstanding leadership was on display, his physical dominance over his enemies, both in individual battle and in the frontline of his columns was only superseded by his military genius in the strategic ploy of not allowing the enemy to concentrate, his tactical conduct of the actual battle and the superior employment of his cavalry columns. Brave soldiers, the Persians were led by able generals and were logistically well taken care of. Facing the lightly equipped Muslims, they were handicapped to their detriment because of lack of mobility. In short order the Iraqi Province came under Muslim tutelage though a number of attempts by the Persian Emperor to regain his lost territories had to be put down. As the Iraqi campaign wound down, an important messenger arrived from the Khalifa, Hazrat Abu Bakr, in late May 634. The Muslim army commanded by Abu Obaida against the Romans in Syria was in danger of being overwhelmed. Khalid half his army to go to his succour, leaving the command in Iraq to Musamma. To reach faster Khalid took his entire army through an unknown route through a waterless desert, finding water only when they had reached the utmost limit of their endurance.

In the areas now comprising Syria, Palestine, Israel and Jordan, Khalid took over as Commander-in-Chief from Abu Obeida and fought a series of battles including the siege of many Roman forts. The two battles that stand out are Ajnaidan and Yarmuk. Hazrat Omar who succeeded Hazrat Abu Bakr, (died Aug 22, 634) was an austere and inflexible disciplinarian who did not take kindly to the indiscretions and excesses of the Muslim commanders in victory, his particular disapproval being reserved for Khalid, maintaining that as the Commander-in-Chief of the Islamic military arm, Khalid had to set an example of nobility and probity. Rather careless in this respect, Khalid tended to be over-generous in the distribution of largesse. His detractors evinced concern whether the gifts came from Khalid’s own wealth, which was immense because of the war booty, or out of the State’s coffers. To set an example of strict adherence to Islamic principles and to destroy the feeling that victory was because of Khalid rather than because of Islam, one of Hazrat Omar’s first acts was to remove Khalid and appoint Abu Obaida, one of the original Companions, in his place. Since Khalid was in the midst of the siege of Damascus Abu Obeida gave him the Khalifa’s letter only when the campaign was over so that the change of command would not affect the course of battle to the detriment of Muslims. Khalid was shocked and so were the soldiers of this great army. He had won many victories for Islam by his military exploits, instead of being rewarded for his services, he was being punished! Such was the iron discipline of this outstanding man that he willingly gave his loyalty to Abu Obeida and served under him without protest. Very fond of Khalid, Abu Obeida held him in great esteem, this helped in maintaining mutual trust and confidence at the highest levels of the Muslim military hierarchy.

The greatest battle of Islam Yarmuk, one of the world’s decisive battles the Muslim army faced a Roman horde sent by the Emperor Heraclius several times their size.  They were annihilated after an epic seven-day battle. The Muslim contingent of 30,000 suffered over 4,000 dead with almost all wounded but almost 200,000 of the Roman army comprised of Armenians, Christians, Arabs, Franks, Azeris, etc perished on the battlefield and in the mad rout in the Wadi-ur-Raqqad (The Raqqad Gorge). Other than raw courage, this battle displayed the complete spectrum of Khalid’s genius from the strategic sense of selecting the right battlefield, the tactical employment of his numerically superior forces by concentrating at critical points and the exercising of patience in preserving his reserves till the appropriate time. He only sent in Zarrar with his cavalry at a precise moment, ensuring overwhelming victory that finished the Roman Empire in the region. Though nominally Abu Obeida was Khalid’s commander, yet realizing his own military limitations in the face of the enemy’s overwhelming numerical superiority, he had given over the battlefield command to Khalid in the greater interest of Islam. Instead of being peevish, Khalid willingly, handed back that command to Abu Obeida once the battle was over. Such was the level of self-sacrifice in Muslim leadership in the early days of Islam.

One of the greatest of human failings is all pervasive jealousy born out of personal frustration at the relative success of others. Today’s would-be Khalids, some of whom have never been in combat, tend to show off their bravado off the battlefield through glib-talking among convivial friends, building up ill-deserved reputations for “soldiering” among the more impressionable. The general good of the country or the army is superseded by their attempt to get personal satisfaction by conspiring against those who may have been crowned with success, spreading falsehood, both of individual and universal nature. Khalid was a proven battle-tested military hero, replete with innumerable victories and yet he obeyed the command of his superiors without question, keeping his bitterness to himself, lest he cause dissension among the Muslim ranks and file. Islam is alive today partially because of the selflessness of this great military champion of Islam and his refusal to let his personal dismay harm the greater cause. Khalid set an example of discipline that must be emulated.

Frustration and greed are the two great catalysts, either taken together or separately, the frustrated conspire against those who are blessed with more, materially, intellectually and spiritually. This amazing man fought 41 major battles in 15 years, 35 concentrated in the last seven. Unfortunately, Islam’s greatest hero, champion of countless physical combats on the battlefield, fell victim to this unseen nemesis.  In this digital age social media is used to frequently carry false tales as a blackmail weapon.

Despite being consigned ultimately into oblivion without any appointment whatsoever, Khalid’s exemplary conduct in adversity till his death in 642 AD set an example of discipline that is a magnificent obituary by itself. The stoic nature of his patience exists even today as a model of obedience. Our Army thrives on strict obedience up the chain of command. Our country is on strong foundations primarily because of their steadfastness. These who desire nothing better than to destroy this country will certainly move Heaven and Earth to cause dissension within the ranks of the Pakistan Army, trying to sabotage the bedrock of this institution. Some of our naive people may even become willing tools of this ploy. Very much like the Germany of the late nineteenth century, Pakistan is an army with a country, as long as Khalid-like strict discipline remains a hallmark of this profession, no one can touch this country.

Ikram Sehgal is a defence and security analyst