Walking In the Footprints of Sir Sayyid Ahmad Khan

Walking in the footprints of one of the greatest educationist reformers in South Asia was a huge intellectual gift for me. I am on the project, led by Professor Akbar Ahmed, called “Journey into Europe” and, therefore, I stayed in London’s Goodenough Club – I was in the same building in which Sir Sayyid Ahmad Khan had once lived (my stay was doubly meaningful to me as Sir Sayyid Ahmad Khan is my relative from my father’s side). Visitors to Mecklenburgh Square can see the plaque on the building honouring his stay and those who have access to the building can see his portrait in the corridor as you enter. 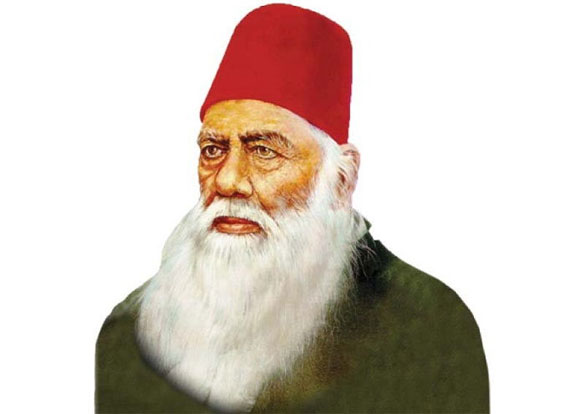 Single-handedly, Sir Sayyid Ahmad Khan (1817 – 1898) led the Muslims of the Subcontinent towards a modern Muslim identity. Inspired by his visit to the University of Cambridge in England, he set up a University for Muslims in Aligarh. From this institution came leaders, prime ministers, policy makers, historians, scientists and so forth. In the colonial time when there was deep suspicion of “the Other” especially after the bloodbath of 1857 when Muslims were being persecuted some Muslims were distancing themselves from all that was foreign, especially British education, Sir Sayyid Ahmad Khan encouraged Muslims to progress and not to hold back but to educate themselves, learn English, and develop better relations with the other in order to create deeper understanding and better communication. The idea of Pakistan came from Aligarh – the majority of the people in the Muslim League party that moved the motion for the creation of Pakistan were from Aligarh.

In Tahzib-al-Akhlaq (meaning “Social Reform” or “Moral Reform”), a journal he founded and led, Sir Sayyid Ahmad Khan wrote articles calling for the people of the Subcontinent, especially the Muslims, to leave behind blind imitations of culture and use reason and logic to lead more meaningful and thoughtful lives. He argued that if the people of the Subcontinent (Muslims and Hindus) continued to progress asymmetrically with some following old traditions and superstitions and some progressing then this would be like the example of a disabled person with one eye. But if both religious “communities advanced side by side” and developed together with the vision and thought to move forward through knowledge and education then they would be, in his own words, like a beautiful bride: religion, he argued (and I agree) is not so that we begin to hate “the Other”, but that we look at perceived others as our brothers and sisters (after all we, humankind, are all the children of Adam and Eve/Bibi Hawa and, therefore, kin to each other). (See Selected Essays by Sir Sayyid Ahmed Khan Translated from Urdu by John W. Wilder, 2006). In Sir Sayyid’s words from Taasub, from the first edition of Tahzib al Akhlaq,

“We need to be unfaltering in our faith, but refrain from prejudice. All mankind are our brothers, thus it is obligatory for us to love them, care for them, develop friendship with them as it is our primary duty.”

“Of humanity’s meanest traits, prejudice is the worst. Prejudice spoils good deeds. Those who have religious prejudice, the characteristics of human excellence, are utterly lacking in justice and fairness.”

Although, I wholeheartedly agree with Sir Sayyid Ahmad Khan’s vision of infusing self-confidence and a positive attitude towards others and self in the people of what was “the Subcontinent”, I would also add that our local indigenous identity is highly valuable: we must learn to celebrate diversity while maintaining a sense of clarity in our unique identity within our South Asian Pakistani context.

The Centre for Dialogue and Action (CD&A) at FCC in Pakistan, of which I, humbly, have the privilege of being the founding Executive Director, has successfully taught its first pilot “Diversity Course” and just begun its second cycle of courses under the direction of a hard-working CD&A team – one of the classes taught by Professor Sikandar Hayat focuses the students’ attention on the inclusive tolerant vision of Pakistan’s founding fathers, including Sir Sayyid Ahmad Khan and the Quaid-e-Azam. These leaders had a vision of a modern Muslim society with rights for every citizen regardless of race or religion and above all the respect for law and order; considering the chaos of so much of the Muslim world it is a vision worth reminding the world of. Leaders and teachers need to remind students and the public of the alternative model— of tolerance, of strength and progress through peace-education which every citizen of Pakistan deserves in order to progress as good citizens of Pakistan and of the global world.

Sir Sayyid Ahmad Khan and the Quaid were clearly educated men of vision and above all they were great bridge-builders between different peoples and nations. This Journey into Europe project as well as the CD&A’s Diversity Courses at FCC are different examples of how, through research and teaching, we can explore and encourage people in the modern world to live side by side more peacefully. It is rich fieldwork material for teachers and students of peace building courses and it is a valuable alternative for a world in which the cacophonous voices of hate and anger are unacceptably far too loud.

Dr Amineh Hoti is the director of the Centre for Dialogue and Action at FC College in Lahore. For details on the project Journey into Europe, please see journeyintoeurope.com