1.    Allah the Most Compassionate is the guide of all human beings life and death.

2.    The righteous beings like Imam Ali Ibn Abi Talib and Imam Hussain (AS) take life as a journey full of trials and tribulations

3.    The principles for which the martyrdom of Imam Hussain (AS) at Karbala happened are almost forgotten.

4.    It will be better for us to take the righteous path specified by the martyrdom at Karbala than establishing our self-made religious cultural and social ethos.

Allah the Most Compassionate is the guide of all human beings life and death. We rejoice in the birth and grief of the death. In worldly parlance, we see life as a meeting and death as a departure whereas according to divinity life is a journey full of trials and tribulations and a temporary phenomenon whereas death is a route to our permanent heavenly abode. The common man looks at life and death from his point of view as happiness and sorrow.  Humankind very well knows that all those who have taken birth will have to die as the Holy Quran says: Every soul will taste death - Surah Ali 'Imran – 185 but they tend to live as if it is their permanent abode.

Spiritually divine and blessed people live like Ali (AS) who battled his whole life for the establishment of righteousness and the just rule of the law, formulated by Allah, the Most Gracious and followed by the Holy Prophet (SAW), on the land.  And those who follow the path of the Quran and Sunnah, die like Hussain (AS) for the sake of Islam, the religion of Allah, the Most Gracious and the Sunnah established by his maternal grandfather, Prophet Muhammad (SAW). The righteous beings like Imam Ali Ibn Abi Talib and Imam Hussain (AS) take life as a journey full of trials and tribulations and fight their way to heaven treading the righteous path guided by Allah the Almighty and His Messenger Prophet Muhammad Pbuh. Righteous people take life as a journey and death as a destination.

Imam Ali (AS) was a man of the letter.  He is regarded as an exegesis to a range of disciplines - from theology to calligraphy and numerology to law and mysticism. He is regarded as the founder of spiritualism. Prophet Muhammad Pbuh was aware of his genius and, perhaps, because of this reason he called him the 'gate to the city of prophetic science’. Prophet Muhammad (SAW) says:

“I am the Master of the revealed letter (of the Quran), and ‘Ali is the master of the spiritual hermeneutics.” (Hadith quoted by Muhammad Ali Amir -Moezzi, The Tafsir of al-Hibari)

“Ali b. Abi Talib is the one who has the knowledge of the exoteric (Zahir) as well as of esoteric (Batin).” (Narrated by Ibn ‘Abbas, Sulayman b Ibrahim al-Qunduzi)

“Ali is with the Qur’an and the Quran is with Ali. They will not separate from each other until they return to me at the pool.”(Cited by Reza Shah Kazmi in his Chapter: Imam Ali, The Shi’i World, Pathways in Traditions and Modernity)

Prophetic traditions given below are the annexures of the love, respect and trust Prophet Muhammad Pbuh has shown and exhibited for Ali Ibn Abi Talib (RA).

“This (‘Ali) is my brother, my executor, and my successor among you. Hearken to him and obey him.”  (Ibn Ishaq, Sirat Rasul Allah, tr. A Guillaume, The Life of Muhammad, 118)

“God placed the children of all prophets in their backbone but placed my children in the backbone of Ali”. (Al-Tabataba’i, Muhammad H. Shi’ite Islam. Suny Press. p. 180)

“There is no chivalrous person but Ali. There is no sword but Dhu al-Fiqar.” _ Prophet Muhammad (SAW)

Sa'd b. Abi Waqqas reported that Allah's Messenger (may peace be upon him) left 'Ali b. Abi Talib behind him (as he proceeded) to the expedition of Tabuk, whereupon he ('Ali) said: Allah's Messenger, are you leaving me behind amongst women 4nd children? Thereupon he (the Holy Prophet) said: Aren't you satisfied with being unto me what Aaron was unto Moses but with this exception that there would be no prophet after me. (Book 31, Number 5914) 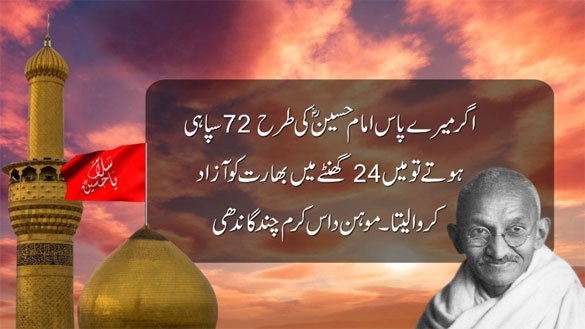 Hazrat Imam Hussain (AS), the second son of Hazrat Fatimah (Razi Allahu Anha) and Imam Hazrat Ali Ibn Abi Talib was born on 3 Shabaan 4th year of Hijri, i.e. 10.1.626 AD. Prophet Muhammad (SAW) took the baby Hussain in His pious arms and called Azan and Iqamah in his ears. Prophet Muhammad (SAW) had tears in his eyes. When Fatima (Razi Allahu Anha) asked the reason for the tears in his pious eyes, the Apostle of Allah informed her of the martyrdom of Hazrat Imam Hussain (AS).

Imam Hussain (AS) embraced his martyrdom for the establishment of the religion of Allah, the Most Gracious and the Sunnah of his maternal grandfather, the Apostle of Allah, Prophet Muhammad Pbuh. His martyrdom is the greatest battle that is won in defeat and that established the victory of divinity, truth and humanity on the evil, lies and inhuman acts of Yazid. As the saying in Urdu goes, ‘اسلام زیندہ ہوتا ہے ہر کفبلا کے بعد’, Islam took a new turn and trod the path of victory after the martyrdom of Hazrat Imam Hussain (AS).

Traditions Related to Imam Husain (AS) and His Personality

O Allah, I love him, so love him and whoever loves him - Prophet Muhammad Pbuh (Sahih Bukhari 216, Muslim 2421)

'Al-Hasan and Al-Hussain are the leaders of the youth of Paradise.' - Prophet Muhammad Pbuh (Tirmidhi Vol. 1, Book 1, Hadith 143)

'Indeed Al-Hasan and Al-Hussain- they are my two fragrant flowers in the world.' - Prophet Muhammad Pbuh (Tirmidhi Vol. 1, Book 46, Hadith 3770)

'The Prophet Pbuh took Hasan and Hussain by the hand and said: 'Whoever loves me and loves these two, and their father and mother, he shall be with me in my level on the Day of Judgement.' - Prophet Muhammad Pbuh (Tirmidhi Vol. 1, Book 46, Hadith 3733)

Need of the Hour Is to Follow Hazrat Imam Hussain (AS)

The principles for which the martyrdom of Imam Hussain (AS) at Karbala happened are almost forgotten. The religious gatherings on the occasion of Ashura in the month of Muharram (Majalis) organised by the Shia and the Sunni communities have taken the form of mere rituals. Recitation of poetry (نوحہ خانی) in remembrance of the martyrdom of the family members of Imam Hussain AS has been reduced to nothing more than a social festive gathering like all other festivals. People gather to remember the greatest martyrdom ever happened in the world, since its inception and has to remain so till the day of resurrection, but the people there do not look like mourners but alive to their worldly engagements. Rather than taking lessons to fight for the essence of truth and establishment of justice in favour of humane ethos the mourners of the day seem to just be a part of the annual routine of Muharram ul Haram.

Our time is passing through one of the most difficult times. Organisations like the Taliban, ISIS, Boko Haram and many others are more inclined to establish their supremacy than establishing Islamic traits of love, compassion, brotherhood and inclusivity. The worst part of this is that they are beheading people, abusing the human rights bestowed by Allah, the Almighty upon His creation in the name of establishing the religious rule.

It will be better for us to take the righteous path specified by the martyrdom at Karbala than establishing our self-made religious cultural and social ethos.