Reading Faiz Ahmed Faiz Fills the Vacuum in The Hearts 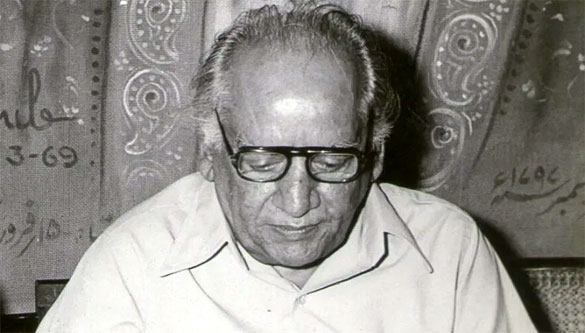 Faiz Ahmed Faiz (1911-1984) is one of the most celebrated Urdu poets of the modern times. Born during the world war first, participated as an army man in world war second, lived through the mayhem of the partition, he tried to make sense of it through poetry. Faiz was having dual masters in Arabic and English Literature. A professor of English literature, an eminent editor, and a prominent figure in the Afro-Asian writer’s movement, Faiz is considered as the leading poet in the South Asian sub-continent. He was deeply associated with the Progress Writers Association and remained always an outspoken poet in opposition to the regime. Despite his high academic excellence and proficiency, he chose the life of a ‘Rebel’.

He grew up as a poet, journalist, professor, broadcaster, army man, and a Marxist. He was twice nominated for the Noble Prize and was awarded the Lenin Peace Prize, and several other prestigious prizes. He grew as a legend in his lifetime. Faiz Ahmed Faiz is an important voice of dissent that denied to be muted.

The poet who never compromised on his ideology and never submitted to any form of tyranny—religious, political, or societal. His outspokenness and rebel-ness against the regimes resulted in many incarcerations, and also exile. He chose the long spells of imprisonment but did not bow to any form of oppression or subjection. Prison, therefore, emerges as a predominant metaphor in his poetic oeuvre. Behind the bars, he famously proclaimed:

What if my pen and paper have been snatched away?

I have dipped my fingers in the heart’s blood,

What if my lips are sealed?

Throughout his life, he conducted a relentless struggle as a poet and social activist, for the liberation of common people from oppression and injustice. While keeping the traditional essence of the Ghazal form, he changed its metaphor, paradox, and images. Albeit, he was an avowed Marxist, but he essentially remained a romantic poet-impelled by his desire beloved – the themes dominate most of Urdu poetry. And he famously wrote, this most celebrated poem, and the poem was rendered into music by famous singers. Muje say Pahlï si Muhabbat Meray Mahboob Na Mañg

That which was ours, my love

Don’t ask me for that love again

Faiz Ahmed Faiz represents the best in contemporary Urdu writing. His poetry composes diverse themes—from romantic, elegiac, and introspective to the poems focusing on social, political challenges. There is an unending literary as well as the social relevance of his poetry even today. Faiz heard the voice calling to him from the other world as in the words of V. G Kiernan ‘the voice heard by Faiz was that of Karl Marx.’ He thought poetry must be a servant of the cause, a beacon to the ‘poor humanity’s afflicted will’ not a mere display of oriental skill.

Faiz has written poetry in different phases/chapters of his life, like his early poetry, before his association with Progressive writer’s association, after the influence of Marxism, pre-prison poetry, in-prison poetry, post-prison poetry, or poetry written in exile. Yet his prison lyrics are among his best. Faiz himself accepted that ‘going to jail was like falling in love again’. Albeit, he was known as a poet before incarceration, but prison made him cross the line of fear, and begin to say openly what he believes. It was behind the impregnable fortress-like wall, that he achieved inner freedom in which there seemed no discord in what you think and what you say and do. And indeed, it was in prison that he gained the level of moral clarity and courage that was impossible to achieve in any other situation.

Faiz’s departure from that of his predecessors was that he shifted the traditional metaphors of poetry keeping the taste intact. Faiz‘s poetry is deeply rooted in its antecedents of Persian-Arabic, English, Panjabi and Urdu traditions. The distinctive feature of Faiz’s poetry is that he presents his argument or any idea of revolution not in a direct voice, which is often the mark of resistance poetry. but he used the metaphors, and images of an ongoing tradition of Urdu and Persian and made them relevant to the immediate context. For example, beloved/Mahboob becomes the long-pending freedom, longing/visal is seen as the long struggle for freedom and if we quote other examples like morning/dawn becomes the symbol of both union and freedom of people; night\shaam is seen as the reflection of darkness not only of unrequited love but ignorance of people. So we can see Faiz at its core is a broken lover\majnoon and struggle for union with Laila is transposed from personal ambition to the collective dream of oppressed people, and the light/roshani which will break through the darkness/anadera. Thus, poetry and politics become one with the same weapon of form and content recurrent in romantic as well as the poetry of witness. Injustice, inequality are key issues Faiz dealt with in his poems. His poetry inspires the society to combat capitalism, and fight against the oppressive ruling class.

For Faiz, it is the poet who nurtures the ideology of revolution in people’s minds and inspires the urge to fight and culminates the external actions. Moreover, for him to promote the revolution it is the moral duty of every individual.

His translations by great scholars like Naomi Lazard, V G Kiernan, Aga Shahid Ali, and Shiv K Kumar offers substantial material for English loving readers that how his poetry sounds and appeals. These translators loved him and wanted to take his poetry to the English world. Naomi Lazard’s bilingual translation The True Subject, V G Kiernan’s Poems by Faiz, Aga Shahid Ali’s translation The Rebels Silhouette and Shiv K Kumar’s The best of Faiz are remarkable examples of passionate engagement with Faiz Ahmad Faiz. These translations had made enough potential to attract English readership for his socio-political poetic oeuvre. Reading Faiz fills the vacuum in the hearts. Let me end the piece with his quatrain, where he claims that he will keep writing what comes to his heart:

I will go on cherishing the tablet and pen

I will go on writing down what passes over the heart,

I will go on collecting the attributes of the grief of love,

I will go on pouring bounty on the desolation of the age.

Ahsan Ul Haq is pursuing Doctorate from the Department of English, University of Kashmir.