Faiz Ahmad Faiz - an Everlasting Voice Who Refused To Be Muted

Today marks the legendary poet’s, 36th death anniversary. Today he is the most quoted poet when it comes to free speech. He is not only celebrated as a poet, but he has also been described as a person of far and wide experience, having been a teacher, editor, army officer, journalist, and broadcaster. 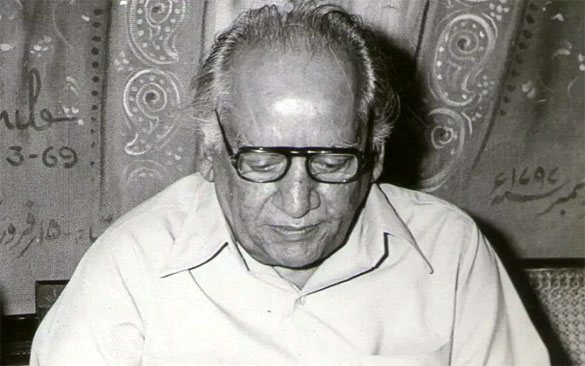 Faiz, the poet whose name is interchangeably used with love and revolution. He was called a Rebel by legendary poet Agha Shahid Ali, and named his translation of Faiz as ‘The Rebel’s Silhouette.’ Translating Faiz has been an adventurous and fascinating experience for eminent scholars throughout the world. And poetry was the part of air that Faiz breathed in his youth, enlisting himself in the caravan of Urdu poets like Ghalib, Meer, Sauda, and Allama Iqbal.

Translating Faiz into English was a herculean task, as Shahid writes in the introduction of his translation, but Shahid was not going to escape from this excuse. He wrote to Faiz asking for permission to translate him, for which Faiz agreed in affirmation. For Shahid knows how to dance and mesmerize with the words. Shahid was a poet of great eminence, and he beautifully wrote:

What does Shahid mean?

It means beloved in Persian, the witness in Arabic.

Even after thirty-six years of his demise, the poet is still sung and celebrated in different corners of the world. Be it Pakistan, India, Palestine, Africa, Nepal, Bangladesh; even in the Western and Gulf countries. Faiz is a household name, he is not known to literary and literate people only, he is familiar to common masses alike. Those who are unable to read him sing him in the fields. You may hear his poems rendered into music in private and public transport.

Faiz, a poet was such a craftsman of ghazal that he transformed every stock metaphor, and as if by the magic of his pen, brought new association into being. And here lies the beauty ‘Mujh Si Pehli Si Muhabbat Meray Mahboob Na Mañg’ can be heard on everyone’s lips – lovers and revolutionaries alike.

There are sorrows in this world other than love

There are blessings than the union of lovers.

A man with head held up, Faiz never bowed to any form of tyranny whether religious, political or social. Nonetheless, his strong commitment to revolutionize the poetry lent him into threats, tortures, imprisonments and exiles. His muse of poetry kept him alive even in the extreme times of life singing the slogans of the revolution, protest, anger and hope. And he famously proclaimed ‘I will keep nourishing whatever comes to my heart’. 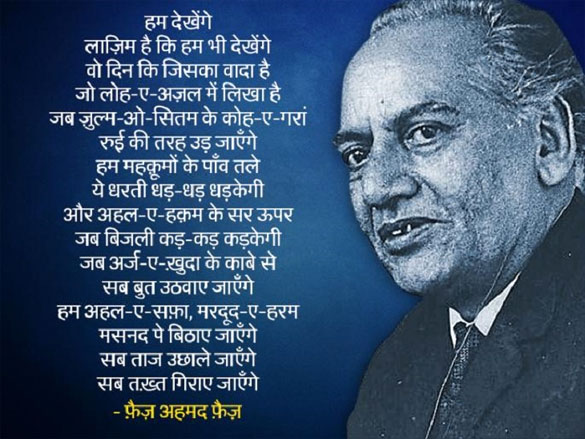 On stressing the role of an artist Faiz said, ‘the job of the poet is not only to observe, but to act’.  Faiz is an everlasting voice who refused to be muted.

The main figure of Progressive writers’ movements, he dedicated his all lot for the cause of the common man. Injustice, inequality, oppression are some of the burning concerns in his poems. Faiz is being rendered and sung by the leading singers like Noor Jahan, Begum Akhter, and Javid etc.  Faiz was well versed with Urdu, English, Persian and Arabic.  With these major languages, he produced large poetic oeuvre to be read for centuries to come. He is and will be remembered as a master poet. Certainly, Faiz is in the hearts of people, and the hearts of ones singing and mesmerizing your poetry. His poetry even after three decades is trembling the people in the seats of power. That is why English Poet P B Shelly famously proclaimed long ago ‘the poets are the unacknowledged legislators of the world.’  Some time back I read in an article that ‘poets are not prophets but often they are prophetic.’

Faiz is a household name celebrated by all sorts of people. People are never tired of his poetry, they are reading him with great zeal; scholars are studying him again and again, writers are translating him into different languages. His poems are still resonating in university campuses. His political incorrectness was a crime for regimes, who put him behind the iron grills to stop him singing, but kept writing whether in prison or outside the prison or even in exile.

Faiz was nominated for noble prize four times, unfortunately, was never awarded though was the most deserving of this prestigious award.  But for great bards awards hardly matter, for them their art matters a lot.

He died on 20th of November 1984, the news speared like a wildfire in Pakistan, and all over the world. Lovers of Faiz assembled to pay the last respect to Pakistan’s most famous poet after Allama Iqbal. Faiz is the greatest modern Urdu poet and after he is gone, there is no one of his stature on his horizon. Today, after thirty-six years after his death, he is loved by millions of people alike.

He was buried in Model Town Lahore Pakistan, the place where he lived the last years of his life. Faiz was a poet of many lands while alive, and became the poet of the world in his Death. Who Can, Other Than Faiz, Pen Down Such A Profound Couplet?

Ahsan ul Haq studies at the department of English, University of Kashmir