Birth of a Mystic, Maula-i-Rum 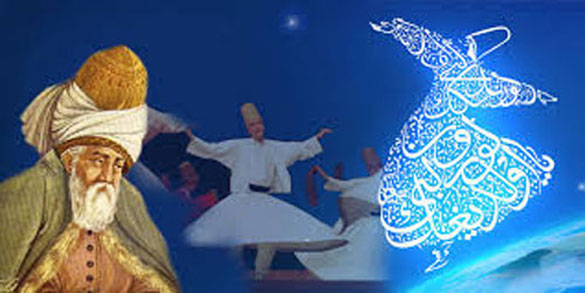 MOHAMMAD was the first name of Rumi. His honorific was Jalal-ud-Din. He became famous with the public accolade Maula-i-Rum (Master of the West).

The name of his father was also Mohammad, and so was the name of his grandfather. His father was, however, known by the honorific of Shaykh Baha-ud-din Walad. The family genealogy of Rumi was traced back to the first caliph of Islam, Abu Bakr.

Rumi was said to have been born to Shaykh Baha-ud-din on Sept 30, 1207 in Wakhsh, a small village of present-day Tajikistan. In those times, this region was known as Balkh, which also included part of present-day Afghanistan. This region became the hub of various Sufi schools. Leading Sufis Ibrahim Adham and Shafiq Balkhi also hailed from this part of the world.

Rumi Prescribed ‘Love’ As the Panacea For Moral Infirmities.

Rumi’s father was a well-reputed religious scholar of the Khwarizmshahi kingdom. The Khwarizmshahi kingdom held sway over large territories of Central Asia down to Iran and Afghanistan. The kingdom was ruled by Ala-ud-din Khwarizmshah who was wise enough to keep the Mongols in the northeast at bay. The threat remained under control due to intelligent strategic relations of the king with the neighbouring Mongols. But it was a state of cold war and any foolish act on part of the Khwarizmshahi kingdom could dismantle the geopolitical balance of Central Asia in particular, and the Abbasid caliphate and other Muslim dynasties in India, Persia, Asia Minor and Egypt in general.

On the intellectual and cultural front, just a few years before the birth of Rumi, during the 12th century, Imam Ghazali through his Tahafat-ul-Falsafa quietened the intellectual onslaught of Greek philosophy challenging the foundations of the Quranic revelations as the word of God. His Ihya-ul-Uloom fid-din and Chemiya-i-Saadat established a solid foundation for the Ilm-I-Haal (Sufism) as a source of sure knowledge and instrument of practical life in Muslim society.

The Sufi Khanqahs became well-established due to the Ghazalian synthesis of faith and reason; the latter being subdued as a mode of knowledge before the testimony of personal knowledge gained through Sufi practices under the guidance of a competent Murshid. In literature, Hakim Sanai, Khwaja Farid-ud-din Attar and Ameer Khusro in India perfected the Persian Ghazal as a potent medium of expressing emotional and mystical experiences.

The cultural milieu of the entire Muslim world was permeated with spiritual scent. The Sufi Khanqahs were present all across Central Asia, Persia, Egypt, North Africa, Asia Minor and India. This became more and more pronounced during the post-Mongol invasion of Muslim societies.

Rumi opened his eyes in the first decade of the 13th century. The cultural, political and social landscape across the Muslim societies of Asia and Africa was in a state of flux and anarchy due to the invasion of the Mongols. The political capitulation of the Abbasids in Baghdad led to further decline in the social and moral fabric of Muslim society. There was utter social chaos all around. People were running from city to city and village to village for a safe and secure existence away from the Mongols.

Mongol savagery caused countless deaths of innocent people across Muslim lands as well as the desecration of mosques, madressahs, khanqahs and libraries. On the intellectual front, Hellenic atheism posed a grave challenge to the faith of the people. Everyone was looking for a new spiritual synthesis after this grand suffering of Muslim societies.

Rumi came forward with this new grand synthesis in his classic Masnavi. He proposed that it was only ‘Love’ that can cure and heal the wounds of social, political and moral anarchy prevalent in the Muslim societies. He said in Masnavi (translation by E.H. Whinfield):

“Only he whose garment is rent by the violence of love!/Is wholly pure from covetousness and sin!/Hail to thee, then, O Love, sweet madness!/Thou who healest all our infirmities!/Who are the physician of our pride and self-conceit!/Who are our Plato and our Galen!/Love exalts our earthly bodies to heaven!/And makes the very hill to dance with joy!”

So Rumi prescribed ‘Love’ as the panacea for social suffering and moral infirmities of his times. Love has the capacity to transcend boundaries and territories. It has no Achilles’ heel. It can cure the incurable hearts and minds. The moral diseases of self-conceit and pride can be cured by love only. Love can also heal status and power-hungry egos.