The Place of Martyrdom in Islam

No Muslim denies the importance of martyrdom but to Taliban martyrdom is synonymous with suicide bombing which is prohibited and is akin to Kufr in Islam. Suicide bombing is a political tool which the terrorist organizations like Taliban, Al Qaida, and Boko Haram etc use to further their political goals. For that they need naïve gullible Muslim youth mostly belonging to poor and landless Muslim families who can be trained to serve them as human bombs against Muslim governments so that they can blackmail them.

Therefore, this article shows how the jihadists and the extremists convince the gullible Muslim youth that martyrdom in the path of God is same as suicide bombing and so the rewards that are promised for martyrs are also promised for them. This is how they are violating the teachings of the Quran that says:

But this is what they have been doing. They have coined a term ‘Ishteshada’ to give legitimacy to suicide bombing which is Haram in Islam.

We are producing the article titled, ‘The Place Of Martyrdom In Islam’ published in Nawa-e-Afghan Jihad, May 2013 in which the article has detailed the rewards for martyrdom for a just Islamic cause but have subtly tried to link the martyrdom in the path of God to suicide bombing as the Taliban do not see any difference in being killed for a just cause and blowing oneself up (committing suicide) often to kill innocent and non-combatant Muslims and non-Muslims alike. — New Age Islam Edit Desk 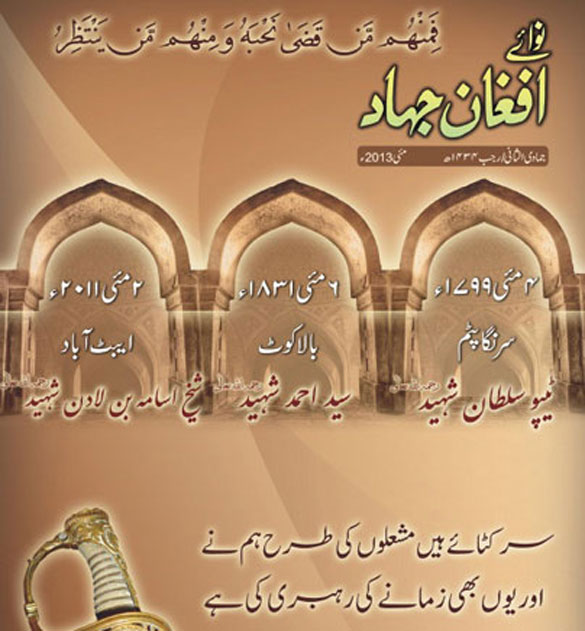 Martyrdom has the highest place in Islam. The development Islam and Muslims attained in its golden age was due to the contributions of martyrs who offered their blood to water the ever green garden of Islam. Martyrdom ensures an eternal life and makes a permanent mark in the world and its impacts are seen in the times to come. The Quran and Hadiths accord the highest place to martyrdom:

“God has bought from the believers their selves and their possessions against the gift of Paradise; they fight in the way of God; they kill, and are killed; that is a promise binding upon God in the Torah, and the Gospel, and the Quran; and who fulfils his covenant truer than God? So rejoice in the bargain you have made with Him; that is the mighty triumph.”(Al Tauba: 111)

Nothing can be more motivating to do jihad than this. God is the buyer of the life and property of his slaves and says this promise has been mentioned not only in the Quran but also in the Torah and the Gospel. This verse will suffice to describe the importance of the act of martyrdom. Imam Tabari, Abd bin Hameed and Ibn Abi Hatim have narrated on the authority of Hadhrat Jabir that when the verse was revealed, people raised the slogan of Allah u Akbar in the mosque and an Ansari companion of the Prophet (pbuh) said, “What a beneficial bargain. By God, we will never break this agreement and will not allow victory over us.” Moreover, God says:

“Whosoever obeys God, and the Messenger -- they are with those whom God has blessed, Prophets, just men, martyrs, the righteous; good companions they!”(Al Nisa: 69)

In this verse, martyrs have been granted the third place after the prophets and the just men (Siddiqueen). God also says:

In both the verses quoted above, it has been said that the death of the martyrs should not be equated with the death of general Muslims. Martyrs do not die but live after dying. After martyrdom they are endowed with a special life till the Day of Judgment.

These martyrs offer their life before God and in return they get the highest honour and respect from God. Their souls are carried on the wings of green birds and they are allowed to go anywhere in the Heaven they wish, enjoy all the bounties as per their choice and wish. There are many Hadiths in praise of martyrdom. Here are some:

Just think over it. Prophethood and that too the final prophethood! One cannot imagine the height of the honoured place of a prophet but imagine the status of a martyr that even the last prophet has the desire to be sent to the world again and again and die a martyr’s death.

This Hadith would suffice to describe the place of martyrdom. Hadhrat Anas narrated that the prophet (pbuh) said:

“No one who enters the heaven wants to come to the world again even if he gets the most important and most precious bounty on earth. But the martyr has the desire to be sent to the world ten times and attain martyrdom because he sees the rewards and honour for martyrdom.”(Sahih Bukhari)

Hadhrat Masrooque Tabayi said that I asked Hadhrat Abdullah bin Masood to explain the meaning of the verse:

He replied that he asked the prophet (pbuh) the meaning of the verse and he said:

“The souls of martyrs travel on the wings of green birds, cressets are their abodes that hang from the seat of God. They can go anywhere in Heaven and return to the cressets to take rest. Once God addressed them and asked, “What desires do you have?” They said, “The entire Heaven has been made accessible to us. We can go wherever we wish. What else can we desire?” God repeated His question thrice. When they thought that God wants them to express any desire left, they said, “We want that our souls should be returned to our bodies so that we can again attain martyrdom in Your path.” God wanted to make it public that they do not have any desire left. So when this fact was known, they were left (to enjoy heavenly life).

“There are six rewards from God for the martyrs. He is forgiven in the first phase. He can see his place in Heaven at the time of death. He is protected from the punishment in the grave and from the fear on the Day of Judgment. The crown of honour is placed on his head the gem on which is better than all the wealth of the world. He is married to seventy two houris of Heaven. His intercession is accepted in favour of seventy relatives. (Tirmidhi, Majah)”

“When people will come to account for their deeds, some people will come with their swords on their necks, blood dripping from the swords. They will gather at the gate of Heaven. People will ask, ‘who are they? (As they were not questioned and entered Heaven directly) They will be told that they were martyrs who were alive and got provisions.” (Tabarani)

Hadhrat Anas bin Malik narrated that that the prophet (said):

“Whoever is in the good books of God, does not want to return to the world after death. But the martyr is an exception because it is his desire that he be sent back in the world so that he can attain martyrdom once more as he has seen the rewards for it.” (Muslim)

Ibn-e-Mandah has quoted Hadhrat Talha bin Ubaid:  I lay by the grave of Abudullah bin Amro bin Haram (who was a martyr). I heard such a captivating sound of recitation of the Quran which I never heard before. I went to the prophet (pbuh) and told him about it. He (pbuh) said, ‘He was Qari Abdullah (martyr). You don’t know? God seizes their souls and puts them in the cressets of Sapphire and Aquamarine and places them in the middle of Heaven beneath the seat of God. When the night comes, their souls are put back in their bodies and in the morning they return to the cressets.”

This Hadith has been mentioned by Qazi Sanaullah Panipati in his Tafsir Mazhari. Hadhrat Jabir says:

“When Hadhrat Muawiyah constructed a canal near Uhad, the graves of the martyrs of the battle of Uhad needed to be replaced. When we took out their corpses, they were fresh. The teachers of Hadhrat Amro say that when the corpse of Hadhrat Jabir’s father was taken out, his hand was placed on the wound. When his hand was removed from the wound, blood gushed forth. When the hand was replaced at the wound, the bleeding stopped. Hadhrat Jabir says, ‘When I saw my father in the grave he appeared to be sleeping. The sheet with which his body was covered, was in the initial condition. Grass which was placed on his leg was in the same state though forty six years had passed since his martyrdom. Hadhrat Abu Sayeed Khudhri said, ‘After seeing the incident with open eyes there was no room for denial that when the graves of the martyrs would be dug up and a lump of soil would fall, the fragrance of saffron would spread.”

This incident has been narrated by Imam Baihaqui and Ibn Sa’d through various sources and has been quoted in Tafsir Mazhari.  Following is the summary of the place and rewards for martyrdom:

First: Martyrdom has such a high place and reward in the Hereafter that even the prophets desire to attain it.

Secondly, one who dies and gets honour peace, honour and rewards after death, he does not want to come back to the world. However, when a martyr is shown the rewards and honour for martyrdom, he has the desire to be sent back to the world again and again so that he can attain martyrdom.

Thirdly, God gives the martyr a kind of life in Barzakh. He is allowed to roam freely in Heaven and gets provision morning and evening.

Fifthly, the status of martyr does not remain constant but it gets promoted till the Day of Judgment.

Sixth, God grants the martyr special abode in Heaven that is in the form of cressets made of Sapphire and Aquamarine which are decorated in Heaven and appear like stars.

Many mystics like Sheikh Shaheed Mazhar Jan Janaan has said that since the martyr offer the sacrifice of his life, desires and body to God, in return God showers his special blessings and rewards on him which out values all the bounties of both the worlds.