Quranic Usury (Sood): A Research Analysis In The Light Of Quran 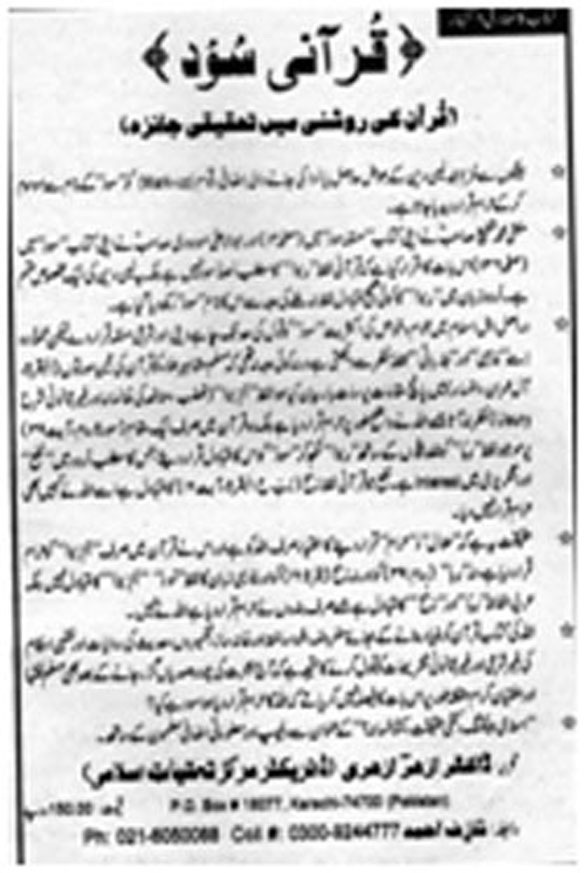 An ad in Sautul Haq magazine of Dec. 2006. Translation in English

*The current transactions with Banks, for receiving or giving the ‘make-up’ amount and calling it Sood, is branded as Haram.

*In his book on ‘the issue of ‘Sood’ Mufti M. Shafi on page 41 and Abul-A’la Maududi on page 136 of his book ‘Ribwa’ say that the meaning of  Quranic Ribwa is not Sood (usury) but it is a special form of business transaction. There being no equivalent word for it in Urdu, it is named as Sood.

*The majority elite and common people of Islam may consider it as Sood in the context of the ad-Deen as being ordained but in actual practice it is visualised as a religious and emotional issue; otherwise there was no reason for the advisor scholars of Quran would not have seen that in three chapters (Baqara, al-Imran and Nisa) there in five verses the word Ribwa appears (i.e. Usury-cruel and illegal profit) that is clearly ordained as Haram. But that the word ‘Rabaa’ which appears only at one place in Quran (Rome 30-39), by misspelling it and mistranslating it as ‘Ribwa, have equated it to the bank interest and in Urdu as Nafa-profit. Profit which is the equivalent Quranic word Rabaha (Baqara verse 16), in no place is made Haram by God.

*The reality is that the authority to proclaim anything Halal or Haram rests with God only; and He HAS ordained neither al-Ribwa as Haram, and neither the Rabaa (30-39) nor Rabaha (2-16). The Persian word Sood is not the equivalent of al-Ribawa, but of Arabic words Rabaa and Rabaha which have been declared as Haram by Man and not by God.

*Instead of making Quran the foundation; the acceptance of hypothetical, concocted, home-made commentaries, narrations of Apocrypha (Hadith) and law-based orders, the reverend Muftis have not been able to collectively come to conclusion as to what is Sood, that God had ordained as Haram.

Whenever there is talk of Bank Business, Bank loan, Bank interest and Usury, the Muslim community in particular gets itself tied up in undoable religious knots that revolve round the Quranic prohibition of al-Ribaw that is equal to Usury in English language.

To talk on this very sensitive and confusing issue to many, is fraught with danger in the best of gathering even an educated one. One’s thoughts are often turned to the Shakespeare’s comedy play called The Merchant of Venice.

Briefly, the plot of the play is based on the revenge-motive of the Jewish moneylender Shylock who is bent on destroying his supposed friend, the very rich young Merchant Antonio who stands as a guarantor for the repayment of the loan taken by his best friend.

On the due date Antonio was not able to pay back the loan.

Shylock’s condition for the repayment, though seemed comical at the time when the contract was agreed to, that he would cut “a pound of flesh” from Antonio’s body if the loan was not paid by the due date.

The story ends up all being well for the friends since the clever lawyers argued that there was no condition in the repayment contract for spilling even a drop of blood during the cut that Shylock would make.

Being impossible to achieve the above, so instead Shylock ends up ruined and all ends up romantically and happily for the others.

The motive had its main purpose, and that was to ruin the guarantor/borrower and to gain unfair, immoral and unethical gains. That is “usury” in any language and in Quran it is ordained as Haram, forbidden.

A similar story in the Indian folklore is of a money lender on Sood who takes advantage of the ignorant villagers by falsifying that twelve times one and a quarter equals thirty-five, instead of fifteen. Then goes on to add – I give you discount of five because you are my friend, give me forty and then, “there is no hurry to pay back, give me twenty five this year and twenty five next year!” The poor ignorant villager is locked in the contract for life!

These two simple examples should suffice to illustrate what usury is, that is Ribaw.

A non-economist’s laymen’s take on modern bank Interest can be given by comparing the following businesses A Supermarket and a Bank:-

.Both trading in commodities; one is trading in consumable goods and the other in money. In modern times both have to;-

·         be registered and obtain a trading licence from the State authorities,

·         have to submit certified audited accounts annually from an accredited auditor,

·         have to pay government taxes as per rates legislated by government,

·         both are regulated by State legislations in their activities,

·         have to sell at appropriate ‘mark-up’ to recover costs and legally to make profit,

·         have to make profit on business to stay viable and trading in the future,

·         The State is sometimes obliged to bailed out large scale businesses for national economy when they are at risk of failure; to minimise causing unemployment and disrupting the economy,

·         they provide services to the customers to meet their needs within the law of the land,

·         all contracts made are registered with government, which charges fees to do so.

It must be added at the outset that not everything is ….hunky dory so to say with the Banking industry from a laypersons’ point of view. The International Financial Crises IFC- of recent years is an example, particularly for borrowers to buy a house.

No legal system is full-proof. Only the society’s conscience, acceptance and obedience of the law, is a guarantee of its success. Any number of plaques on the wall saying “Yahan’ Thookna Mana Hai” it is forbidden to spit here—does not prevent the walls being painted bright red with Paan, the beetle-nut spits.

But importantly in addition the Banks help “circulate surplus wealth” in the economy. Thus, facilitating an essential Quranic outlet to comply with the ordinance to ‘circulate wealth- keep it free flowing (2-3, 36-47 NFQ 74 times)’ and not to hoard it (BKhL 4-35, 7-48, 92-11 etc,).

Many other issues at higher level of Economics, financial and fiscal policies come into play; which are too complex for a layperson to comprehend Just a few topics are suggested to draw experts’ attention as example;-

·         “Time” is an important factor in the equation for any contractual financial transaction.

·         Contracts are registered to ensure that the terms are not unethical and against the law.

·         Reserve Bank is the regulator to control money market on behalf of the State.

·         Many countries have Fair Trading Commissions to oversee business ethics.

It seems that the entire basis of economy in Quran is the free flow, that is, circulation of surplus wealth Nafaq that generates employment and results in healthy economy; and prohibition of accumulation and hoarding Bukhal of wealth that results in the ever widening gap between haves and have nots; which in itself causes inequality and therefore is the root cause of strife and disharmony in a nation. It is thus an important economic factor that spawns stratification of humanity—the rich and the poor--.which Quran advocates to eliminate.

To be rewarded richly for one’s physical and mental efforts is not forbidden in Islam, and is richly rewarded in nature when surplus wealth is distributed in the nation—through the State—that results in its wellbeing as a whole, hence there is security of social life there.

Muslim nations, although materially and material resources very rich, yet are pathetic example of poverty and destitute-third-world society in general, compared to the Western countries which have taken the distribution of national surplus wealth under the State control.

Individually too the culture of philanthropy in the West puts to shame the mega rich, monarchs and potentate Muslims. Who, it must be said are quick in building and funding religious institutions to keep the ignorant spiritually content and the churches compliant and obedient to the capitalists.

But life is much more than spirituality alone. Any wonder then that the masses – men women and children -- flock to the West by whatever means available to them, even at the risk of life and limb to live in a social welfare system—and then take unfair advantage of it, just like the locals do too.

In that sense Usury “Ribwa” is forbidden 3-121, 2-275. where only the lenders/traders has all the advantages of the contract conditions and gains immorally, unethically and disproportionate benefits at the expense and ruin of the others, is Haram, in any civilised and law abiding society; and it does not have to brand itself “Islamic State”!