How Islam Is Being Confused With Wahhabi Islam: 'The Main Principle for A Muslim Community in A Non-Muslim Country Is That It Must Be Separate and Distinct'

The Goal of Muslim Immigration according To Muhammad’s Teachings

By Israel, Islam and End Times

The concept of Muslim immigration began with Islam’s prophet. Soon after Muhammad arrived to Yathrib (Medina) together with his close friend and father of his wife Aisha, Abu Bakr, they were joined by a ring of other friends and followers, known in Islamic history as “Companions.” They formed in Medina the first body of Muslim immigrants in history and very soon changed the face of Medina, making it the city of the victorious Islam. Immigration transformed Muslims from weak and scattered groups of individuals loyal to their religious leader, into a consolidated army, then a united community and finally, into a socio-religious political state. If Muhammad and his group had never immigrated to Yathrib in 622 AD, there would never have been any Islamic social, economic and political expansion.

Muslims learned and remembered this lesson, and since then the concept of Hijrah- Immigration- as a means of supplanting the native population and reaching the position of power became a well-developed doctrine in Islam. Immigration in Islam is not a Western liberal romance about how the newcomers gratefully search for opportunities for a better life in liberty and offer their talents and loyalty to the benefit of their new homeland. Immigration as Islam sees it is an instrument of Islamic expansionism that employs religious and ethnic separatism in order to gain special status and privilege, then subvert, subdue, and subjugate non-Muslim societies and pave the way for their total Islamisation and implementation of Shari’ah law.

The main principle for a Muslim community in a non-Muslim country is that it must be separate and distinct. Already in the Charter of Medina, Muhammad outlined the basic rule for Muslims who immigrate to non-Muslim land, i.e., they must form a separate body; keeping their own laws and making the host country comply with them:

(3) The Quraysh emigrants according to their present custom shall pay the blood wit within their number and shall redeem their prisoners with the kindness and justice common among believers.

Muslims from the beginning made it clear that they were going to live by their own laws. 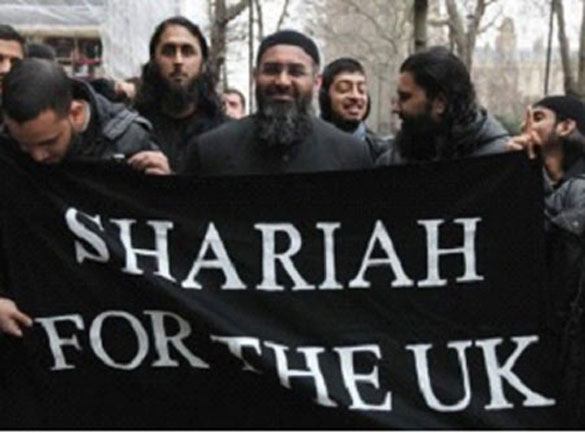 Muhammad’s teachings forbid Muslims to immigrate to a non-Muslim country if they pursue the goal of their own personal gain or pleasure. But if they immigrate with the ultimate goal of spreading Islam and making it victorious, or at least this is a part of the reason for their immigration, then they are allowed both pleasure and personal gain. A Muslim immigrant should not integrate with the host society, but if his stay depends on showing some kind of integration to the host non-Muslim society, then he is permitted to demonstrate a fake integration, only in appearance and only temporarily, until the goal of subduing and the Islamisation of this host society is achieved.

That is why all those discussions so popular among Western liberals about which method is  best for the integration of the religious Muslim immigrants into the host non-Muslim societies are not only futile; they are amusing, like disputes about the best way to make a tiger a vegetarian.

The next rule Muhammad made clear was that immigration for Muslims is a religious duty. The reason is simple and evident: the more Muslims come to a non-Muslim country, the more possibilities this will open for infiltration in all structures of this country with the final goal of securing victory for Islam, and more soldiers will stand up when the time of Jihad comes. Immigration is a preparatory stage to Jihad, and Muhammad made it very clear when he said:

“I charge you with five of what Allah has charged me with: to assemble, to listen, to obey, to immigrate and to wage Jihad for the sake of Allah.”[1]

The religious duty of immigration was stated in numerous Quranic Surahs: 2:218, 8:72,74,75; 9:30,; 16:41; 16:110…They all start with the same words: “Those who believed and immigrated, and strove hard and fought in Allah’s Cause…” Immigration goes as a step stone for Jihad; where you cannot establish Islam by force is where Immigration enters. And in practice, it looks like that: Islam in Egypt, Palestine and Persia was spread by the sword; but many other countries- Indonesia, Malaysia, Central Asia, some parts of India- were gained through “immigration.”

Immigration In Islam Is Merely A Disguised Conquest.

And if someone thinks that this disguised conquest ended, then they are fatally wrong: immigration ends only when Islam achieves its goal of conquering the world, and Muhammad, again, stated this very clearly:

So immigration can end only when a community or a country has been won over, and the conquest has been achieved. But Jihad does not end until all the world is Islamic, and Muslims should not stop until Islam dominates the world.

As Muhammad formulated it, “There can be no Hijrah (migration) after the conquest but Jihad and a desire or an intention, and if you settle then spread out.”

From the start, Muhammad brushed aside the Christian postulate about separation of Church and State: in the Islamic community, Church is State, and State is Church. The most important result of Hijrah was the expansion of Islam outside its initial borders not only as a religion, but as a socio-religious and socio-political system. Muslim immigration is a transitional period of preparation for transforming the host society from an open society into an Islamic society of the “slaves of Allah” and of establishing a political system, a State, based on Islamic principles.