The Quranic Concept Of War And Peace: Has Modern Warfare Any Place?

If Verse 5:32 Were Implemented, It Could Save the World from Destructive Warfare and Nuclear Madness

1.    One of the reasons for widespread Islamophobia all over the world is the wrong understanding of the Qur’an.

2.    Islam taught the ancient nomadic Arab tribes the ethics of war and the sanctity of innocent human life.

4.    Battlefield atrocities and inhuman war practices were also a part of the Arab culture before the advent of Islam. 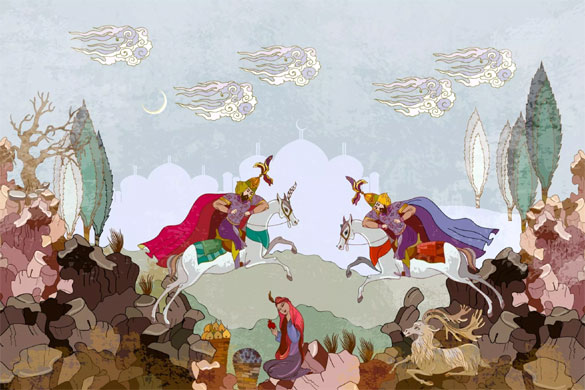 One of the reasons for widespread Islamophobia all over the world is the wrong understanding of the Qur’an, the Holy Book of Islam. There is a misconception that the Qur’an contains references to war and violence inciting Muslims to take up arms against non-Muslims. Ironically, a majority of people who criticize the Qur’an are those who did not read it till the last page. They misguide the ignorant by quoting cherry-picked verses from the Qur’an in order to incite Islamophobic feelings.

Still, it’s worth asking: why does the Qur’an contain references to battles and battlefield? The answer is simple. War has been a part of human civilization since the dawn of humanity. The history of pre-Islamic Arabia also reflects the same reality. It is a well-known fact that the ancient Arab tribal system lacked any central government or political institutions. As the result, warfare was considered to be the only institution for settling scores. [1] The enmity between tribes over trivial issues used to exist for decades resulting in seemingly endless wars. Battlefield atrocities and inhuman war practices were also a part of the Arab culture before the advent of Islam. It is not an exaggeration to say that fighting was a kind of sport for the Arab tribes.[2]  Keeping in view the moral degeneration of the war maniac Arabs fourteen hundred years ago, many verses in the Qur’an proposing conflict prevention strategies, ethics for a defensive battle, and guidelines for humanitarian intervention were no less than a revolutionary message.

A deep study of the Qur’an reveals that verses 4:140 and 6:68 relate to conflict prevention in the case of a blasphemous encounter. Verse 140 of Surah Nisa states, “When you hear the Revelations of God being rejected and mocked, no longer sit with them until they engage in some other talk” (4:140). The same theme is discussed in Surah Anam verse 68, “When you meet such as indulge in (blasphemous) talk about Our Revelations, turn away from them until they enter into some other discourse” (6:68).

By commanding the Muslims to stay away, the Qur’an suggests a pragmatic strategy for diffusing the provoking situation in order to prevent possible anger and aggression. However, a general message from the above verses is to control one’s negative emotions and make all efforts to prevent a possible conflict. It is true that the Qur’an sanctions fighting in self-defence, but only as the last resort to survival.

It’s unfair to analyse the battle-related Qur’anic verses without knowing the context of those verses. In the early years of Islam, Prophet Muhammad (peace be on him), his family, and followers had faced deadly opposition from the pagans of Mecca, who prohibited Muslims from practicing their religion. The non-Muslim chieftains tortured the new Muslims beyond the limits of human endurance. They were brutally beaten, dragged with ropes around the neck, and forced to lie down on burning sand in the very hot desert climate. The pagans left no stone unturned to harass the Prophet Muhammad (peace be upon him) by using torturous and teasing methods. [3] At one point, they hatched an unsuccessful conspiracy to murder him. They also imposed a brutal social and economic boycott on the Prophet and his followers, who were forced to eat tree leaves for months. The cries of the hungry children and suckling babies could not move the heart of the pagans. [4] The prophet and his companions non-violently bore all the hardships for 12 years and did not retaliate. To avoid the devastating persecution, the Muslims migrated first to Abyssinia and then finally to Medina.  However, the pagans of Mecca kept chasing the Muslims and put all their efforts into destroying them in Medina.

Consequently, the Muslims were left with no other option than to perish or to fight back. In this context, the permission to fight back in self-defence was granted in the Qur’an and the battle-related verses were revealed. [5]

In Islam, fighting is allowed in a few circumstances such as in self-defence (Qur’an, 2:190-191, 22:39), in case of violation of peace agreements by an opponent (9:13), or to protect the weak and vulnerable people from persecution (4:75). It is inevitable to know that the Qur’an’s idea of war and peace hinges upon the ideal of social justice. Hence, peace and justice are inseparable in the Qur’an. Leaving a persecuted population at the mercy of the aggressors is against the concept of social justice the Qur’an propagates. How can peace prevail if a large number of people are ill-treated or tormented? Hence, the Qur’an does not support leaving the helpless at the mercy of oppressors, which is explicit in Surah Nisa:

The above verse, in fact, highlights the circumstances when humanitarian intervention becomes a moral obligation. Furthermore, the phrase ‘fight in the cause of God’ should not be mistaken as fighting to promote Islam; the ‘cause of God’ indicated in the verse (4:75) is to protect the weak and vulnerable.

The fact of the matter is that the Qur’an does not differentiate between Muslims and non-Muslims as far as justice is concerned. It says “If two parties of believers fall to fighting, make peace between them (and act promptly). But if one of them aggressively encroaches the rights of the other, then fight you all against the aggressive side until they comply with God's decree (concerning the matter). If they comply, then make peace between them with justice and be scrupulously equitable. Surely God loves the scrupulously equitable” (49:9).

Another crucial matter is that, in Islam, only a state has the right to fight and non-state actors cannot lead such expeditions. [7] Furthermore, peace must be given preference and sought at every step. So, the Qur’an prohibits continuing the battle if the opponent is inclined to peace:

“Then if they desist (from fighting), surely God is All-Forgiving, All-Compassionate” (2:192).

“If they desist, then there is no hostility except to the wrongdoers” (2:193).

In Islam, seeking peace is more important than winning a war. As for a battle, the Qur’an clearly states that all non-combatants need to be treated kindly and justly. It is clearly stated: “God does not forbid you, as regards those who do not make war against you on account of your Religion, nor drive you away from your homes, to be kindly to them, and act towards them with equity. God surely loves the scrupulously equitable” (60:8).

It is clear that Islam does not approve of war for selfish motives, worldly gains, and satisfaction of the ego. Verse 190 of Surah Baqarah “fight those who fight you” clearly highlights two important points; the first is that fighting is only allowed in self-defence or against persecution; and second, war can only be waged against the enemy combatants. The non-belligerent, civilians, and non-combatants belonging to the enemy group cannot be harmed as it goes against the Qur’anic and Islamic conception of justice. Islam warns its believers that “by no means let your detestation for a people (or their detestation for you) move you to (commit the sin of) deviating from justice” (5:8). Furthermore, verse 5:32 describes the sanctity of an innocent human life leaving no room for terrorism, genocide, massacre or any destructive activities which cause harm to the civilian population. According to the verse, “He who kills a soul unless it be (in legal punishment) for murder or for causing disorder and corruption on the earth will be as if he had killed all humankind; and he who saves a life will be as if he had saved the lives of all humankind” (5:32).

In Islam, nothing can legitimize the killing of civilians, regardless of the community or religion they belong to. From an Islamic perspective, everything is not fair in war but there are some strict rules for battle – one of them is to protect the innocent. Fourteen centuries ago, the wars were fought with swords, and the Muslims under Prophet Muhammad (peace be on him) not only ensured the safety of non-combatants but also took special care to protect the environment from the hazards of war. Unfortunately, this seems impossible in modern warfare. Since the invention of gunpowder, wars have resulted in the indiscriminate killings of combatants and non-combatants. As the military industries grew and produced advanced weapons – like nuclear bombs, missiles and drones – civilian deaths increased to unprecedented levels. It is almost impossible to ensure the safety of the civilian population, which is one of the integral Islamic ethics of war. Hence, it goes without saying that modern warfare has no place in Islam, which is implicit in the Qur’an (2:190, 5:32 and 60:8).

To recapitulate, Islam taught the ancient nomadic Arab tribes the ethics of war and the sanctity of innocent human life. If verse 5:32 were implemented, it could save the world from destructive warfare and nuclear madness. Unfortunately, Muslims and non-Muslims alike are deaf to the Qur’an.

"Dr. Nazia Nazar is based in Finland. She holds an MS in Peace, Mediation, and Conflict Research and a PhD in Developmental Psychology from Åbo Akademi University, Finland. She has written extensively about Islam, peace, interfaith harmony, and minority rights."