1.    Islam has permitted men to have four wives.

2.    However, four marriages are conditional. 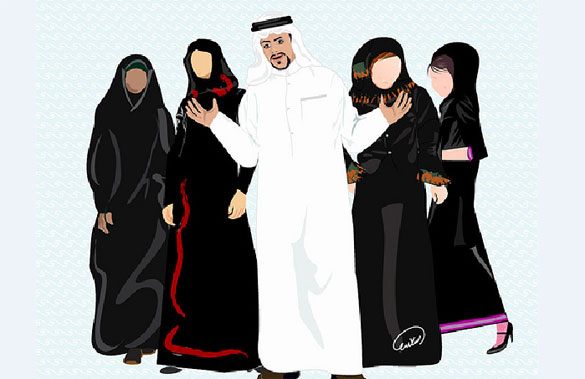 The Grand Mufti of Al Azhar University of Egypt has stirred a debate on polygyny (having more than one wife) among Muslims. Recently replying to the query of a viewer on a TV programme Dr Al Taiyab said that keeping one wife was in accordance with the principle of the Quran and it was better for the family and children. The viewer had asked him whether a man can marry a second woman without informing his first wife while staying in a foreign country. Dr Al Taiyab replied that the husband is not obliged to inform his first wife of his second marriage but keeping one wife was better. He referred to the verses of the Quran where the Quran has permitted men to have four wives but has also linked it with justice and equality with all the wives. He said thay polygyny causes injustice to the children in many cases.

Dr Al Taiyab's statement has come as a surprise to many Muslims who have been made to believe that Islam promotes and encourages polygyny. This is because the pre-Islam. Arab society was a polygamous society. Men had more than four wives and women also had sexual relationship with more than one man. Islam brought an end to this waywardness. Since the Arab society was largely polygynist, Islam limited the number of wives to four as taking a radical step of limited the number of wives to one would cause problems in society. Islam follows he principle of gradual change. Slavery was discouraged and slaves were gradually rehabilitated in the mainstream of the society.

When the critics of Islam criticise Islam for allowing four wives, they do not take this historical or cultural truth into consideration. The fact that the Quran has discouraged polygyny in the same way it discouraged slavery. It has made justice and equality with all the four wives a pre-condition for polygyny.

Even the general Muslims have his wrong notion that Islam encourages to have four wives. They are unaware of the Quran's position that doing justice to all the wives is next to impossible and so the men should keep only one wife. There are to verses in the Quran that deal with polygyny.

In this verse the holy Quran permits four wives but the stress is on justice. And so the Quran says that keeping on wife will save the man from doing justice.

In the next verse in the same surah Al Nisa, the Quran again stresses on equality and justice among his wives.

"And whatever effort you make you wont be able to maintain equality among them, so do not incline towards one and leave the other in uncertainty as if hanging in the air. And if you make amends and observe piety hen God is all forgiving and Kind and if they part ways then God will bless them."(Al Nisa: 129-130)

The two verses clearly say that men can marry four women provided they can maintain equality among them and do justice to them. In the second verse the Quran says that man cannot do justice to all and so he should restrict himself ro one marriage.

The Quran keeps human psychology in mind. Every man and woman has distinct virtues and flaws. If a man marries four women, all the four women won’t be equally beautiful. One of them will be more educated and more sophisticated while the other may be less mannered. One even may have some physical flaws. So in this case, treating all wives equally in all matters will not be possible for the husband.

Now the question is why the Quran permits four wives when it knows that the man cannot do justice to all of them. The Quran has permitted multiple marriages for exceptional circumstances. If the first wife is not able to conceive for different reasons or gives birth only to girls. The man has the option to marry a second time or third time. We see in monogynous societies where second marriage is not permitted, the wife is tortured or killed for giving birth to only girls. In England a king had to kill his queen because she did not give birth to a son as his heir. He badly needed a second wife to get an heir. In Christianity, only one wife is permitted and the husband cannot have second wife during the life of the first wife.

Islam has kept the door open for such exceptional circumstances. For those who want to have four wives without any compulsion, the Quran has put the precondition of justice and equality.

So when Dr Mohammad al Taiyab said that only wife is sufficient, he actually stressed in the same Quranic principle of justice and equality.

He also noted the social implications of multiple marriages. The children bear the brunt of the bitterness in relations between the husband and wife. More often rhe man marries a second time to divorce the first wife. There cannot be a strong emotional bonding between the couple when the husband thinks that he can marry again and bring another woman and the woman has the constant fear that her husband can marry another woman without informing him. The trust is lacking in such relationship.

The Arab society has been a polygynist society for many centuries and their mentality has not changed with time. That's why when Dr Al Taiyab reminded them of the Quranic position on polygyny, they protested.

The modern world has a different approach to marriage. Marriages are seen even by the Muslims as a permanent union between a man and a woman with social obligations and duties towards the children. To them, the family is a social unit of which the husband, the wife and the children are inseparable parts. Marriage for them is not merely a biological and sexual union for physical gratification. Dr Al Taiyab's views only reflected the advance of the global Muslim society from polygyny to monogamy.