The Birmingham Mushaf between Simple Facts and Manufactured Controversies

Two months ago came the exciting discovery of fragments of a Qur’anic manuscript that radiocarbon dating has shown to be among the earliest, if not the earliest, in existence. The manuscript was found in the Mingana Collection Middle Eastern manuscripts, which are held by the University of Birmingham, United Kingdom, which is why it is often referred to as the “Birmingham Qur’an.” It is common practice to name old manuscripts of the Qur’an after the places where they were found. However, it is more accurate to call any manuscript of the Qur’an “Mushaf” rather than “Qur’an,” because the word “Qur’an” refers to the revelation whereas “Mushaf” denotes the compiled, written record of the Qur’anic revelation. I have previously published an article about the distinction between “Qur’an” and “Mushaf.” This is why I will call the newly found manuscript the “Birmingham Mushaf” rather than “Birmingham Qur’an.”

The fragments consist of two leaves that are made of animal skin, 33.3 cm by 24.5 cm in dimension. The verses of the Qur’an are written in clear Hijazi script. The text has skeletal dots that differentiate consonants. Skeletal dots were used well before the time of the Qur’an, as they are found in a number of ancient Arabic writings that predate Islam. The text of the two folios does not have diacritical marks for the short vowels. These marks are believed to have been introduced by Abū al-Aswad al-Du’alī (d. 69 H / 688 CE), a grammarian and close companion of the fourth caliph Imam ʿAlī bin Abī Ṭālib (40 H / 661 CE).

The folios are double-sided, making up four pages in total. They were almost certainly part of a complete Mushaf. The front page of the first leaf covers verses 17-22 from Chapter 18, “al-Kahf.” The back page of this leaf continues from verse 23 to verse 31.

There is more than one reason for considering these fragments to be extremely significant and for the incredible excitement they generated among both laypeople and scholars:

Radiocarbon dating has dated the parchment to the period 568-645 CE with 95.4% accuracy. The writing on the parchment is likely to have been made immediately or shortly after the death of the animal it was taken from. One has to talk about a combination of range and accuracy level when using this technique, but the range suggests that the Mushaf to which the two leaves belong was probably written shortly after the departure of the Prophet (Sallā Allah ‘Alaihi wa Sallām) or maybe even late in his life.

2) An equally significant fact is that the text on the two leaves is identical to the text of the Mushaf we have today. The text of each verse in the Mushaf that Muslims have today and the manuscript match word for word. Even the order of the verses in both is exactly the same. Furthermore, the front page of the second folio shows that the order of the chapters is also the same, with the Chapter of Ṭāhā following that of Mariam. In other words, the manuscript confirms that the Qur’anic text has been perfectly preserved and has reached us without being changed. 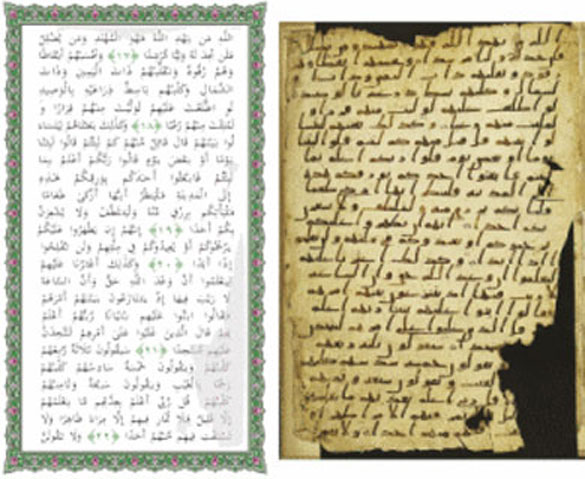 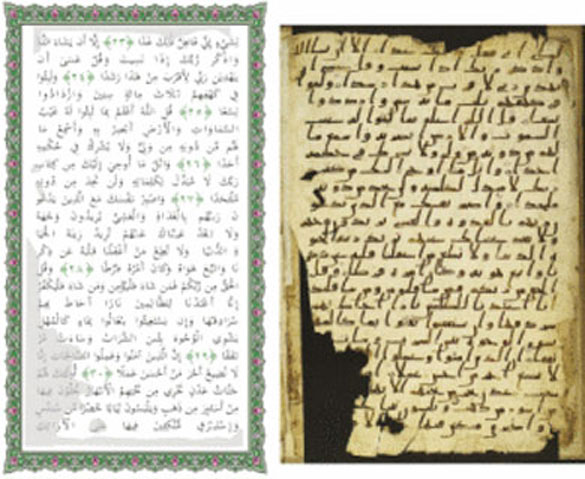 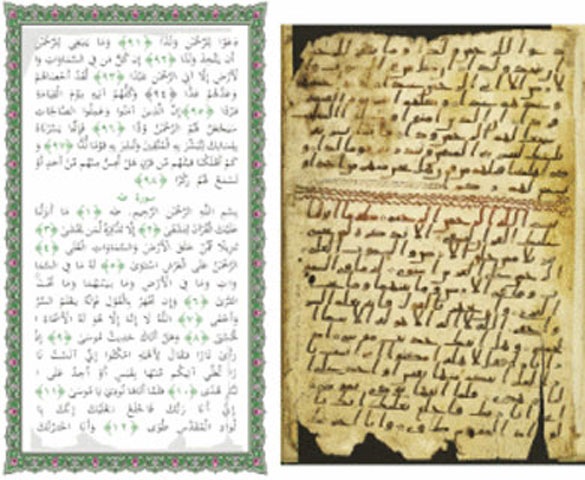 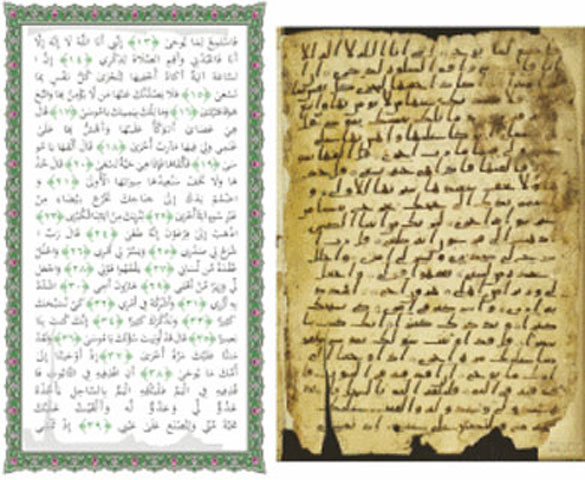 These are the simple facts about the Birmingham Mushaf. They are in line with the traditional account in the Islamic primary sources about the preservation of the Qur’anic revelation, including these statements in the Qur’an itself:

Verily, it is We who revealed the Remembrance [the Qur’an], and verily, We are its Guardian. (15.9)

Surely those who disbelieved in the Remembrance [the Qur’an] when it came to them [were wrong]; surely it is an impregnable Book. (41.41) Falsehood cannot come to it from anywhere; [it is] a revelation from One who is Wise and Praised. (41.42)

But the discovery of the Birmingham Mushaf has also revealed uncompromising and almost irrational objection to the concept of the preservation of the Qur’an. Some have tried to turn the significance of this stunning discovery on its head, claiming that it questions rather than supports the preservation of the Qur’anic text! The piece of information that has been used to serve this purpose is the date range that the radiocarbon examination has assigned to the parchment. As the earlier part of this range goes back even before the birth of the Prophet Muhammad (Sallā Allah ‘Alaihi wa Sallām), it has been suggested that the Birmingham Mushaf may predate its Prophet! In other words, the claim is that the Prophet (Sallā Allah ‘Alaihi wa Sallām) simply copied and used texts that were already in circulation.

All of the instances in which this claim was made that I have come across carefully fail to mention a critical fact. The Qur’an was revealed over 20 years or so, yet the range suggested by the radiocarbon dating for around 95% accuracy is as wide as 78 years, because of limitations of the technique and the nature of parchment. This means that it is mathematically impossible for any text from the time of the Prophet or shortly after him to avoid the suggestion that it existed before him. Even if the radiocarbon dating range, whether for this or another manuscript, was narrower, it would still be more than 20 years, and those who would like to advance this claim would continue to do so.

This claim is made in a clearly misleading way. Those claimants express their view in a way that suggests that the claim is the “result” of the newly found manuscript. This is completely untrue and misleading. This claim can be made regardless of the details and facts of any manuscript, because radiocarbon dating would probably always yield a date range that is bigger than the 20 years over which the revelation of the Qur’an took place. In other words, the Birmingham Mushaf is being presented as the reason for a claim that actually has nothing to do with that manuscript. This claim is nothing other than a belief that is held independently of the Birmingham Mushaf, which this manuscript does not support in any way.

While the discovery of the Birmingham Mushaf has been misrepresented as potentially indicating that the Qur’anic text had existed even before the Prophet (Sallā Allah ‘Alaihi wa Sallām) was born, the more popular, though no less absurd, claim against the preservation of the Qur’an has so far been that it continued to be developed many decades after the Prophet died! This bizarre claim has been embraced only by a minority of scholars, not least because there is not a shred of evidence to support it and there is plenty of evidence, including old manuscripts, that refutes it. So this older, baseless claim has now been joined by the exact opposite claim that the Qur’an existed before the Prophet Muhammad (Sallā Allah ‘Alaihi wa Sallām) was born! They both share the same objective, however, of discrediting the Qur’an and the Prophet Muhammad.

Interestingly, the Qur’an itself documents in several verses the different accusations that were levelled at the Prophet Muhammad in his lifetime. Some of these charges, which probably mainly came from polytheistic Arabs, accused Muhammad of basing the Qur’an on confused dreams; making it up; and being merely a poet, a madman, or a soothsayer:

And they (the disbelievers) say: “O you [Muhammad] to whom the Remembrance (the Qur’an) has been revealed, you are a madman!” (15.6)

Therefore continue [O Muhammad!] to remind; for by the grace of your Lord, you are not a soothsayer or a madman. (52.29)

Another charge was that the Qur’an was a collection of ancient stories that was being taught to, and written down for, the Prophet Muhammad by some people:

And they [the disbelievers] say: “[The Qur’an is] stories of the ancients that he [Muhammad] has had written down, as they are read out to him morning and evening.” (25.5)

Time has not changed much! The Birmingham Mushaf proves yet again that there is nothing that will convince someone who has already decided against accepting the preservation of the Qur’anic text: