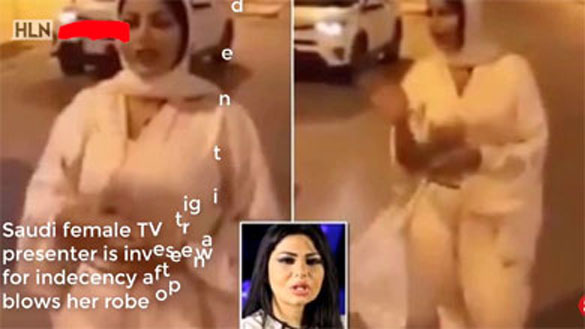 The 1954 photo showing American actress Marilyn Monroe posing over an updraft of a New York subway grating has become an iconic image of 1950s America. The gust that sent her white-ivory cocktail dress flapping revealed her high heels and now famous legs. That a major movie star also let her billowing dress reveal her pair of white underwear was nothing short of shocking for the time.

Another “transgressive” moment has recently occurred in Saudi Arabia where a female journalist unintentionally revealed too much earlier this week. Shireen al-Rifaie, a Saudi national who works for UAE-based Al Aan TV, appeared in a video while doing a story on the kingdom’s decision to lift its decades-long ban on female drivers.

While walking along a Riyadh street at night-time her white Abayah—a simple, loose-fitting robe worn by Muslim women—was blown open by the wind, revealing her white trousers and undergarment. Al-Rifaie also wore a loose-fitting headscarf that only half-covered her dark hair.

The widely viewed video quickly sparked outrage among the country’s ultra-conservatives. The Arabic hashtag “naked woman driving in Riyadh” began to circulate on social media. Others responded to it with light-hearted comments, mocking hardliners for describing a fully dressed woman as “naked.”

Al-Rifaie denied the charge, telling the Saudi news website Ajel that she wore “decent clothes.” The website reported that the journalist fled the kingdom for the UAE shortly after the controversy erupted.

Meanwhile, the kingdom’s General Authority for Audiovisual Media on Tuesday launched an investigation into the incident, accusing al-Rifaie of “violating regulations and instructions” by “wearing indecent clothing.” The probe will reportedly proceed even though the journalist is no longer in the kingdom.

Saudi Arabia’s dress laws become murkier since Crown Prince Mohammed bin Salman declared in March that women need only to dress modestly and not necessarily wear the abaya. “The laws are very clear and stipulated in the laws of Sharia [Islamic law]: that women wear decent, respectful clothing, like men,” bin Salman said during an interview with CBS television.

He added, “This, however, does not particularly specify a black abaya (Muslim body-length dress) or a black head cover. The decision is entirely left for women to decide what type of decent and respectful attire she chooses to wear.”

But bin Salman’s pronouncement flies in the face of a female dress code that had been for decades strictly enforced by law. Adhering to a literalist strain of Sunni Islam known as Wahhabism, Saudi authorities required all women in the country—foreign and local—to wear abayas in public. They required Muslim women to cover their hair with a hijab or a headscarf. And though the state did not require Saudi women to cover up almost completely with a burqa, many chose to do so anyway.

Given the ambiguities between long-time expectations and bin Salman’s recent pronouncements, observers are now wondering if al-Rifaie was out of line.

Laila Hamarah, the head of the programs at the Arab Women’s Organization of Jordan, told The Media Line that many women in the Arab world are happy that the Saudi government has finally granted women the right to drive, but questions remain about who should be credited with the victory.

Not wanting to delve into the specifics of Al-Rifaie’s case, Hamarah added that over two dozen women activists are still behind bars in the kingdom.  “The Saudi government is trying to take credit for allowing women to drive while isolating these and other activists.

“The Saudi government should release the prisoners, and I call on women activists around the world to pressure the government to do so. We can’t celebrate the achievement of allowing Saudi women the right to drive if the activists who worked hard on the issue are still in prison.”

A social and political analyst in Saudi Arabia who spoke on the condition of anonymity told The Media Line that Al-Rifaie exposed herself in an indecent manner. “Saudi Arabia is a conservative country and Al-Rifaie can’t do something that is blatantly against the system.”

The analyst explained that the journalist should have been aware of the wind and its potential to blow open lose-fitting clothing, revealing areas of her body that must normally be covered. Furthermore, the “indecent” aspects of the clip could have been edited out before it was released online.

“She certainly tried to excite instincts. The new reforms in Saudi Arabia do not women can now play with Saudi society’s morals and values. There is no place for provocative clothing or attitudes in the kingdom.”