The most striking thing about interviewing Rula Ghani, the first lady of Afghanistan, may be that the interview is taking place at all. 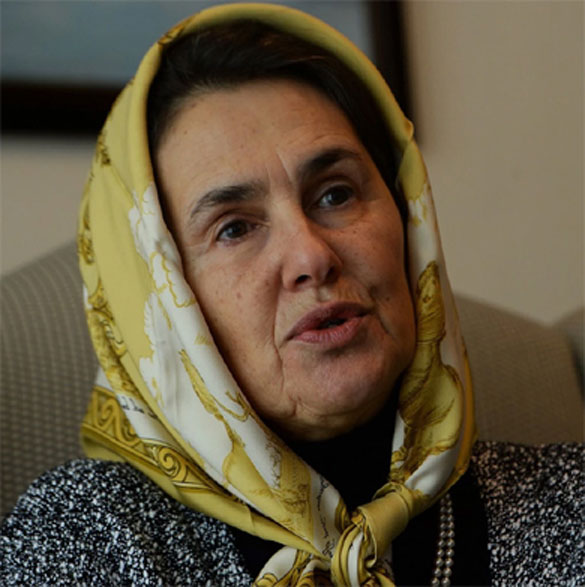 Ghani, whose husband, Ashraf Ghani, became president last year, is a natural-born diplomat, careful to note the distinction between her situation (two grown children) and that of her younger predecessor. “We are in different phases of our lives,” said Rula Ghani, 66.

Zeenat Karzai herself once acknowledged the societal constraints against taking an active role as first lady. “He [Hamid Karzai] and I both know our country’s culture, traditions and the current state of affairs,” she explained in a rare 2013 BBC interview. “We need to take this into account.”

Ghani, raised in a Lebanese Maronite Christian family and educated in France, the United States and Lebanon (she and her husband met as students at the American University of Beirut), has adopted a decidedly different route. It began during the presidential race, when she campaigned alongside her husband, just once, on International Women’s Day.

“I told him, it’s kind of strange, here you’re going to be talking about women’s rights. . . . I think I should be there with you,” she recalled in an interview at the Afghan embassy in Washington. She not only appeared, but, at her husband’s suggestion, spoke, briefly, about women’s ability to use the skills developed in the household — educating, managing and peace-keeping — in a public capacity.

“For me it was really a  no-brainer, and I was surprised by the reaction that people thought it was such a huge step,” Ghani told me.

She made news, again, during the inauguration, when her husband lavished praise on “my partner” for her work on behalf of Afghan women.

When they returned to Afghanistan in 2002 (Ashraf Ghani had been working here, for the World Bank) and her husband served as finance minister, she worked with an organization, Aschiana, that helps feed and educate street children. Bored out of her wits in the presidential palace, she decided to open her own office “to try and forge a role for myself,” advocating not only for women and girls but other vulnerable populations. She now has a staff of six.

This month found her on a solo two-week visit to the United States, with speeches at the Center for Strategic and International Studies and Georgetown University, appearances on NPR’s “The Diane Rehm Show” and “Morning Edition,” and visits with her American-born children (Mariam, a Brooklyn-based artist; and Tarek, a doctoral candidate in business at Berkeley).

In a Western democracy, the job of first lady is at once anachronistic and fraught — its occupant caught between competing conceptions of women’s roles. Multiply those tensions a thousand-fold in a developing, Muslim country such as Afghanistan, which simultaneously has quotas designed to ensure women’s representation in government and appalling practical restrictions on the ability of women and girls to obtain educations and live freely.

Ghani deftly threads the cultural needle, serving as a soft-spoken force for change while refraining from pushing too hard against societal norms. Thus, Ghani is happy to wear a headscarf when in Afghanistan but goes uncovered in the West.

“I’m now first lady and so I’m no longer myself, I have a responsibility to the rest of the women, and so if that’s the culture of the moment, I will abide by it,” Ghani said.

Similarly, she speaks not of feminism but of the family. “If I were a feminist, I would be talking about women’s rights left and right and annoying men and pushing their buttons,” Ghani said. “I have a very mild approach to things. It doesn’t mean that my commitments are not strong.”

To speak with Ghani is, also, inevitably to worry about the tenuous future facing girls and women in Afghanistan, as the U.S. presence recedes and her husband’s government weighs peace talks with the Taliban.

“We need to find solutions that include them,” Ghani said of the Taliban. “Certainly women’s rights will be a very important issue, and I don’t think that my husband will stand for any regression on that account, but this is their country, too.”

In the interim, she argues, women’s gains in education and the workplace need to be entrenched. “The women of today will not kneel in front of the Taliban,” she said. “But we can make [women] even stronger and then the question will be moot — totally moot.”

Ruth Marcus is a columnist and editorial writer for the Post, specializing in American politics and domestic policy