Dr. Sumayaa – A Principal with a Difference 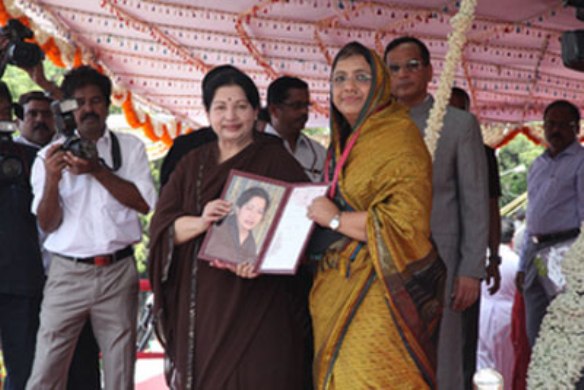 It gives us a great pleasure to know that Dr. Sumayaa, the Principal of the Kilakarai based Thassim Beevi Abdul Kader College for Women (Autonomous) was honoured with “THE BEST SOCIAL WORKER AWARD FOR WOMEN’S WELFARE” in recognition of her continuous yeoman service towards the welfare and well being of women by the government of Tamil Nadu. She received the award from the honourable Chief Minister of Tamil Nadu Dr. J. Jayalalithaa on 15th August 2012 in the 66th Independence Day Celebrations at Fort St. George, Chennai.

Dr. Sumayaa has not only been administrating the college very efficiently as a Principal for the past 25 years but has also involved herself in social welfare activities as a Programme Officer of the Seethakathi NGO. It is learnt that she collected a sum of Rs.18, 41,000 as donation in Ramanathapuram district and distributed scholarships and financial assistance to 840 women through the Muslim Women Aid Society there.

Besides all this, she also created awareness among men about drunkenness and its consequences through the self help groups as a result of which many broken families were reunited. She also initiated Vocational training such as Entrepreneurship Training and Training for the production of Marine Organisms to enable the members of SHG to generate income.

She has also been creating awareness among the people through self help groups about important issues such as Family Planning, Eye Donation, Blood Donation and AIDS. She also has the credit of monitoring the Emergency Tsunami Reconstruction Project (ETRP) and Rajiv Gandhi Rehabilitation Project (RGRP) programme in Ramnad district for some time. She has also served in the National Commission for Minority Educational Institutions, New Delhi and contributed significantly all over India by being its Committee Member on Girls’ Education during the years 2007-2009 and 2010-2013.

Dr. Sumayaa is an inspiration to the Muslim community. Allah loves those who love His creations.