Viewpoint: Why a Burka Ban Defends the Rights of Women

Both multiculturalism and the burka need to be taken away from the cultural reciprocity footing.

It was sad, yesterday, to see Nigel Farage of UKIP considering ditching his party’s policy of the burka ban. Contrary to mass popular belief there is nothing intolerant or illiberal about this policy.

Let me explain. It is a common, flawed assumption that it is intolerant not to tolerate other, alien, cultures on the British Isles. There is a missing part to this, of what would otherwise be, erroneous equation.

The other part can be posed in a question: How can it be tolerant of immigrants and other non-indigenous cultures not to give up their own cultures and assimilate once on the territory of the British Isles?

If you are on another’s soil (to put it bluntly) it would be intolerant, anti-cultural or anti-national, not to behave according to the norms and customs of that country. As the old saying goes ‘when in Rome, do as the Romans do’.

So why are there women in Britain currently demonstrating intolerance towards British culture and the peoples of the British Isles by wearing Burkas?

Contrary to widely held belief, there is no theological justification for the Burqa (or Hijab, or Chador) whatsoever in Islam.

At best there are sayings from the Islamic Prophet that insist that both sexes dress 'with modesty'. 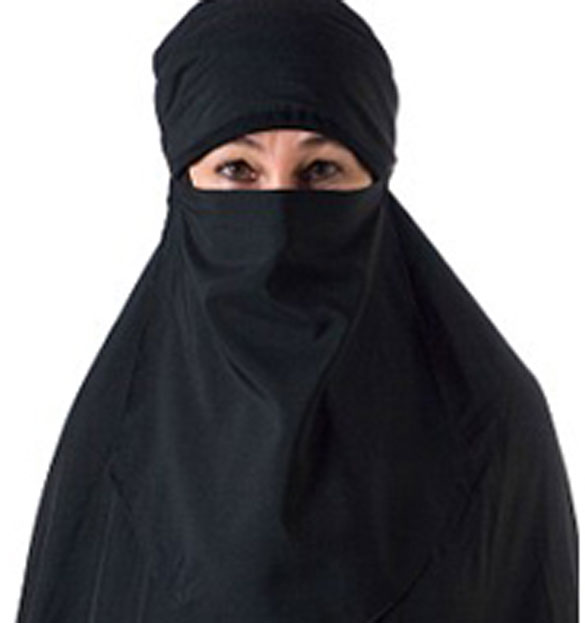 For example, women who choose to make the Islamic pilgrimage (Hajj) are pointedly forbidden to conceal their faces. The contention that facial concealment is a religious requirement in Islam is thus: a straightforward lie.

But it is a lie very deftly employed.

It is one which taps into a natural British reticence from interfering with the requirements of faith of other people, and the extraordinarily generous British default of respecting the beliefs of others, even if those others have no intention, sadly and despicably, whatsoever of reciprocating that respect.

Why are there women in Britain currently demonstrating intolerance towards British culture and the peoples of the British Isles by wearing burkas?

The erroneous and commonly held belief is that burkas (and all 'Islamic' female face veils) are ubiquitous cultural practices in the Muslim world that should thus command our consideration.

Further that we should, out of some morally misguided empathy, recognise that they largely originate from societies unfamiliar with female emancipation that consequently should, at least, deserve our understanding.

The easily verifiable truth however is quite to the contrary.

Largely relegated for most of the previous centuries to rural backwaters, and isolated (Wahhabist) parts of the Arabian peninsula, the ubiquity of veils (and more total face coverings like niqabs and burqas) in certain communities is in fact a, bizarrely, uniquely 20th century phenomenon; and for most of the Muslim world a late 20th century one at that.

The natural predilection of Britons is to have respect for the religious beliefs of other people. But these coverings having precious little to do with piety, and everything to do with politics.

It is important to note that what is often religious in the Islamic sense, is often political in British culture and discourse. To understand and dismantle the myths surrounding the burka we should not throw-away our capacity, post Enlightenment, to draw such subtle distinctions.

Far from being a relic of pre-female-emancipation societies, Burkas are largely indicative of an enormous and deliberate political retrograde step, purposefully aimed at de-emancipating women who were gradually being liberated away from the status of chattel. These women often are liberated through exposure to the West.

The photographic evidence for this is both overwhelming and unsettling.

View a matriculation photo from Cairo University in the 1950s (linked here) and you’ll see a picture not unlike one you might see in the UK today. With veils appearing barely once or twice. Continue viewing these pictures year in year out and the smiling and emancipated women gradually disappear from view to the point where today those not veiled in some way are the exception.

What then has been the force normalising what has been, in the case of full facial covers like Niqab, a historical anachronism for a millennium?

The answer is the Muslim Brotherhood, the very political movement that now seems poised to channel the impetus of the Arab Spring, across North Africa, inexorably in the direction of theocracy.

Indeed through much of the Islamic world the veil and its most dramatic variant, the Burqa, are considered, “The mark of The Brotherhood.” A poignant and significant indicator that their specific political agenda predominates within a geographic locality.

Further, on an objective detached analysis, is it important to ask: What, exactly, is exemplified in the meaning of this garment when it is utilised as a form of identity concealment?

In the woman who truly voluntarily wears a burka, in a country like the UK for example: it is either a deliberate, or inadvertent, “Up Yours!” to the inherent society that, the wearer knows full well, has always considered the voluntary revelation of facial identity to be a key component of safety, cohesion, and peace of mind in a cooperative democracy.

Either way it is intolerant of the inherent culture of the territory one finds oneself in. Thus the wearing of the burka is, without a doubt, an act of intolerance to British culture.

The wearing of the burka is, without a doubt, an act of intolerance to British culture

That so-called 'Libertarians' often choose to endorse the laissez-faire view towards the burka by erroneously attacking those who are proponents of a ban on the burka as intolerant.

In fact those who often seek the banning of the burka, like UKIP’s Lord Pearson, are fighting to keep the status quo of mutual respect between the extraordinary British tolerance of foreign cultures that stems from education and post-Enlightenment politics to those who refuse to assimilate in the new country they have found themselves in.

Never has toleration been so one-sided. Though it may be erroneously viewed as tolerating the intolerant, it smacks of a want of natural justice. For what society, nation or culture- let alone a host to a party, would want to put up with such naked intolerance of its guest?

Accepting the burka is not a sign, as pseudo-liberals believe, of tolerating a choice of clothing, but rather of tolerating grave offence. That alone may make a moral case for censuring it, if one is willing to use the law to proscribe the gravely offensive. However there is another factor that may turn the case towards legal proscription and censure.

This is the argument for the burka from the point of view that it protects women from insatiable licentious men. This is a deeply flawed argument. It corroborates, rather than detracts, from the mistreatment of women in a culture where honour killings and force marriages are disproportionately prevalent.

The onus becomes switched entirely away from a societal requirement that men control their urges, to a familial one in which, to escape male attention, women must bear the burden of eradicating every trace of their femininity.

Consequently, there is a dark and unpalatable truth here that the architects of multiculturalism cannot be permitted to ignore: societies which misguidedly choose to normalise the burka may, consequently, normalize the intentional sexual targetting of females who do not wear it, in those societies where it is commonplace.

The mental self-justification of the Pakistani rape gangs of (white) women of the North of England are the flip side of a society whose moral cowardice simply refuses to confront the statement on gender identity that the burka makes.

It ought, finally, to be re-iterated that the burka has nothing whatsoever to do with freedom of religion.

The burka is in no way a religious obligation that thus demands our consideration and respect. On the contrary it is a deliberate political statement whose meanings any free democratic society, least of all one that pretends to believe in women’s freedom, should consistently and unapologetically challenge.

That the onetime UKIP leader Lord Pearson had the courage to recognise the political necessity of confronting this political issue, was a break from the normal political apathy towards protecting our culture.

That Nigel Farage is considering abandoning this commitment ought to force us to ask whether there is any courage left amongst our politicians to fight for our cultural heritage and gender equality.

Contrary to the conclusions of his reappraisal, the burka ban is important so that our social fabric is built not on one-sided, but mutual toleration between new guest peoples and their extraordinary hosts.