I came across a book titled “Munthakhab Masaail” – part I which contains 160 pages and is authored by Mr. Mufti Mohammed Salahuddin Qasimi with the assistance of Mr. Mufti Mohammed Misbahullah Qasimi and published by Majlis-e-Jamiul Khair. It is a Special Issue of “Al-Khair” – a monthly Urdu magazine by this organization. It has re-produced a fatwa from “Fatawa Rahimiya” which is given hereunder along with a brief English rendition of the same: 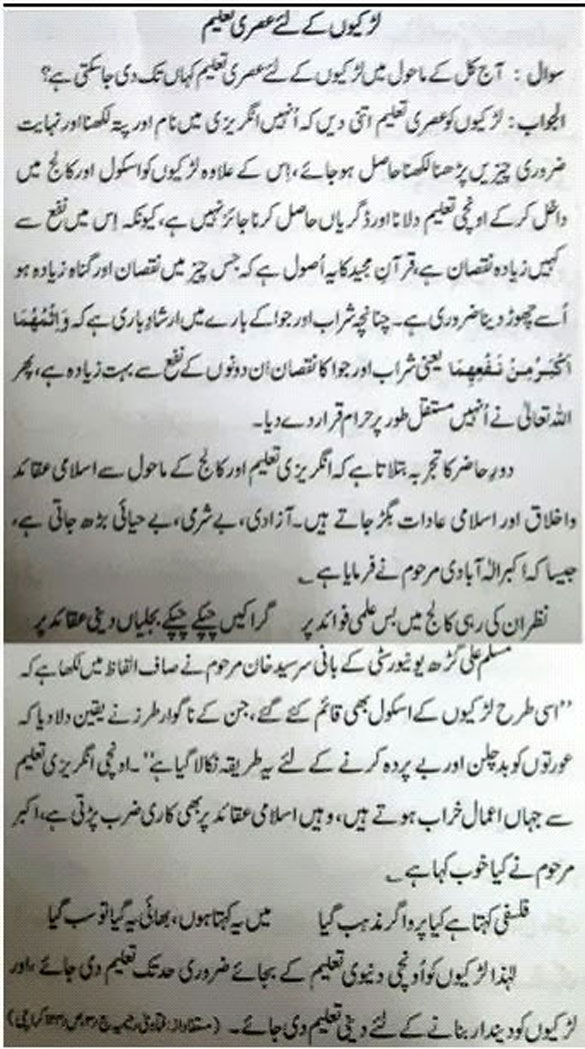 The gist of Urdu text is as follows:

(“A girl should be given modern education to the extent that she is able to write her name and address and read and write some important things. Apart from this sending girls to schools and colleges for higher education and getting degrees is “Jayiz Naheen Hai” (religiously not permitted) because there is more harm than good in it. The principle of the Quran is that the things in which there is more “loss and sin” should be given up. It is said in the Quran about alcohol and gambling that “Wa Ismuhuma Akbaru Min Nafeehima”- i.e., there is more loss than benefit in alcohol and gambling and hence Allah has made them HARAAM permanently.

The present day experience has shown us that the English education and college atmosphere have spoiled the Islamic beliefs, character and conduct and increased freedom, shamelessness and obscenity among girls.

The founder of Aligarh Muslim University has written in clear terms, “Schools for girls were established and their outcome proved that it was invented to turn women to bad character and make them give up Purdah”.

High English education spoils good character and damages Islamic beliefs. Hence girls should not be given high worldly education and to make them “Deendar” (pious), Islamic education should be imparted to them”.)

The above fatwa is a bundle of distortions. A boy or a girl can go astray anywhere, even within the four walls of the house if not guided properly and not necessarily in educational institutions alone. What is important is proper upbringing of boys and girls.

Sir Syed Ahmed Khan is a great reformer and a revolutionary par excellence in the field of education.  He never opposed education. The services he has done for the educational and economical uplift of the Muslim community can never be forgotten. To know about him and his contributions to the community and country, the following link can be seen:

We thought that in some remote places in our neighbouring countries girls are prevented from going to schools and colleges by Taliban. But it is not the case. Even here some people are not only writing but also speaking against giving modern education to girls. We have to hang our head in shame.

One fails to understand why the oldest  fatwa perhaps given during the British period and at the time of freedom struggle has been reproduced in the new book mentioned above and seeking modern education is condemned and considered “Najayiz” (prohibited) It is really shocking beyond expression.

It is not known what is in store for us - a backward Muslim community – if this anti girl’s education movement is allowed to continue without any check. Our intellectuals cannot keep quiet on this matter.

The modern education given in educational institutions consists of medical, engineering, science and arts etc. and the medium of instruction is mostly English and of course in some schools and colleges some science and arts subjects are taught in any other regional language or Urdu. It is not just the English education as the fatwa says.

The modern education has helped people to serve the humanity. There are many who are spreading the Islamic message of human equality and brotherhood after attaining higher education. Prophet Mohammed (sal-am) has said that seeking education is compulsory for every male and female and that it should be achieved even by going to far away countries like China. Hazrath Imam Shafi (R) has stressed the need for medical education. In the history of Islam we come across instances of how educated prisoners were asked to teach uneducated prisoners and honoured by releasing them after getting their service. The holy Qur’an and the sayings of the Prophet (SAWS) stress the importance of knowledge and wisdom one should possess to lead a life with all dignity and decorum.

It is very unfortunate that we -Indian Muslims - are educationally and economically backward.  The educational backwardness is the main cause for our economic backwardness, superstitious beliefs and many other problems we are suffering from.  It is not easy for an ignorant person to face the present challenges of life.  Of course there is some awakening among us now but it is not as much as among our non-Muslim brethren. It is also a fact that South Indian Muslims are somewhat educationally advanced than North Indian Muslims.

All realise that modern education is a sine qua non for progress and prosperity of a community and also for living a life of dignity in this highly materialistic world. Islam came to eradicate ignorance and infuse light of knowledge among the people. It succeeded to a great extent. But unfortunately there are some people even in this age who say “no” to the education of girls and their empowerment.

The historical reasons responsible for the hatred of English education among Muslims are no more valid now.  We must have the education necessary for our times.  The community has to produce more and more doctors, engineers, IT professionals, teachers, business magnates etc.