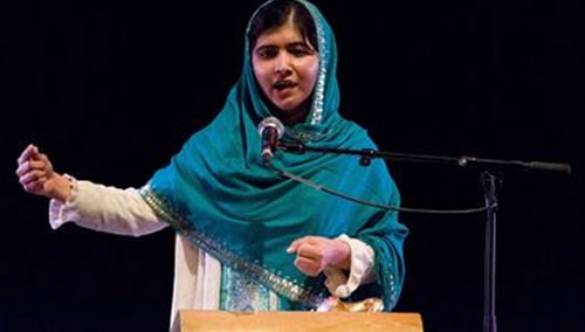 Malala Yousafzai gives a speech after receiving the RAW in WAR Anna Politkovskaya Award at the Southbank Centre in central London on October 4. JUSTIN TALLIS/AFP

This Friday, we will know whether the voices of nearly half a million people who lent their signatures to a petition, penned on a breakfast table in Toronto, will produce the youngest ever winner of the Nobel Peace Prize — Malala Yousafzai.

I remember the gloom at our breakfast table on Sunday, Oct. 12, 2012. We had just heard the news that the Pakistani schoolgirl who had written an on-line diary as “Gul Makai” about life under Taliban rule, had been shot in the head.

Surely, I thought at the time, this child could not survive the assassin’s bullet. I was convinced Malala would end up as one more casualty in the infinite pool of those who have drowned in the scalding lava of Islamo-fascism that is slowly engulfing those who seek liberty and freedom.

But what could we do sitting thousands of miles away in the comforts of Cabbagetown?

My wife, Nargis Tapal, suggested I use my Sunday afternoon show on NewsTalk 1010 to talk about Malala, who had captured my heart, and in whose face I saw the millions of innocent Muslim girls who for centuries have suffered the stifling of their very souls, until bundled off to strangers to live as obedient wives.

I was skeptical. “Who would care in Canada about a teenage schoolgirl in Pakistan?” I asked, as cynicism and pessimism induced me to inaction.

“Why not start a petition?” my wife suggested, “and ask your listeners to sign it.” “Petition who and for what?” I asked.

“Create an online petition to nominate Malala Yousafzai for the Nobel Peace Prize,” suggested Nargis. That was a “eureka” moment.

Soon I was on Change.org with a petition to the Nobel Foundation, suggesting the name of Malala Yousafzai for the 2013 Nobel Peace Prize, before heading off to the radio station for my weekly show.

What happened in the next few hours was beyond anything I expected. By the time I reached the station, over 1,000 Canadians had already signed the petition. I received a call from Change.org spokesman Jordy Gold, suggesting I address the petition to Canadian politicians, as only members of Parliament can nominate someone for a Nobel Peace Prize, not ordinary people. Good advice.

By the end of that week all of our federal parties and leaders, including the prime minister, who hardly ever agree on anything, endorsed the campaign to support this little girl, halfway around the world.

Now, a citizens’ movement that began as a simple petition could make history on Friday.

Malala Yousafzai deserves the Nobel Prize, not just because she epitomizes courage and freedom, but because in seeking freedom from the Taliban in the East, she has lost some if it to the public relations men in the West, who now manage her affairs and have unwittingly stolen her childhood from her.