There’s a narrow band of outrage for 21st-century women in America. There’s the occasional sling and the odd arrow aimed our way, but women can stand up to men when men need standing up to, and pay no price for it. Women of the First World enjoy the luxury of free speech and the separation of church and state, blessings unimaginable in the grim places of the world.

Women in the West thus have a particular responsibility to focus a light on cruelty to women elsewhere. Sometimes one brave woman can illuminate the horror of certain strains of Islam that make the oppression of women an everyday part of their lives. Meriam Ibrahim, 27, is a mother of two in Sudan, the youngest less than a fortnight old, and who is under a death sentence for refusing to renounce her Christian faith and convert to Islam. Her heartbreaking story comes to us as through a medieval lens colorued by ignorance, barbarism and fanaticism. 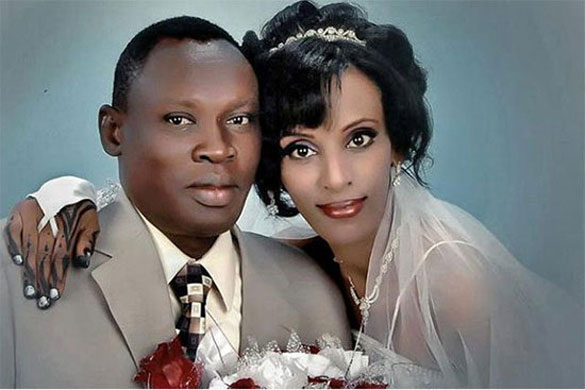 A wedding photo of Daniel Wani and Meriam Ibrahim

The headline across a British tabloid tells the gruesome story like it is: “Wife set to hang for marrying Christian.”

The photograph in the newspapers shows Mrs. Ibrahim as a beautiful bride in a long white dress, a sparkling tiara, with her arm draped around Daniel, her husband, an American citizen, on her wedding day in 2011. Now she is shackled to the floor in a filthy Sudan prison cell with her toddler son and her new daughter. The court was not without Shariah mercy: She has two years time to wean the infant before she is to be lashed 100 times, and then what is left of her is to be hanged until she is dead.

She was convicted of apostasy, the abandonment of a religious belief, and adultery, capital crimes under Shariah law. She’s considered an adulteress since the Sudanese court vacated her marriage because in Sudan a marriage between a Muslim and a Christian is invalid, although she is a Christian married to a Christian. This is the Muslim version of Catch-22.

She told the court: “I am a Christian, and I am not an apostate.” She never abandoned Islam because she has never been a Muslim. Her mother was a Christian and her Muslim father abandoned the family when she was 6. But Shariah law dictates that the child of a Muslim is a Muslim. Her husband, now a biochemist had fled Sudan during its brutal civil war, settled in New Hampshire and became an American citizen.

The semi-good news is that the outrage has gone both viral and global. Millions are peppering Sudanese embassies and legations across the world with protests and pleas for her freedom.

Mrs. Ibrahim’s plight has particularly outraged Europeans. Leaders of Britain’s three main political parties, Prime Minister David Cameron and the archbishop of Canterbury are agitating for her release. The State Department insists that it is “fully engaged,” whatever that means. Neither President Obama, who has been busy trading terrorist chiefs for a captured American soldier who may be a deserter (or worse), nor the first lady, always looking for a cause, have signed a petition or said anything to add to the international pressure.

Congressional demands to cut off $300 million in U.S. economic aid, mostly of food and medicine, is not regarded as a good option because a government that imprisons a mother and her two children, one of them a nursing infant, is not likely to concern itself with the hungry, the halt and the lame. Sudanese President Omar Bashir has been identified by the International Criminal Court as a war criminal.

“The refusal of the government of Sudan to allow religious freedom was one of the reasons for Sudan’s long civil war,” Rep. Christopher H. Smith, New Jersey Republican, chairman of the House committee on U.S. policy in Africa, tells Fox News. Now that the largely Christian south has split from the north, Lt. Gen. Bashir is likely to enforce the brutalities of Shariah law with a vengeance.

Mr. Wani has hopes that the international attention will force Sudan to free his wife, but when it does, the couple might not be allowed to leave the country with their children. It’s inconceivable that they would leave without them.

Several senators, both Democrats and Republicans, say they will introduce legislation condemning Sudan’s treatment of Mrs. Ibrahim. Sen. James M. Inhofe, Oklahoma Republican, asked Mr. Obama to grant political asylum. These are nice gestures, but they’re only gestures. Only the president can win her freedom, and he can do it if he tries. First he has to interest himself in the outrage. Decisive action is not this president’s talent.

Suzanne Fields is a columnist for The Washington Times and is nationally syndicated.