Eligible to Marry, But Not To Vote

International Day of the Girl Child

I ceased to be 16 more than a decade ago, and yet, the very thought of marriage is enough to send me into throes of panic. I am just not ready; I tell myself and my parents, shuddering at the prospect of writing off my future to a man, any man, no matter how liberal. Our cook, Shefali, who is my age, smiles indulgently; in agreement that marriage is a gamble. Unlike me, however, she didn't have a choice in the matter (and we can debate some other day how much of a “choice” it even is for us middle-class women), married as she was at 13, and pregnant by 14. At 16, her husband started beating her; at 18, he left her for another woman. By the time she was old enough to vote, she had already lived a lifetime of anguish, torture and misery. 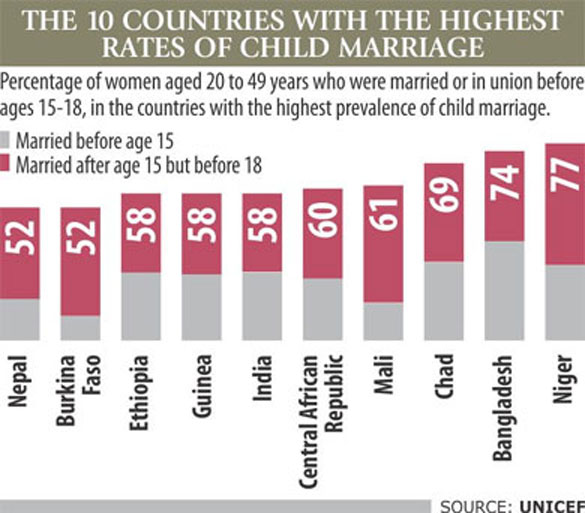 I don't need to ask her why her struggling parents insisted that she drop out of school to marry a 37 year-old-man, an owner of a small shop. Or whether she “consented” to the marriage. Or if she knew what would happen to her on her wedding night; if she knew the meaning of rape then. I don't ask her if she wishes her life had played out differently. I don't ask her all these because I know she would, again, smile at me dismissively, because even though we are the same age and live in the same country, she knows I know nothing, versed as I may be in fancy theories from foreign universities.

I do ask her, however, what she feels about the new proposal to decrease the minimum age of marriage from 18 to 16. Under the existing Child Marriage Restraint Act 1920 (amended in 1984), the legal age of marriage for girls is 18 and for boys 21. She answers me with another question: “But why would the government do so? Does it want to make sure what happens to me happens to every other girl from my background?”

“Why would the government do so?” really is the query of the day. This, after all, is the same government that has consistently advocated against child marriage and enacted some progressive pro-women and pro-children laws and policies in the recent past. The new proposal has left many of us bamboozled, reminding us that this country is slowly but surely turning into a Hirok Rajar Desh. I had hoped that the government would at least provide a comprehensible explanation for its decision, instead of offering justifications that insult our intelligence and the lived experiences of many women in this country. Why else would our honourable government officials proclaim defences like (to paraphrase): “Our girls are mature by 14'”or “they run off at 15 anyway, so, erm, why not?”

Although Bangladesh has made tremendous progress in attaining the MDG goals, it has one of the worst records of child marriages in the world. According to a UNICEF report published in July of this year, 74% of Bangladeshi girls under 18 years, and 39% of girls under 15 years are married off. These statistics are upsetting, no doubt, for us and for our government, but the solution certainly cannot lie with reducing the minimum legal age of marriage and then patting ourselves on the back for our tremendous success in reducing child marriage!

In a country where the existing legal framework still considers anyone under 18 a “child,” what exactly are the implications of instituting this new proposal? The Children's Act 2013, for instance, clearly designates that anyone under 18 is a child, in accordance with the Convention on the Rights of the Child (CRC). In the eyes of the law, she is not an adult, and as such, is tried in a juvenile court, her age considered an important factor in deciding her punishment. She is unable to vote. Just consider the absurdity: a 16-year-old, too young to decide whether the AL or BNP should come to power, but old enough to take care of another family, engage in (often forceful) sexual relations, and bear and rear children. By reducing the minimum marriage age to 16 (when they are still considered children in our Constitution), isn't the government, in essence, legalising child marriage?

I am concerned by the numbers that suggest that girl brides are far more likely to be victims of domestic violence and that they are less likely to receive proper medical care during pregnancy and child birth. Over 20% girls who are married off before reaching 15 years become mothers of three children or more before reaching 24 years. The government's decision will, if not put more girls at risk of violence and jeopardise the health of young mothers and their children (which is highly likely), then at least give these discriminatory practices legal status.

If the government is really so embarrassed by the statistics, then it should find ways to tackle the multi-dimensional socio-economic reasons that sustain child marriage in a highly unequal capitalist society, and challenge entrenched patriarchal gender norms. It should provide free universal education to girls, and ensure her reproductive rights. It should guarantee a girl child's constitutional right -- basic necessities of life, including food, clothing, shelter, education and medical care, right to reasonable rest, recreation and leisure and the right to social security, to public assistance in cases of undeserved want arising from unemployment, illness or disablement, or suffered by orphans (Article 15). At the very least, it should let our children be children. Instead, in 2013, it spent ZERO money on the National Women's Development Policy 2013-14, even though there was an allocated budget for the Ministry of Women and Children Affairs (for more details, see the report of UN Rapporteur on violence against women after her visit in 2013). And now, it has gone ahead and approved this ridiculous proposal. Talk about cutting the head off to get rid of a headache!