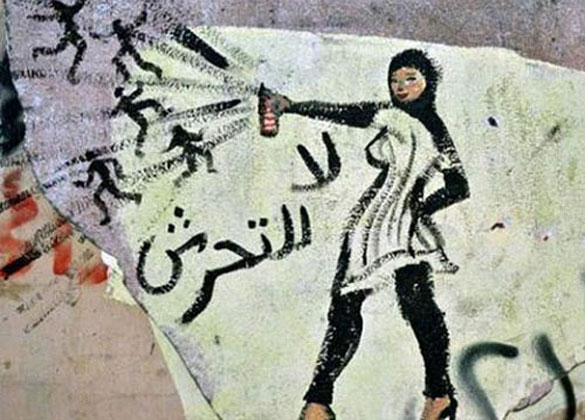 ON April 6, Gaber Nassar, president of Cairo University, is to sign a cooperation protocol with the “Shoft Taharosh” movement (Arabic for “I’ve been a witness to harassment”) which was founded in Cairo in 2012.

“The Ministry of Higher Education, the university president, and university security have to facilitate the movement’s job and cooperate with volunteers who would be raising awareness on campus about the dangers of harassment and ways to fight it,” Farid said in a press interview.

The protocol is to be signed between Nassar and movement representative Azza Kamel. According to Nassar, members of the group are to obtain special IDs that will enable them to enter the campus. “They will soon come to my office to complete the necessary paperwork in order to start their work on university grounds,” he said in a TV interview.

This news comes in the aftermath of a sexual harassment incident against a female student on campus which made international headlines. The movement, which identifies itself as “a pressure group that works on monitoring and documenting sexual harassment crimes against women,” was the first to report the incident.

According to the statement it issued, dozens of male students surrounded a female student near Cairo University’s School of Law on March 16 and harassed her. “They first harassed her verbally then started touching her and attempted to strip her of her clothes,” said the statement.

“The girl had to hide in the ladies room until security personnel were able to save her and get her out of campus.” While media reports and the university president referred to the incident as unprecedented, the movement stressed in the same statement that “this is not the first incident of its kind” and that female students have always been subjected to different forms of sexual harassment on campus.

The incident triggered angry reactions among intellectuals and rights activists not only due to the nature and context of the incident, but also due to many of the responses that followed. The most controversial response was that of Nassar himself when he gave a phone interview live on TV a day after the assault took place.

According to Nassar, the girl, who is shown in the video wearing black pants and a pink top, was wearing a loose garment and took it off upon entering campus.

“University security does not admit students wearing improper clothes,” he said. “Students’ clothes have to be in line with society’s traditions and we will never allow otherwise to happen.”

Responding to Nassar in the same talk show, Farid expressed his shock at the university president’s push to blame the victim instead of acknowledging his moral responsibility for her and objected to his statement about the university administration’s intention to take disciplinary action against the girl and the men who assaulted her. He also refuted Nassar’s allegations about the incident being a first.

“A year ago a student from the School of Engineering was sentenced to a month in jail and this was in the press and everyone knew about it,” he said. “He is clearly not doing his job properly at the university.”

Farid added that the movement receives dozens of complaints from female students who are harassed by their male colleagues and sometimes by their professors.

On March 19, Nassar issued a statement in which he fully condemned the harassment incident. “The perpetrators of this crime have to be penalized and the victim is not to be blamed at all,” said the statement. “There is nothing that justifies such a crime.”

Nassar apologized for his comments on the victim’s clothes, which he attributed to the tension caused by the magnitude of the incident. “I also want to stress that the girl is not to be subjected to any disciplinary action. She will only be summoned to give her testimony about the incident.” He also called in a TV interview upon all students who were witnesses to the incidents to give their testimony and pointed out that students involved in the assault could be subject to dismissal from the university.

While Nassar’s change in stance was welcomed by women rights organizations, which had earlier described his initial response as “regressive,” the reaction of male students interviewed by several media outlets was considered shocking.

In a survey conducted by the Egyptian daily independent Al-Shorouk, one of the students, while stressing that the victim was not wearing a loose garment on top of her clothes as claimed by Nassar, blamed university security for admitting her into campus “in such improper clothes.” He also said that what the boys did should not be considered harassment.

In another survey conducted by the news website Veto Gate, a student who witnessed the incident blamed the victim for her “extremely provocative outfit.” When asked if he ever thought of reporting the incident to the dean, he said: “Why should I report it? She had it coming. She provoked the people.” Another student blamed the victim’s parents “for allowing her to go out like this.”

Amin criticized the university administration for not being firm enough with the girl and argued that clothes are not a matter of personal freedom. “She is free to wear whatever she wants or not to wear anything at all when she’s out spending the night at bars and whorehouses, but not in state-supervised institutions,” he said. “She was obviously going to campus for another reason that is not related to education.”

“If there ever was a case that demonstrated the senselessness of victim-blaming in sexual harassment, it is that of Egypt,” wrote Hannah Somerville in The Independent last week.

In her article entitled “Sadly, this poor woman’s experience at Cairo University is all too common in Egypt,” Somerville noted that a recent UN survey revealed that almost 99 percent of Egyptian women have been subjected to sexual harassment. She, however, expresses her surprise at the lack of official records for the number of harassment incidents owing to women’s fear of exposure.

“Strikingly, the majority of data on the topic comes from NGOs and international organizations, for the simple reason that many women do not report such events to the police,” she added.

In an article entitled “The streets belong to them - women should stay at home,” published in Al-Masry Al-Youm on March 19, writer Rania Ibrahim linked the Cairo University incident to the general allocation of space between men and women in the Egyptian society.

She recalls seeing a group of young men celebrating New Year’s Eve in the streets while she, driving back home at the same time, made sure she locked her car door so that none of them would be able to assault her.

“While men are out celebrating, thousands of women are at home for fear of going out and being harassed and very few take the risk,” she wrote.

“The city’s nightlife belongs to men because they can do whatever they want without being assaulted or intimidated.” The Cairo University incident, Ibrahim argued, proves that the spaces women have been “allocated” by Egyptian society are getting more and more limited.

“Women are now threatened not only in the streets or in public transportation, but also in their work or study places,” Ibrahim said, adding that women in Egypt are seemingly allowed to practice their rights while in reality they are being deprived of them.

“It’s as if women are allowed to leave their homes under unspoken societal terms: you can work and get an education, but be prepared to bear the consequences if you are humiliated or sexually assaulted while doing so.”