If Women Ran the World, There Would Be No Wars

More women have taken up national leadership roles or key positions within decision-making bodies linked to governments around the world than ever in recent years. It is hard to deny the presence and influence of women, as they are and have always been the key to any country’s political landscape. 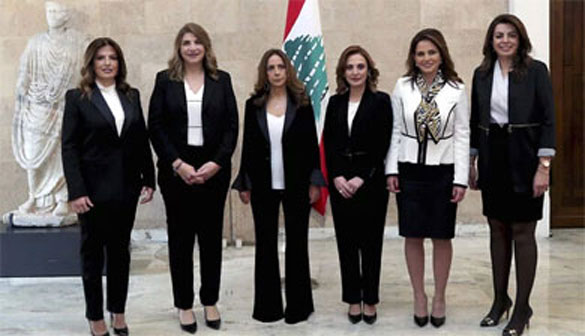 This year has started with the appointments of women to some important positions both in Europe and the Arab world.

Amid the mass protests shaking the country, Lebanon has appointed a female member of parliament as its defence minister, with Zeina Akar becoming the first female to take up such a role in the Arab world. Akar, a descendant of a Christian Orthodox family, was appointed despite her non-military or defence background.

Although Lebanon is considered to be liberal within the regional context, with women occupying a significant place in public life, patriarchal norms are still dominant in the country, as its politics continues to revolve around men. This is partly related both to the complex political power-sharing system in Lebanon, which is based on religious and sectarian sensitivities, and also women’s status in general in the Arab world. However, last year, the country did name its first female interior minister, who hailed her appointment as a “point of pride for all women.”

Following the resignation of Saad Hariri, new Prime Minister Hassan Diab leads a government that includes six female ministers. The new Lebanese government has a busy agenda to deal with in order to get things on track in the country. Among the challenges faced by this Cabinet is to gain the trust of the public, build confidence and peace among several factions in the multi-ethnic society, improve the economic situation, and effectively respond to the demands of the protesters. Thus, both challenges and opportunities await the female ministers of the new Cabinet. The defense and interior ministers have already broken the stereotype that women are ill-suited to handling situations related to a country’s national security.

Other important appointment news came from Greece, which has a historically low number of women in senior political positions. Greece’s lawmakers this week elected their country’s first female president — 62-year-old high court judge and human rights advocate Katerina Sakellaropoulou — by an overwhelming majority. The unprecedented step of proposing a progressive female judge to assume the role of head of state caught many by surprise, but Prime Minister Kyriakos Mitsotakis said: “The time has come for Greece to open up to the future,” adding that change in Greek society “starts from the top ... with Greek women receiving the position they deserve.”

It is significant that a nation used to the divisiveness of bipartisan politics will soon have a non-partisan president, who will enjoy broad support from across the political spectrum. Sakellaropoulou was nominated by the ruling conservative New Democracy party, but also managed to secure the backing of the main opposition party Syriza and the center-left Movement for Change. However, it is not new for this veteran judge to break the glass ceiling of the patriarchy, as she was also the first woman to serve as president of the Council of State, the country’s top administrative court.

Ahead of becoming the figurehead of a country that is trying to get out of a decade-long financial and political crisis, the president-elect noted the “difficult conditions and challenges of the 21st century, including the financial crisis, climate change, the mass movement of populations and the consequent humanitarian crisis, the erosion of the rule of law, and all manner of inequalities and exclusions.”

Last October, Belgium’s king appointed Sophie Wilmes as the country’s prime minister, making her the first woman to hold the office in the country’s near-200-year history. She is another of the many examples to have appeared recently that signal the improvement in the presence of women in significant positions.

Needless to say, having more women ministers will encourage others to join politics. There is an old stereotype that says “if women ran the world, there would be no wars.” This is both right and wrong. We cannot totally agree with this statement due to some historical facts. Turkey’s first and so far only female Prime Minister Tansu Ciller and India’s Indira Gandhi, among others, could be listed as examples in this case. This may be because, in societies where the patriarchy has more supporters, female leaders are considered “weak” due to their gender and this perception encourages some women leaders to adopt more aggressive policies. However, male-dominated leaderships have not brought peace either. Therefore, although the above statement might not be strictly true, we might agree that having more women in senior leadership positions would make a significant change, which would be more likely to be positive than adverse.

Original: Women breaking the glass ceiling all over the world