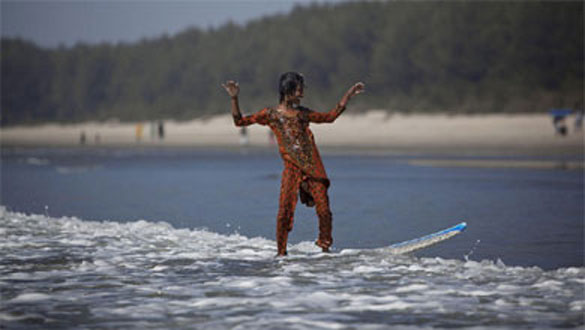 The girls ply this endless stretch of beach every morning, weaving through flocks of tourists to sell snacks, the ocean breeze whipping the gossamer scarves of their traditional Shalwar Qameez.

They rarely went into the water. In their conservative world of southern Bangladesh, it was said, decent girls didn't swim.

Three years ago, one of the girls noticed a lifeguard gliding across the waves on a surfboard. It seemed to her almost like magic. Shoma Akthar, the youngest of six sisters, did not lack confidence. When the surfer, Rashed Alam, came ashore, she told him, "I want to do that."

It was several weeks before Shoma worked up the courage. She knew her mother wouldn't approve of anything that took her away from working on the beach.

Surfing offered a perfect rebellion. She began stealing an hour or two late in the morning to get in the water. Within days, others followed.

For these eight girls ages 11 to 14, surfing has helped them reclaim a piece of their childhood. It is a sport that conjures up freedom, verve and sunlit horizons — attributes not usually associated with the life of a young girl in Bangladesh, an overwhelmingly Muslim country of 160 million with one of the world's highest rates of child marriage.

Now they are a daily sight in the rolling gray waters: Alam, 26, and a gaggle of girls atop battered boards, sliding across the surf and defying customs as old as the Bay of Bengal.

"I was scared of the waves," said Shoma, a chatty 14-year-old wearing waterproof lipstick, her hair tied in a ponytail. "But not anymore."

The young surfers kept their new pastime a secret for weeks before telling their families.

"The girls' parents want them to work," Alam said. "We have to convince them that they can have a future outside the house."

In Cox's Bazar, a shabby coastal town near the border with Myanmar, adulthood often begins early. Poor children are yanked from school to sell food and homemade trinkets so that their families can eat.

This was how Alam found the eight girls: hustling to earn a dollar or two a day, the weight of their families on their slim shoulders, their futures preordained.

"When I started surfing, I began thinking about my dreams," she said. "Now I think there are lots of things I want to do."

The girls might never have had the chance if an Australian hadn't left his surfboard behind when he passed through Cox's Bazar in the 1990s. The boys who found it became Bangladesh's first surfers, learning to ride the gentle swells along what tourist brochures describe as the world's longest uninterrupted beach.

Alam grew up working on the beach too, hawking horseback rides and lounge chairs to tourists. He taught himself to surf on a borrowed board and helped start the Cox's Bazar surf club in 2008. It now boasts 55 members and a small collection of second-hand boards and equipment, most of it donated.

He got a job as a municipal lifeguard and adopted the surfer chic — board shorts, carefree stubble, Quiksilver cap pulled low. When he started teaching the girls, it was as if he had found his calling.

One of the youngest, 11-year-old Johanara, was terrified and struggled for months to balance herself on the board as it zoomed across the water.

When she finally stood up, Alam gave her a long ovation.

"It was the best moment of my life," said Johanara, the oldest of five.

One recent evening at Johanara's house, a Bangla movie played on a tiny television as children sat watching at the edge of a bed. A surfboard from Alam stood in a corner, obscured in the dim light of a lone bulb overhead.

Johanara's father, Mohammed Gulab Hussein, was a struggling house painter who hadn't had steady work in months. Her mother often ordered Johanara and her 8-year-old brother to work on the beach until dark, dragging a barrel filled with water bottles, chips and cigarettes.

"I try to encourage my daughter," Hussein said. "But she's our oldest and we need her to support the family."

None of the parents reacted well to hearing their daughters were surfing. Besides the danger, they worried about the girls' reputations in a profoundly male-dominated society.

Neighbours gossiped. Some of the girls were harassed on the street or riding in auto-rickshaws. A few parents said young men came to their houses accusing the girls of behaving improperly.

"Men assume they're coming to the beach to do bad stuff," said Venessa Rude, Alam's Bakersfield-born wife, who first came to Cox's Bazar four years ago to volunteer for a charity.

"No one is used to seeing confident girls like this."

The parents of two sisters, 13-year-old Rifa and 11-year-old Aisha, registered their displeasure with open palms, leaving Aisha with a bruise under one eye. The girls had grown so afraid of their father that when they saw him in town — usually frying parathas, or flatbread, at a scruffy roadside canteen — they would duck into a shop or dive into the back of a rickshaw.

But in the water, they were fearless. One night, Rifa lunged into the ocean to chase a soccer ball after a boy challenged her. Alam, aware that any mishap involving the girls could end his surfing project, was mortified.

"I know you're a good swimmer," he scolded her afterward, "but you can't do that!"

Several times, Shoma's mother, Maryam Katho, came down to the beach to drag her daughter back to work.

The two live by themselves in a one-room house made of sand on a steep hillside a mile from the beach. Shoma's father had gone to live with his second wife; her sisters all had been married as teenagers.

Her mother woke before dawn to boil eggs over a small fire. Soon after sunrise it was time for Shoma to head down to the beach to sell the eggs — their only source of income.

At one point last year, Shoma disappeared from the beach for a week. Fellow surfer Sumi learned she had been sent to work as a housekeeper for a nearby family, and marched there to confront Shoma's boss.

The woman shooed Sumi away with a volley of curses.

Alam paid house calls to win the trust of each parent. He persuaded Shoma's mother that her daughter shouldn't work as a maid because she was becoming a talented surfer. A few months later, Shoma placed third in a local competition and won $40, the equivalent of two months' salary as a housekeeper.

To celebrate, she and her mother rode a bus to the nearby city of Chittagong for a day, the first family trip she could remember.

Katho has warmed to her daughter's hobby. One evening in her home, she laughed when asked whether she wanted Shoma to be married soon, like her sisters.

"She'll get married when she wants," Katho replied. "She might be going surfing in Hawaii one day."

To show that surfing could lead to a career, Alam began training some of the girls in CPR and rescue, hoping that some could become lifeguards when they turn 18. In the afternoons, Rude tutors the girls in English to prepare them for tourism or office jobs.

An American photographer in Bangladesh, Allison Joyce, learned of the girls and began visiting regularly to document their stories. Last year Joyce helped set up an online crowd-funding project to support the girls' families.

Every month, each family receives about $50 worth of rice, dal, cooking oil and other essentials — enough to lift some of the financial burden from the girls.

"Without that help," Johanara said, "my mom would make me stop surfing."

Under gray skies one recent morning, the girls gathered for lifeguard training. The day's lesson: ocean rescues. Johanara, wearing a tomato-coloured tunic, waited her turn at the edge of the beach. Sand caked the bottoms of her tights.

Alam blew his whistle and she raced into the water.

Johanara's mother had come down to the beach with a basket of trinkets and two younger children in tow. She pulled up one end of her green sari to shield her face from the wind as she scanned the crowd for her eldest daughter.

Johanara finally appeared as a distant speck of red, beaming as she emerged from the water. She was too far away to see her mother smiling.