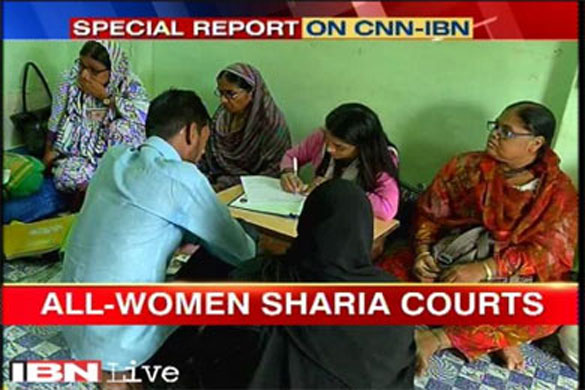 In this courtroom, there are no chairs. The jury of women sits on long, narrow mattresses which are almost as hard as they are. "This is the abandon-and-fetch fellow," one of them introduces a gaunt man carrying a ladies' umbrella who has just entered the room. His name doesn't matter because they know his story. He divorced his wife over SMS last year, returned to fetch her after she filed a complaint only to throw her out soon after. The room has seen him five times now and suspects they'll see him again, but the room also likes a happy ending. So, one of the jury members phones his mother-in-law and asks her to bring her daughter along.

It is just another Tuesday at Mumbai's Shariah Adalat which completed two years this July. Located on Bandra's Kherwadi road, it is among four all-women Shariah courts in the country - including Dindigul, Ahmedabad and Rajasthan - that were established by the Bhartiya Muslim Mahila Andolan (BMMA) to help poor Muslim women get justice in matters of family and marriage through Quranic means. "Since Muslims do not have a codified personal law, women often suffer injustice due to misinterpretation," says Zakia Soman, founder of BMMA, adding that instances of men divorcing over Facebook and email have risen. "Invariably, at the Quazi courts which are run by men, the understanding is very patriarchal," says Soman. However, since the all-women Shariah courts run as per BMMA's own draft of the Quran-compliant Muslim personal law, it isn't partial to men.

Released last year, this draft is the result of a seven-year-long consultation with lawyers, Muslim scholars and public surveys. It denies permission for polygamous marriage, mentions the age of marriage at 18 for girls and 21 for boys and has called for a ban on oral, unilateral and triple Talaq. The members of the Shariah Adalat - gritty, senior women who hail from nearby slums - follow a simple process. First, they accept a petition from the victim and send a notice to the respondent. The two parties are called in along with family members for a settlement. If they don't come to an understanding after three or four sittings, the members visit them personally or seek the help of the local qazi, lawyers and even cops at times. This could involve travelling in groups to flammable pockets in Gulbarga to extracting maintenance or waiting at police stations on the India-Bangladesh border at midnight for a rickshaw - reasons why they started charging Rs 1,500 per case in Mumbai recently.

Most complaints are about divorce, maintenance and polygamy. Needless to say, tears and drama are routine. Once, a man stood at the door of Bandra's Shariah Adalat and said 'Talaq' thrice to his wife. "I told him to think about what he was doing and to think about his three kids," says Zubeda Khatoon, state convenor of BMMA, Maharashtra. Fondly known as Khatoon Aapa, she previously worked with a Mahila Mandal that handled cases such as the one in which a woman had signed a paper in a bank envelope only to realise that she had signed her divorce papers. "Our aim is to help these families reconcile," says Khatoon, who has just asked the abandon-and-fetch guy's bitter mother-in-law to leave the room so she can talk to her quiet daughter. "Do you want to go with your husband?" Khatoon leans in and asks the girl. "What will people say?" the girl mumbles, playing with her toenails. "Is the world going to feed you when you are hungry?" asks Khatoon.

Men come in to seek justice too, she says. In such cases, "we call both the husband and wife," says Khatoon. Interestingly, the title of the notice form this court sends women is 'Request' while for men, it's 'Notice'. Mostly, though, men are found guilty. At the Dindigul Shariah court, which sees 80 to 90 cases annually, a man once complained that his wife had abandoned him. When the Adalat sent a notice to the wife in Kerala, she called them up to tell them about his drinking problem and abusive ways. "The men feel that if the women are being provided with food and clothes, there is no problem," says Zaibunnisa Reyaz Babu, state convenor of BMMA, Tamil Nadu.

Neighbours sometimes call these women home-breakers, and family members dissuade them from doing the job. But most members who came to the Mandal as victims have long shed their fears along with their Burqas. "I stopped wearing the Burqa the day my daughter got a divorce," says the feisty, 57-year-old Rukhsana Shaikh, who realized then that society wasn't as important as her family. It was society that almost made her daughter - who passed SSC - stay in an unhappy marriage. "My daughter is now engaged to a good man and is working," says Shaikh showing a picture of her pretty daughter on her phone.

Every time she feels threatened while handling a case, Rukhsana Shaikh now pretends to click pictures on her cell phone as a safeguard. Shaikh also carries a Human Rights Association card ("though I don't really attend the meetings") which sometimes saves her from sticky situations such as the time she was in a village in Gulbarga, trying to extract alimony from people "who could cut you in half". They all wield clout locally and have learnt to use their individual strengths as tools. For instance, the silent, observant Mumtaz Jaffer Shaikh, who maintains a little diary of all the cases in Urdu, can easily detect lies. Recently, when she was waiting at a police station in Kerala to extract maintenance from a man, his brother-in-law showed up instead saying the man was serious and had to be admitted to a Bangalore hospital. Shaikh immediately asked for the name of the hospital and ward number. "The man appeared the next day," says Shaikh, adding that he agreed to pay Rs 5,000 as monthly maintenance for his wife in Mumbai.

In the process of dispensing justice, the women have transformed themselves. Fatima Qureshi says she hasn't taken dowry from any of her four daughters-in-law. It was at this court that Qureshi discovered that "everyone has problems but not everyone discloses them," and where Khatoon started praying for happy endings.

Right now, the resolution of the abandon-and-fetch case will have to hurry as it is 6 pm already. "Is there even a slight doubt in your heart?" a relative of the girl, who has suddenly arrived, asks her. Silence. "Is there even a slight doubt in yours?" he asks the man. Silence. It is raining outside. "Go to Bandstand," the relative suggests. "Enjoy the rains as husband-wife." The jury votes for it. The couple leaves under the ladies' umbrella.