As a Pakistani Woman, I’d Welcome a Police Force That Didn’t Rely on Imams 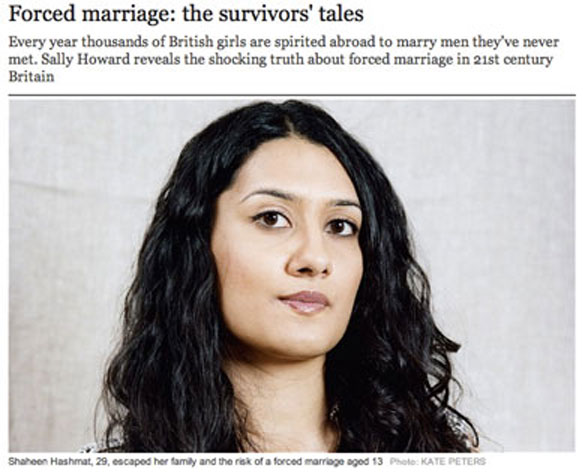 Shaheen Hashmat, 29, escaped her family and the risk of a forced marriage aged 13 Photo: KATE PETERS

Like everybody else, I read Professor Alexis Jay’s report in the systematic failure to protect young girls in Rotherham, with disbelief and anger.

It's simply awful. But, for me, it struck a note of personal horror somewhere deep down.

You see, I’m a Pakistani woman born and raised in Scotland, as part of a Muslim family. And, at the age of 12, I relied on the help of police and local authorities to help me escape from honour abuse and the threat of forced marriage. As a result of my experiences, I now dedicate most of my spare time to raising awareness of these issues. I’m currently working to establish a free mental health service for those who have suffered similar abuses.

Throughout the course of my work, I’ve come to understand a few things. If you are a rape victim, you can generally expect to be dismissed, disbelieved and made to relive your terrifying experiences in great detail in order to convince a courtroom that justice should be served on your attacker. Your behaviour and character will be dissected to deduce how irresponsible and, therefore culpable, you are.

And, after all that is over, you can expect little support in recovering from your ordeal and rebuilding your life. While some may believe that the handling of rape and sex abuse cases has become more effective in recent years, it’s now clear that this is simply not the case.

The Rotherham report states that police regarded many of the victims involved with contempt; disbelieved reports containing ‘stark evidence’ of child sex exploitation; closed cases of such abuse prematurely; and failed to follow up on information they had been given. (Indeed, a young female victim speaking on Radio 4's Today programme alleged that a bag of clothes she'd collected as evidence was 'lost' by police).

A former leader of Rotherham Council agreed that the organisational culture was ‘macho’ and sexist, and there was mention of an issue with members accessing pornography on council computers. One officer, who was interviewed as part of the inquiry, recalled a colleague being told that “she ought to wear shorter skirts to meetings and she’d get on better”. Another remembers a senior member of staff saying, “I know what I’d like to do to you if I was ten years’ younger”.

This attitude goes some way in explaining why professionals tasked with the job of protecting vulnerable individuals, might arrest a 12-year-old girl for being drunk and disorderly in a derelict house with a number of adult males, without questioning why she was there in the first place.

But, for me, one of the most striking aspects of the report is its damning description of the inability to address issues within the local Pakistani community, for fear of appearing racist.

There's no escaping the fact that the majority of perpetrators were of Pakistani origin - and that this directly led to insufficient action being taken to identify, and bring them to justice.

And, contrary to popular belief, this lack of understanding didn’t only endanger white victims. Cases were cited where Pakistani landlords and taxi drivers targeted Pakistani girls. Some victims were described as vulnerable because they were separated from their families, as I was at that age. There were issues of forced marriage and child abduction described. In 2005 alone, 12 cases of forced marriage were investigated in Rotherham - the highest statistic in the South Yorkshire area.

Nazir Afzal, Chief Crown Prosecutor for the North West, has extensive experience in dealing with this type of abuse, particularly after his involvement in the Rochdale ‘grooming trial’.

Afzal told me: “no community is entirely safe for women and girls. Many perpetrators were Asian but they did not limit their criminal behaviour to white girls, though many were. In many cases, non-white victims are even more reluctant to report these crimes, in part because of honour and shame issues.”

Imams can't do anything to stop abuse

Considering that just two meetings in 15 years were held with members of the Pakistani community about child sex abuse, it simply cannot be said that a comprehensive strategic investigation was conducted. Instead, imams from local mosques were approached and asked for help in communicating with local Pakistanis.

Fiyaz Mughal is the founder and director of TellMama UK, an organisation that measures and monitors incidents of anti-Muslim attacks. He thinks that such an approach does not always work, because, “faith leaders often lack the training and expertise to address issues of child sex exploitation, where it occurs in their area.”

He added that, “Failure to adhere to a zero-tolerance approach to rooting out those who are complicit in the cover-up of abuse has a negative impact not just on Pakistanis or Muslims, but also on those from other religious or cultural backgrounds who are seen to fit the bill as perpetrators. In just one day we have already seen a spike in incidents of anti-Muslim attacks being reported”

It’s clear that fear of being branded racist enabled the continuation of human rights abuses. It's a problem that doesn’t only occur in local communities but also at a national and even international level. It’s no surprise that other crimes, such as female genital mutilation and forced marriage, are also willfully ignored by authorities.

Of course it should be acknowledged that there were a number of systemic failures in this case, including lack of coordination in inter-agency responses, confusion over responsibilities for strategic action, failure to assess and manage risk – the list goes on. And, of course, we can acknowledge that some arrests were made and an effective strategic response was reported in some cases.

But the fact remains. Unacceptable misogynistic attitudes and inability to deal with the realities of policing a multicultural community has meant that 1,400 vulnerable victims were let down, by those whose sole task was to protect them.

I'm one of the lucky ones

I consider myself lucky - the police took my situation seriously and worked with discretion, speed and sensitivity. However social services did not follow up adequately after my escape and made the mistake of trying to mediate, saying that a continued relationship with my abusers was in my best interests. Most devastating of all was the lack of support offered in recovering after abuse.

It has had a lifelong impact and further cuts to mental health services have put me at risk on a regular basis.

This report demonstrates that lessons are not being learned. Isn't it time they were?

Shaheen Hashmat was brought up in a Muslim family and helped by the police and local authorities, after becoming a victim of abuse. It's given her a unique perspective on the Yorkshire town where 1,400 girls have been sexually abused by Asian men