Islamic Law in Relation to Marriage Protects Rights of Women

Islam seeks to create legitimate relationships where, in the relationship, specific status of wife is available to a lady as contrasted with trends which then prevailed, and even today prevail where, on account of the secular law proscribing more than one marital relationship, people increasingly indulge in extra-marital affairs and illegitimate liaisons causing any amount of disruption in both society as well as families.

Not being able to curb illegitimate or immoral behaviour patterns, societies have turned their laws into a joke by “legitimising” these: can one legitimise actions that threaten homes and families, the basic units of society, and expect the resulting social order to be healthy and not prone to promiscuity and debauchery? Since the answer to these questions is “No”, necessary and logically its follows that the answer to the question “Does Islam permit child marriages?” is necessarily “No. It does not.” 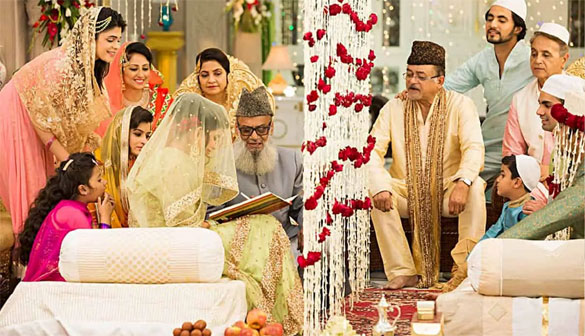 Islamic Law brought about changes in the existing situation restricting wives (read legitimate relationships) that a man can have to a maximum of four. Television serials and movies today merely reflect what has been for decades seen in “modern” societies: complete breakdown of factors such as honesty, truthfulness, reliability, loyalty, fidelity etc., insofar as marital relationships go, inevitable break-up of homes creating individuals who grow up divorced from a stabilizing influencing “envelop” of wholesome family life, accelerating breakdown of values, principles, morals and ethics in society.

Once a man and woman marry, their relationship is governed by the law, i.e., the Quranic injunctions and the Sunnah. A marriage contract has two aspects: since it prevents vulgarity, promiscuity and illegitimate relationships being established, protects a person from going towards sinful conduct, it has religious connotations and is not merely a secular contract alone.

Restriction over more than one marriage and the prevalence of monogyny is usually not feasible in the reality of a morally and socially clean society that Islam wants to build preventing promiscuity and illegitimacy of relationships. Monogyny, if made law, simply pushes polygyny underground, denuding women of right to maintenance and inheritance that the status of wife would entitle them to.

Thus Islamic Law actually serves to protect rights of women, prevents exploitation, etc. The fact is immediately appreciated if one casts a glance at Western societies where promiscuity is highly prevalent and is most commonplace for men to have relationships with almost any woman within their circle of friends and associates, within their professional circles, etc., and the extremely high rate of divorce the requirement of children being brought up by single parents, the inability to take care of children, youngsters growing up without any sense of being rooted in any cultural tradition or in a family’s “socialising” setting causing problems of maladjustment and becoming misfits in society, not having a sense of belonging, prone to crime, not having a proper value system inculcated during formative years.

The reason why a girl is generally married with the consent of her elders is that in many societies she is not as worldly-wise as a man exposed to the outside world would be to be able to judge a person, and elder male family members would be better equipped to evaluate the suitability of a man to become her partner in life. Though people claim this is violation of the girl’s human rights, courts have seen any number of “non-Muslim” cases where parents sought custody of “an adult” girl who they believe married beneath their station, against their wishes, or a person of another caste, etc., and there is in society a tendency to ensure the person marrying takes a decision tempered with the wisdom of elders who have experienced issues of adjustment based on cultural, religious, linguistic diversity, differences in upbringing, etc., which cause greater strain on the marital relationship than in marriages between people where so many different areas requiring adjustments were not present.

The Quran says for divorced women there must be fair provision on a reasonable scale. Now what is fair provision and what is a reasonable scale would depend on individual circumstances. The question asked is “How can a na-Mahram woman accept money from a na-Mahram man and considering that they are no longer married to each other? The answer is that it is during that Iddat period that this provision has to be made (as in decided, not as in handed over) and it must be reasonable.

What is actually happening by a Civil Court’s direction for maintenance to be paid to a Muslim woman even after the Iddat period is over, is that the requirement of paying today itself a fair sum computed reasonably, is broken up into a number of fragmented payments necessarily spread over time.

A full bench judgement of three judges of the Punjab and Haryana High Court reported as 1998 (1) ALD (Crl) 546 (FB) holds the right of a divorced Muslim wife is not restricted to Iddat period. 2001 (6) ALD 63 (SC) had five Supreme Court judges hold the Muslim Women (Protection of Rights on Divorce) Act, 1986 constitutionally valid held the husband is liable to make reasonable provision for the future of the divorced wife. It is not confined to the Iddat period and extends beyond the said period and it should be made by the husband within the Iddat period.

In 2003 (3) ALD 220, the AP High Court held maintenance beyond Iddat period would not be possible for divorced Muslim wife as of right unless it is settled with the husband within the Iddat period. This beat understanding because by the simple expedient of not coming to a settlement as regards the figure, etc., within the Iddat period, the husband of a divorced lady can evade his liability and legal obligation to maintain her.

AIR 2002 SC 3551 held that in Muslim Law, as ordained by the Holy Quran, the postulate is that the talaaq must be for a reasonable cause, cannot be without reason, must be preceded by an attempt of reconciliation between the husband and the wife by two arbiters, one from the man’s side and one from the lady’s side, and only if the attempts at this reconciliation fail, would a talaaq be valid.

2004 (2) ALD (Crl) 162 saw the Court say that unless there is a valid divorce as per the Supreme Court’s judgement (cited earlier) where has been an effort at conciliation with one person from each side and only when that failed was a valid divorce pronounced, the wife would continue to be entitled to maintenance.

Articles have been written by those, hostile to Islam showing that in many countries where Shariah is applied in varying forms girls even below 15 years are often married, more in order to settle disputes than as regular, honestly arranged marriages. These instances have nothing to do with Islamic belief or the Shariah but are rooted in a feudalistic mindset attributable more to customs and cultural realities of people who practice such things and not at all to those who practice Islam per se and its teachings.

The problem of perception arises from the fact that under the Islamic system of jurisprudence puberty is not linked to an arbitrary age but to the changes that come about in the human body consequent up on the onset of puberty. Can law seriously mean, and does the logical human mind honestly contend, that one day short of 18 years a minor unable to contract and unable to marry, yet 24 hours later has magically attained the capacity to contract including contract a marriage? What is the mysterious sanctity or rationale of this figure?

Recognizing that different people mature at different times and different people have the sexual urge arise within them at different ages, what does a person who has not attained aged of 18 years but who finds himself or herself so strongly motivated by the desire to have natural legitimate expression or outlet for his or her aroused physiological urge do until he or she attains that magical ceiling age of 18?  To indulge in premarital relationships which carry within them the threat (and seeds) of unfaithfulness, deceit, disloyalty, voyeurism, etc., is loaded with potential to destroy a subsequent  marriage, potential to make society promiscuous, and to bring about an attitude of unfaithfulness developing towards one’s closest partner, because they already have such an intimate relationship with others outside the marital tie. How loyal to his nation would a person be who is disloyal even to his wife and uncaring about the impact of such conduct on his children?

It is because Islam lays emphasis on issues of faithfulness and loyalty to spouses, and adherence to the injunctions of religious character in the matter, that it has flexibility built into age-related jurisprudence which enables a person who is ready for marriage on account of changes within his or her body to legally contract a marriage and within the four corners of the law, find legitimate Halala expression for his or her natural physiological yearnings without violating the law, without threatening the societal set-up in which he or she lives, avoiding feeling guilt or criminality, and in such manner as to retain for the individual self-respect that comes from knowing that he or she has conducted himself or herself in a noble upright manner, consistent with the law, and more becoming of what a Muslim is expected to be.

Viewed in this context we see that Islamic Law in so far as marriage is concerned is something that factors into itself the needs of protecting society and preserving standards of conduct, the diverse needs of individuals which would vary between persons, cultures, societies and climatic conditions. People in hot countries (Arab nations, African desert areas) mature earlier than others. There would be perfectly logical reasons why girls there would marry earlier than in colder regions.

There is a lot of inappropriate discussion to persons of that time alleging that they married minors. The problem is that people who make these adverse comments do not approach the matter with a spirit of honest inquiry, but are usually searching for reasons to denigrate Islam and project it as something which is inconsistent with “modern” view of human rights and therefore “old fashioned” or “obsolete”: it is alleged that the Islamic Law of marriage is inconsistent with human rights of girls and permits people to marry minors.

Refusal of people to see that Islamic Law is in consonance with nature, or dislike for what they arbitrarily conclude is oppression clothed as Islamic injunction, does not either denude it of its validity or derogate from its logic, however much discomfiture it may cause them to know that it is Islamic Law alone which is in consonance with nature and all other systems of law impose on the human condition a set of rules and regulations which are inconsistent with nature.

People exposed to Western promiscuity and flexibility in relationships, live-in-relationships outside marriage, “single parents” not knowing who the child’s father is, believing the state of affairs “acceptable”, are unable to understand and appreciate Islamic views with regard to marriage.

Shafeeq R. Mahajir is a well-known lawyer based in Hyderabad

Original Headline: The logic of Islam in relation to marriage