In July 2012, Maulvi Mustafa Raza of Delhi allegedly abetted the abduction of a minor girl by marrying her off to a man who was already married. The Nikah was performed without the girl’s consent and in the absence of her parents.

Recently, additional session’s judge at Delhi’s Tees Hazari Court Kamini Lau issued a landmark judgment where she dismissed Raza’s argument that according to Sharia law, a Muslim man is allowed to have four wives at a time. “I may observe that even in countries governed by Sharia (Islamic) law; the second marriage is permitted under special circumstances such as an illness of the first wife or her inability to bear children. In these cases, with the first wife’s consent, a man may marry again and this is referred to as polygamy, a subset of polygamous marriages. The Holy Quran permits a Muslim man to marry more than one woman at a time (up to a maximum of four), but does not encourage such behaviour,” Lau stated while giving her verdict. 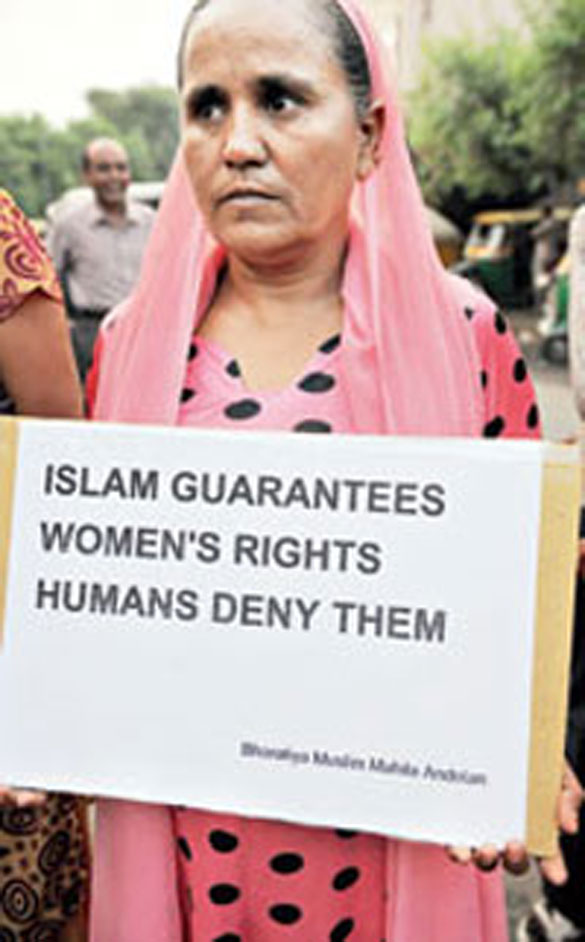 While Lau’s observation that Islam does not encourage polygamy has been lauded by many, some seem not too happy with her interpretation of the Sharia law. Indeed, the latest judgment has once again focused attention on the debate on whether or not civil courts should interpret the Sharia.

“I don’t mind the courts interpreting Islamic law to give justice to a wronged woman. This girl had been denied her right to choice, which is guaranteed by Islam,” says Shaista Amber, president of the All India Muslim Women’s Personal Law Board. Nishat Hussain, an activist working for the rights of Muslim women in Rajasthan, agrees. “As an activist I welcome this judgment,” she says.

The clamour for interpreting Muslim Personal Law in a just way is based not merely on this particular case. In yet another recent instance, a Qazi in Hyderabad married off women, including minor girls, to Arabs in exchange for a hefty meher, which the bride never got to see. Then there was the case of Imrana some years ago, where the local Muslim leaders interpreted the Sharia and asked her to marry her father-in-law who had raped her.

But in spite of these shocking cases, others have had serious issues with civil courts interpreting the Sharia. For example, Mohammed Saleem Engineer, national secretary of the Jamaat-e-Islami-e-Hind, a Delhi-based Islamic organisation, terms Lau’s observation unconstitutional. “I am against civil courts interpreting the Sharia. For that we have the Darul Uloom and All India Muslim Personal Law Board (AIMPLB),” he says.

But is it really the prerogative of Islamic scholars to interpret the Sharia? “It is wrong to say that only Quazis and the AIMPLB can interpret these laws. Indian courts deal with and, therefore, necessarily interpret Islamic law every day,” says Saif Mahmood, advocate, Supreme Court of India and managing partner of Amicus Juries Lawyers, New Delhi. “Our courts are fully competent to entertain family disputes of Muslims. So it follows that they have the freedom to interpret Muslim law as well,” he adds.

Others praise Lau’s bold judgment. “Not many want to get into controversies by giving a verdict in favour of a woman in a case where personal laws have to be interpreted,” says Calcutta High Court advocate Chandreyi Alam.

Alam says that the interpretation of Muslim Personal Law by bodies like the AIMPLB is often quite sexist. “They are run by men and hence they will interpret laws according to their convenience.”

Agrees Hussain, “Darul Uloom and AIMPLB never give decisions that are pro-women. So where do Muslim women go for justice,” she asks. Citing the case of Imrana, she says, “When she was asked to leave her husband and marry her rapist father-in-law, what were the Quazis and Maulvis thinking? It is such decisions that we fear and hence I see no wrong in the Supreme Court or High Courts interpreting Islamic laws.”

Alam says that the need of the hour is the codification of Muslim Personal Law — something that several Islamic countries have done. “But the problem is, who will bell the cat in this minority-related issue,” she asks.

Indeed, polygamy is illegal in several Islamic countries like Turkey and Tunisia. Even in Pakistan and Bangladesh, married men are required to get written permission from the first wife and then appear before a council. In 1961 the Muslim Family Law Ordinance (MFLO) introduced new regulations relating to polygamy both in Pakistan and then East Pakistan. According to the MFLO rules and regulations, a person intending to marry for the second time needs to apply to local councils set up in accordance with the MFLO.

However, there is a growing demand to set up councils to decide on whether or not a Muslim man can marry a second or a third or a fourth time. “The councils are needed,” stresses Amber. “If the AIMPLB and Darul Uloom don’t give just verdicts to women who have been wronged, they have no other option but to appeal to civil courts,” she says.

Clearly, this is a prickly issue. And there is little chance that the debate over whether or not India’s civil courts ought to interpret Muslim personal laws will die down anytime soon.