The Niqab Debate: How Muslims Contribute & Articulate Faith in British Society [Part I]

Once again a 'piece of cloth' (Niqab) has dominated our newspaper headlines and discussions on the internet. On Monday, Liberal Democrat Home Office minister Jeremy Browne called for a “national debate” as to whether or not Muslim women should be banned from wearing the Niqab, especially in places of public social interaction. 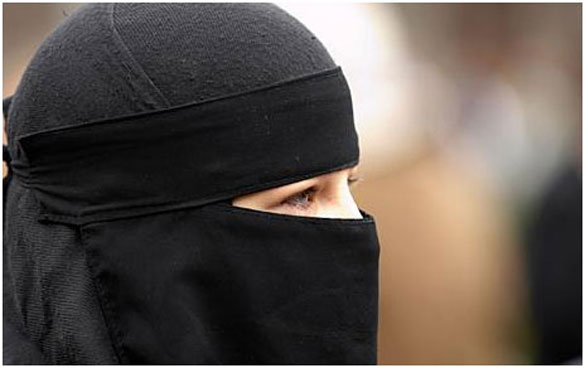 His call was echoed by Conservative MP Dr. Sarah Wollaston, who said that “we must not abandon our cultural belief that women should fully and equally participate in society.” Her colleague Bob Neil said, “I do think we need to have a serious conversation about it.”

These particular brainwaves were inspired by two other recent news headlines regarding the face veil. The first is the news of Judge Peter Murphy agreeing to come to a compromise over a defendant wearing the Niqab whilst entering a plea at a trial. The judge accepted that the defendant could reveal her identity – i.e. remove the face veil -to a female officer prior to the trial to confirm her identity. Judge Murphy had initially said she would have to remove the veil but then backtracked and arrived at a balanced and responsible conclusion.

The second story is that of Birmingham's Metropolitan College initially insisting that all those on its premises uncover their faces- whether it be removing their veils, helmets or hoodies – for security reasons. After an outcry and a very quickly planned campaign and petition against the decision, the college backtracked and has said that veils will again be allowed.

Surprisingly, the view of banning the veil is held on both sides of the political spectrum. The basic logic predicated by the left, including so called defenders of women's rights and even Mr. Browne himself, is as follows: we must ban the Niqab, a barrier to communication, as it excludes Muslim women from any meaningful social interaction and prevents them from becoming active and engaged members of their society. He also believes that a significant number of Muslim women are under compulsion to wear the face veil and it is our 'liberal' and moral duty to save from this manifestation of patriarchy.

First of all, none of these hypotheses actually take the opinions of veil-wearing women into account. Lacking credible qualitative research, it is simply another example of politicians speaking for women instead of to them. Unlike Mr. Jeremy Browne and Dr. Sarah Wollaston, when a person actually speaks to veiled women, he/she will be informed that veiled women do not feel socially excluded at all, rather they feel that more attention is given to their voice rather than their image.

Politicians must realize that the overwhelming majority of veiled Muslim women are smart and independent people who are not in need of a white, middle-class knight in shining armour to slay their medieval male relatives and unveil their imprisoned faces.

It is certainly clear that they are not forced to wear the veil. A veiled woman express how she personally feels that the choice to veil her face was her own, her religious duty towards her Creator, in which she felt great spiritual fulfillment, solace, independence and happiness. Fulfilling religious duties should not be conflated or confused with coercion.

Since a minority of British Muslim women wear veils, and they do so out of choice, the isolated incidents who may have 'pressured' to wear the face veil are, in fact, statistically irrelevant in the broader debate. This begs few serious questions: Is it logical to call for a nation-wide ban due to these isolated incidents? And why is such news flooding our newspapers? Even The Sun, which is an undoubted 'defender' of women's freedom and rights (!!), had front cover coverage of the issue calling for a ban. You couldn't make this stuff up.

It is extremely shocking that politicians and news outlets have exaggerated issue of the face veil to such an extent, whilst ignoring the real crises of the economy, the National Health Service, welfare reforms which are handicapping many working-class citizens, pensions etc. Undoubtedly, our country has much bigger fish to fry, so why all the fuss over nothing?

Furthermore, in trying to 'liberate' Muslim women, Mr. Browne and others fail to comprehend that by banning the veil the 'compulsion' and 'patriarchy' has not disappeared, but has merely been repackaged. Forcing women to uncover in order to promote choice and freedom is inherently antithetical and counter-productive; it's almost comical. Hence, it is not going to stop the 'subjugation' (in their assumption) of women but further restrict and marginalize them. There are many examples gleaned from the French ban on the Niqab.

The right-wing reasons against the face veil mainly consist of the paradigm that Britain’s elementary cultural heritage should be preserved and that the Niqab is not very Western, not very Christian, and are not very 'British'. Of course, preservation of an aspect of culture (which isn't inherently virtuous or advantageous) should never precede a woman's right to veil her face for the purpose of modesty and practicing her faith. Moreover, unfamiliarity does not warrant a nationwide ban; a country as pluralistic and diverse as Britain must not taint its culture with maltreatment of its minorities.

In an age and society wherein women are being constantly used as sexual objects, it is somewhat hypocritical to advocate the banning of the face veil under the pretext of liberating women by taking their choice from them. One has to just survey and read what is happening in our society; in media, entertainment; films, dramas, girl's magazines, popular pop songs; the increasing sexualisation of women through these various mediums should be a concern for all of us, people of faith and without.

There is certainly something dubious taking place in how a small issue like the face veil, where a minority amongst the minority of Muslim women desire to practice it, is making headlines. One cannot blame someone to be conspiracy junky if he/she believes that there is a concerted effort to demonize and marginalize Muslims in certain sectors of the media.

The response of the so called progressive Muslims

And of course there will be those pseudo 'clerics' and authorities on Islam and Muslims who will be championed by certain sections of the media to peddle their agenda of marginalizing Muslims as the 'other' who are not part of the British society. They are self-professed 'progressive' protectors of Islam and Muslims – or more accurately their understanding of Islam which the vast majority of the 1.5 billion Muslims do not subscribe nor agree to. Their argument is that the veil is a barrier in the West and therefore a ban should not be completely ruled out. They also maintain, and that is their main contention and argument, that the Niqab is not part of Islam – it is mere a cultural phenomenon that is blindly imitated by Muslim scholars and women alike. The claim, particularly in the way in which some of these self-imposed authorities assert that the Niqab is purely cultural is an incorrect allegation which is not based on sound scholarship.

All the classical and mainstream contemporary scholars of authority maintain that the Niqab is predicated upon principles (Usul) of the Shari'ah and, though no direct evidences is postulated (according to the majority of the Fuquaha), there are clear textual implications in both the sources of Law of the Shari'ah of the basis of Niqab. The vast majority of the scholars are of the view that the Niqab is not obligatory (Wajib) while a good minority among them opined the obligatory view, while others considered it recommended (Mustahab) or just permissible (Mubah). If one surveys the scholastic tradition on this issue he/she will observe the profound intellectual richness among the scholars and the deep discussions the scholarly community had (and continue today) on these issues.

The reason why there is a discussion concerning the obligation or not of the Niqab is how a specific verse in the Qur'an is interpreted in particular. None of the scholars, from all the various schools of jurisprudence within Islam, have articulated it in the manner in which these so called progressive experts of Islam have done. It only proves, to me at least, that they have no sound grounding in knowledge of the texts.

The main evidence employed by both parties, the proponents of the obligation view and those who assert that it is not obligatory is the following verse in Surah al Nur verse 31:

“They should draw their head coverings over their bosoms”

Those who say a woman must cover her face use this verse to argue that if Allah orders a woman to draw her head covering over her bosom, it means implicitly that she will be covering her face.

While other scholars counter that the same effect can be achieved by wrapping the head covering around the face and allowing it to drape over the bosom.

Therefore there is a clear valid and established interpretative discussion of that verse taking place by scholars. Scholars who argue the non-obligatory view acknowledge the soundness of their opponents' premises. These are valid legal interpretations of the sources of the Shari’ah. In fact, most of the Shari’ah or jurisprudence is premised from these various interpretative foundations. It is absurd and disingenuous to ignore that aspect of jurisprudence in Islam. If we were to pursue their methodology of thinking and extracting rulings there will not be any Shari’ah or Islam to practice, just mere symbols and superficial beliefs. Is this what these progressives desire?!

I personally subscribe to the view generally that the Niqab is not obligatory in Islam, though incline towards a position of some scholars who argue – from a purpose based (Maqasidi) interpretation of the texts- that the ruling (fatwa) varies from obligatory, recommended or to just permissible depending on circumstances and contexts. That in some situations it is even better not to observe the face veil. Many of my family members religiously wear the Niqab even though I do not consider it obligatory – it is their choice based on their study of how they carry out Islam.

No one should be compelled to wear it or take it off.

To conclude this segment of the post: at a time wherein the government spends around £6 billion every year due to alcohol abuse, it is surprising that the Niqab is given the attention it has received in the media. We should be focusing on issues that affect us like the NHS, welfare reform, alcohol abuse etc, not an issue which a very small number of women trying to practice what they believe to be a religious duty – we should be protecting their right and freedom to choose to wear the niqab and not take that right away from them.