For some, the attire is still shocking, and foreign. For others it’s emblematic of Britain’s tolerant, multicultural society. Either way, in cities like Leicester, Blackburn, Rochdale and London, it is now quite common to see black men shuffling along British streets, weighed down with iron shackles. 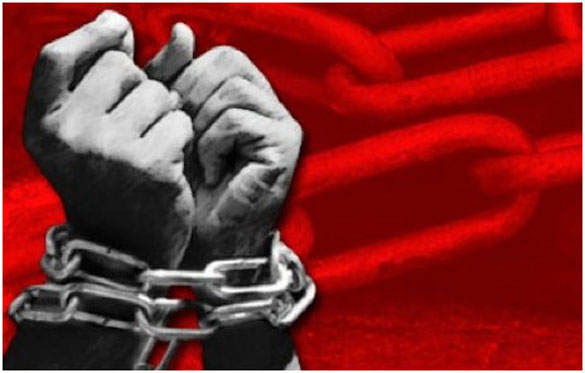 I confess that, for a while, I was one of those opposed to this contentious fashion trend. I wanted to “Ban the Shackle”. But now, in a manner very similar to that described by Victoria Coren in yesterday's Observer, I’ve had an epiphany.

It began when I bought some new shoes, which were a bit tight around the ankle. Oooh, I thought, that really nips; however I continued to wear the shoes because they looked nice. And then I realised: this is surely what it must feel like to have rusty, heavy, blood-stained iron shackles bolted around your ankles, after you’ve been torn from your family, been dragged in chains to the fevered coast, where you are loaded onto a reeking boat, and despatched to a life of misery and imprisonment.

Suddenly, I could see why you might choose to wear massive and painful iron shackles, exactly as I chose to wear my new shoes, despite the mild discomfort. It’s precisely the same way Victoria Coren saw a comparison between occasionally taking her husband’s surname, whenever she might feel like it, and wearing a religiously and socially mandated total body shroud.

But was my comparison far-fetched? To find out, I arranged an experiment. First I obtained some proper shackles, which were locked around my legs; I also added a length of chain attached to an iron ball. Thus attired, I clanked, a little shyly, down Camden High Street.

It was liberation. After years of walking wherever I liked, I was, at long last, unable to move normally. I was also marked out as someone obviously subjugated, and I felt evermore invisible as people faced away in dismay. I was so happy I started humming doleful Gospel tunes.

Nor did I leave things there. Just like Victoria Coren after her epiphany, I’ve gone on to do some research, by imagining the views of people I’ve never met. And it turns out these people I invented in my bewildered liberal brain are, like me, happy to be shackled yet also grateful that they don’t have to be shackled – in a way which even I find confusing, but which might make a column if I just go for it.

For example, one imaginary shackled person said this to me: “I’ve made my brave, confident choice to be shackled, nothing to do with the overseer wielding his horsewhip behind me”. Another added, strongly, but entirely in my mind, “iron chains are a part of our culture, they symbolise a time when we enjoyed lots of sun, picking cotton. White people just don’t understand.”

Of course, the anti-shackle brigade won’t be satisfied with my non-existent evidence. They might even claim that my argument is distastefully stupid, and point to the fact that many shackle-wearers originate in countries where black people are regarded as chattels, and where black people can’t vote, can’t drive, can’t be seen in public without their metal restraints, are legally regarded as inferior, and sometimes cannot flee their servitude without having acid thrown in their faces.

But how is this relevant? After all, everyone needs new shoes from time to time, and sometimes they can pinch a bit around the ankle.

Moreover, the shackle-haters are losing the debate. Like it or not, our streets are being excitingly enriched by new and barbaric cultural norms. And, just like Victoria Coren, I know which side I’m on. The side of liberty.

By the way, did I tell you about my shoes?