1.    Pakistan is the 6th most dangerous place in the world for women.

2.    Most of the women representatives in Pakistan politics beling to dynastic political families.

3.    Women are even prevented from voting in elections. 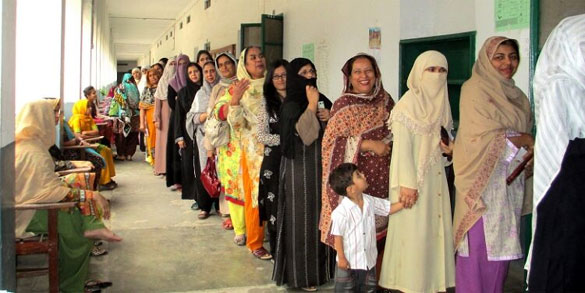 Islam honours women and bestows them a respectable place in the society. It has made education an equal right for both men and women so that education will lead them to empowerment. But in most of the Muslim societies women are an oppressed lot. They are denied educational, social, political and economic rights. In Pakistan particularly, women suffer persecution, exploitation and harassment at the hands of men who do not want them to stand shoulder to shoulder to them.

Malala Yousufzai was shot by Taliban because she claimed her right to get education. Mukhtaran Mai was victimised because of the male chauvinism prevalent in Pakistan. Veena Hayat Khan paid the price for asserting her role as a woman politician in a male dominated society.

Majority of women being deprived of quality education, they stand no chance of getting to the political and economic mainstream. The male dominated society does not even want them to vote in elections and the Election Commission of Pakistan has to rope in NGOs to ensure greater participation of women in elections. Since literacy of women is poor in Pakistan, they cannot participate in the political process and cannot intervene in the decision making process. The result is that women suffer on political and economic level. There are women of aristocratic families or political dynasties who fill the space meant for women and do not make much difference to the upliftment or empowerment of Pakistani women. Therefore, the Pakistani women have a long way to go. Saad Hafiz’ article presents a true picture of the hapless women of Pakistan.

Women And Political Power In Pakistan

Developing countries are increasingly recognising that including women as equal partners in political, economic, and public life is crucial to nation-building. Pakistan has a long way to go as women are under-represented in decision-making positions. Political power remains firmly the domain of men, except for a few elite women with dynastic political backgrounds.

Low political representation, together with entrenched religious and cultural patriarchy and rampant sexism, is the primary cause of the dismal conditions for women in the country. The personal and political emancipation of women is not a national priority. And the uneven distribution of political power, heavily skewed towards men, limits women’s contribution to nation-building. It also leaves women alone to struggle for gender-sensitive legislation and fairer laws and practices.

Yet Pakistan needs the active engagement of women as agents of change in politics and society. Women can help to improve abysmal human and economic development statistics. For example, women’s contribution in Pakistan is a mere 24% of GDP (mainly through unpaid household labour), well below competitors, leaving significant room for improvement.

Ultimately, women must have input in the male-dominated political, economic, security, and social decisions that affect the country’s future. While it is hard to contemplate based on existing conditions, women must have actual political clout, leadership roles, and meaningful decision-making power. It is an enormous task because society does not bring women up to be leaders. Women are not prepared or conditioned to challenge a hierarchical system that promotes subservience to men.

We know that the cultural norms that restrict the advancement of women in society in a male-dominated country are multi-faceted and difficult to overcome. But women can increase their political clout through the power of the vote in an electoral democracy like Pakistan.

But recent data on the participation of women in the democratic process in Pakistan is not encouraging. A frequent complaint is that women’s votes do not matter: a part of the systemic suppression of women’s political participation. Male family members also prevent a section of rural women from voting in elections.

As a result, despite increasing voter turnouts, women are underrepresented in the halls of political power and have limited access to financial resources. According to IPU data, a global organization of international parliaments, Pakistan ranks 112th for its percentage of women in national parliaments.

Political parties are reluctant to throw their weight behind female candidates who take on men in open seats as they expect them to lose. It is because women lack voter constituencies that take years to build. Hence, political parties mostly pick women indirectly on reserved seats through a gender quota in Parliament. It limits women legislators’ power and influence.

Overall, Pakistan is a tough place for women. It is made worse due to state-led anti-feminism. Women face gender discrimination, endemic sexual violence, and harassment. Successive governments have not attempted to remove the structural disparities and inequalities that hinder gender empowerment.

Male politicians often make ignorant and offensive statements about women legislators. Government leaders blame the victims for the violence perpetrated on women. Political parties pandering to the religious right find it easier to advocate the policing of women’s bodies, choices, and agency. There is no strategy or commitment to repeal the anti-women Hudood ordinances and anti-minority blasphemy laws.

It is little wonder that Pakistan is ranked third to last on the 2020 Gender Development Index (GDI). And the 6th most dangerous place for women globally, according to a 2021 report by the Women, Peace and Security Index.

Pakistan has been especially slow to include women in political decision-making. And women in leadership positions will remain a sensitive issue. But the country has made progress spurred by women’s growing presence in politics through reserved seats. In addition, the Election Commission of Pakistan has partnered with NGOs in rural areas to increase female voter registration.

The next step is to move away from symbolic representation for women to have more female politicians in influential decision-making positions. Securing women’s political, economic, and social rights can go a long way in nation-building and shared prosperity. Nothing less will do.

We know that the structures of repression that marginalize women will not disappear rapidly. Despite the challenges, women and girls must continue their fight against patriarchal forces. Women mostly have to drive the struggle for gender equality in political leadership.