On 8th of July 2018 was Abdul Sattar Edhi's second anniversary of death.

In the Hoo Haa of the elections at the end of this month and the attributive justice that is meted out by the country's NAB institution to those elites whose duty it was but failed to provide the basic essential services to the nations rich and poor that a private foundation like Edhi's is providing, it would be sinful for Pakistanis to neglect to offer renewed condolences to Begum Bilquis Bano and her family.

But undoubtedly Abdus Sattar Edhi must be singing in heaven with a hallow on his head and a harp in his hand the song “The Woman behind the Man”:-

I know I never told you

How much I depend on you

But at my weakest moment

You were strong and pulled me through 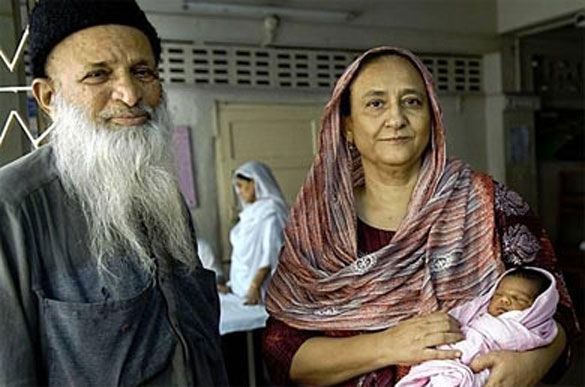 -Bilquis Bano is not the first woman to have stood with her man. History is replete with selfless women who stood shoulder to shoulder with their men and sometime in the shadows picking the slack, leading up to the great successes they achieved. But the female-half seldom got the credit they deserved in the man's world. While her husband was alive similarly not much attention was given to Bilquis Beino, as one can see.

Now that she is managing the same foundation without him with the assistance of her children as one understands; the Pakistani nation should do the right thing by her while she is amongst them and on his every anniversary and not wait to give her military honour with band and bugle when she is gone to meet her Maker.

The foundation is reputed to have saved, cared and nurtured over twenty thousand children, mainly girls, dropped anonymously in the “Paalna” that poor – very poor heartbroken mothers must have left there. Bilquis Bano, a nurse and a mother must have felt the pain and anguish the same if not more than her male counterpart could.

No amount of debt can the Pakistani common people as a whole repay the Edhis on such occasion. While they express mixed emotions, sympathies and disgust even – for their political heroes or villains during election times.

They, the political heroes and villains, must remember that they shamefully neglected their obligations and duties to their nation while enjoying unprecedented trappings of wealth and privileges to the extent that they and as is alleged, their families performed the holy pilgrimage perhaps to atone for their sins at the taxpayers expenses, that the country's justice system and the long arm of the law finally now exposed.

In this regard then it must be said that the nation of Pakistan must honour Bilquis Bano, not only by pinning medals on her but appoint her as the next President of the country. This is said in the light of the evidence that if she can manage a foundation like the Edhi's, then surely she can do a better job at being a figure head President of her country and simultaneously manage herself imposed obligation of running the foundation with the help of her family.

Such social services as provided by the Edhi foundation under the management of a family must be a source of comfort to the followers of ad-Deen that it can be done at the State level even more easily. But no; it is easier to perform hajj, topless and be filmed doing so for the gullible people to see. It helps to win votes and amass more wealth that eventually brands the forehead with ignominy.

In the Islamic Republic, a misnomer at that, compounded by the title Pakistan where a woman like Bilquis Bano is showing the male dominated pure-Muslims elite what an State is supposed to do for it citizens without the flag waving of Islam. It is a bright light at the end of dark tunnel for others to emulate.

May Abdus Sattar Edhi enjoy what he is doing where ever he is, surrounded by all those pure Hoors no doubt and angels and may Bilquis Bano, his angel on earth, and her family be blessed with health and strength to keep on doing what surely must be so pleasing to God Almighty.

Bilquis Bano, heartfelt condolences and salutations to you and your family on this occasion of the second anniversary of death of Abdus Sattar Edhi - your partner on earth.