Sabah Choudhry and Aisha Khan profess themselves “baffled”. These two friends, both young British Muslim women, both studying for degrees at prestigious London universities, have been following closely the case of Yusra Hussien, the 15-year-old schoolgirl from Bristol who is feared to have run away to Syria to become a “jihadi bride”. “Her story,” says Aisha with a shake of her “makes absolutely no sense to me”. 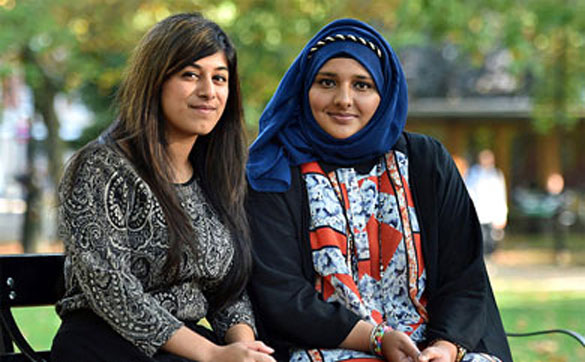 “Everyone seems to be jumping on this 'jihadi bride’ connection,” adds 20-year-old Sabah, whose family in Hounslow in Middlesex is originally from Pakistan. “But from what I am reading, what seems to have happened to Yusra has nothing at all to do with the sort of lives most young British Muslim women like me lead.”

“I just can’t understand why she’d want to go to Syria,” explains Aisha, also 20, and from Slough. The youngest daughter of parents originally from Kashmir, she’s reading Applied Social Sciences at Goldsmith’s. “The UK has given us so much in terms of education, human rights, equality. Why go from that to Syria where, as a woman, she will face so many restrictions? She won’t even be able to go out on her own to the corner shop.”

Is 'Jihad Matchmaker' The Issue?

These two young women are supporters of the “Making a Stand” initiative run by Inspire, an NGO which is rallying British Muslim women to “reject the Islamic State, oppose extremism and terrorism [and] to take the lead stopping preachers of hate preying on our children”.

Sabah and Aisha’s own particular way of doing that is to speak up publicly in an attempt to dispel many of the myths that surround young female Muslims. As typical products of their background and faith, they believe themselves well-placed to challenge the negative stereotypes which Sabah feels have accompanied “the rise of Islamophobia” in public debate in Britain.

Fuelling such prejudice, they believe, is the distorting focus on cases such as that of Yusra Hussien, hitherto a “bubbly” straight A student, on track for a career as a dentist. Her flight to Syria has been linked to that of other apparently well-integrated, bright young Muslim women, including 20-year-old Glasgow student, Aqsa Mahmood, and 16-year-old Manchester twins Zahra and Salma Halane. All have left behind devastated families and are thought to have married Isis fighters in Syria.

It has led to suggestions of the emergence of a worrying pattern of radicalisation among young females, with a finger of blame being pointed in particular at dating websites such as “Jihad Matchmaker”. It has no direct links with Isis, but states its aim as “linking up those seeking marriage in Syria in a Halal manner”.

'Islam Is the Biggest Part of Me'

“These women represent a tiny, tiny percentage,” stresses Sabah, who is reading social anthropology at the School of Oriental and African Studies, “and we still don’t even really know what the circumstances are with Yusra. There has been talk of up to 60 British girls going to Syria, but there are 2.7 million Muslims in Britain.”

Both women describe themselves as “observant” Muslims – and when we talk to them last week, they are taking part in the traditional fast to mark the last day of the annual hajj to Mecca - but they are reluctant to label themselves “religious”. It’s too narrowing. “Islam is the biggest part of me,” says Aisha. “It’s my identity.”

She is wearing a mid-blue Hijab, a veil covering her hair and neck, held in place by a blue and gold headband, but otherwise looks and acts the same as any other student milling round the park next to the university buildings where we meet. “I started wearing it was I was 13,” she recalls. “It was around the time of the London bombings. That made me really looks into my own religion. I decided to wear the Hijab because I wanted people to see me as a positive example of what it is to be a Muslim, as a way of countering the worst stereotypes of Islam.”

She does get teased a bit, she confesses, by fellow students about still living at home with her family, but that, she says, is what she wants. “If people make assumptions about me – when they say 'you won’t do that because you’re a Muslim’ – I just laugh. It’s true that if I go to the pub with friends I don’t drink, but that’s my choice.”

It's Too Easy To Blame the Internet

Sabah nods in agreement. She chooses not to wear any head-covering at all, but her faith is just as central to her life as Aisha’s. She would, she says, always refer explicitly to being a Muslim if asked to describe herself.

Neither of these young women has ever come across the sort of online sites that are blamed for radicalising the likes of Yusra Hussien. “But why would I?” asks Sabah. “You have to go looking for these sites. They don’t find you, you find them, and I’m just not interested.”

“I think it’s too easy to blame the internet,” chips in Aisha. “We’ve been talking a lot about this in my family in the last few days. Of course, the internet can play a part, but we need to ask why young people might go looking for those sites. Parents need to keep an eye on what their children are doing on line. I wasn’t allowed Facebook until I was 16. Back then I was like, 'oh my god’, but now I’m glad.”

It’s also about having open lines of communication at home. “For young people of my age, parents need to talk to them. You have to ask what guidance are some of these girls being given by their families, or by the people they meet?”

Why Would You Want To Leave The UK?

It brings us neatly to the radical preachers and activists who – often in the picture painted by politicians when they worry aloud about radicalization – haunt the corridors of universities, preying on the insecurities of young British Muslims there. The two young women are shaking their heads again. Two years into their studies at one of Britain’s biggest universities, it’s never happened to them.

“I’d like to think,” reflects Sabah, “that university students have the sense to recognise that Isis is rooted in a hate-filled ideology that demeans women and treats us as second class citizens. Why would anyone want to swap life in the UK for that?”

Perhaps because they experience the UK as prejudiced against Muslims, even though they have been born here? “No-one has ever said anything horrible to me,” replies Aisha, “and if they stare at my scarf, as sometimes people do, I prefer to think that they’re doing it because it’s too bright. I’m not going to let myself become a victim, to assume that everything coming my way is negative. That’s when you start letting things get to you. I can honestly say that I have never experienced discrimination.”

Neither of them accepts another often heard view - that Islam per se limits women’s horizons. “Islam talks of women being equal but separate,” says Sabah, who intends to go on to read for a Masters and then a career as a teacher or academic. “It offers great female role models like Khadija [the Prophet Muhammad’s first wife]. She was the boss, she had her own business, and she was older than him. She even proposed to him.”

So what would they tell a potential 'jihadi bride’ if she asked their advice before running away to Syria? “I’d say step up in this country,” says Sabah, “make your voice heard here, don’t feel you have to go abroad and marry. If you think things are wrong in this country about the way you are treated, or perceived, work to change it. We have all been given that opportunity.”