A Non-Muslim, I’m Wearing a Hijab to Make a Statement

On the day after the Parti Québécois tabled Bill 60 on Nov. 7, I started wearing a Hijab at work, to publicly register my opposition to the proposed values charter. I am not a Muslim. But I am a public-sector worker — an associate professor of history at Concordia University — and as such, a category of worker that would be affected by the charter in my working life.

I already had been considering wearing a Hijab for some time, not just to register my opposition to the principle of a values charter but also as a gesture of support for the people that Bill 60 proposes to target. Wearing a Hijab — or any other visible religious symbol — also seemed to me to be a potentially effective strategy for defying the charter’s effective implementation, if Bill 60 is ever passed. 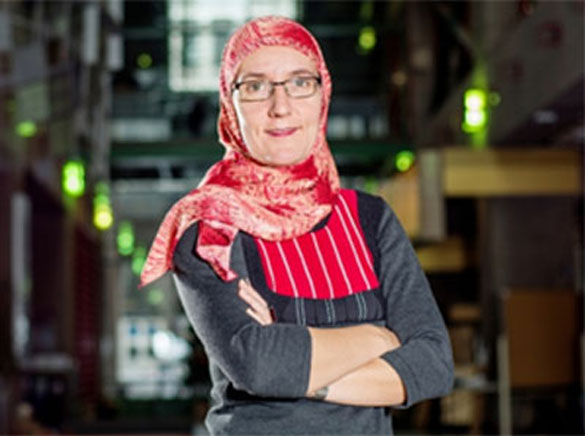 Nora Jaffary is an associate history professor at Concordia University. On, Nov. 8, she started wearing a Hijab to work, to signal her principled opposition to the values charter, and as gesture of solidarity with women in the public sector who do wear the Hijab to work, and would be affected by the charter.

I approached this gradually. Before the charter was even tabled, I had bought a scarf that could be draped in a style evoking a Hijab. I wore it to and from work, shopping, picking my kids up from school. I felt the effects immediately. Other women who were veiled were more likely to catch my eye in public; almost everyone else, more often than not, looked away. I sensed their discomfort. Or maybe I only imagined this and it was only me who felt uncomfortable.

“I’m not really Muslim,” I felt inclined to tell people. “I’m only doing this to oppose the charter.”

But that felt like cheating. On the day the charter was tabled, I decided it was time to make a stronger commitment — wearing a Hijab more consistently, and wearing a proper Hijab.

My youngest son, age 5, thought the Hijab was fine. “Everyone can wear what they want to,” he said. But my 8-year-old son was clearly uncomfortable when he saw me striding through the classroom toward him.

“Kids are going to make fun of me,” he said. He was right. “My daughter is isolated at this school,” a veiled mom told me when we were standing around in the playground watching the kindergartner’s line up to go into class. “She has one friend, whose mother is Tunisian. When she’s away from school, my daughter spends the day alone.”

On the first day I wore my Hijab to work, people had mixed reactions. Those who didn’t know me didn’t say anything, or really react at all. In fact, it felt kind of normal wearing the Hijab at Concordia. The university felt like a less tense place to be wearing a Hijab than did the métro or the streets near my home. People who knew me, by contrast, avoided saying anything about it unless I said something about it first. One colleague said: “I thought you were maybe trying to keep your ears warm in the cooler weather.”

I decided that the thing to do was just state what I was doing, every time I saw someone I knew, so they would understand what I was up to, and why.

Every colleague I spoke to was supportive. And since that first day wearing the Hijab, I have been wearing it at Concordia, in my workplace, every working day since. Some students seem surprised. I’m not sure if they think this is what a professor should be doing, or if they believe that it is an inappropriate action for a non-Muslim. I suspect they are, understandably, more wary than my colleagues of entering into a political discussion with me about a matter that is not strictly academic.

I told Ada, one of the veiled kindergarten moms, that I was wearing a Hijab to work and she said: “I am worried this will be hard for you. Is it dangerous?”

I tell her it really isn’t hard for me (although it can be momentarily awkward, and I find it hard to hear sometimes, especially on the telephone). I have supportive peers. I have the protection of a formidable union. I have cultural capital.

Right now, it seems much harder to be a person who has none of these privileges to be wearing a Hijab. It seems much braver for a woman to wear a Hijab every day, like Ada, as she says goodbye to her children when they enter a schoolyard where other children are learning to search for and seize upon difference. It seems much more problematic when a Hijab might offer a reason for one’s children’s exclusion or isolation.

All of us would do almost anything to make our kids’ lives happier, and easier, and to bring them more success. To not unveil, when one might feel that such things are at stake, is truly brave.

Nora Jaffary is an associate professor of history at Concordia University.