Ziauddin Yousafzai was told to prepare for his daughter Malala’s funeral after she was shot point-blank inside her school bus on Oct. 9 last year by a Talib, a member of the fundamentalist Taliban group bent on banning girls from going to school in Pakistan. (Ironically, talib means “seeker of knowledge” or “student” in Arabic). Images of the 14-year-old’s small body wrapped in a blood-soaked white sheet on a stretcher shocked Pakistan and the world. But after a whirlwind week of surgeries in two hospitals in Pakistan, she woke up at Birmingham’s Queen Elizabeth Hospital in Britain, alive. Malala Yousafzai, the teenage Pakistani education advocate, was snatched from death seemingly miraculously. It is a coincidence that the past several days of televised interviews and high-level encounters celebrating her survival and showcasing her spirit came on the eve of the Muslim feast of sacrifice, Eid al-Adha, observed by Muslims the world over this week. It commemorates Abraham’s willingness to serve God when asked to make an offering of his son on Mount Arafat. A lamb scampered across his path as an alternative, and his son was saved. 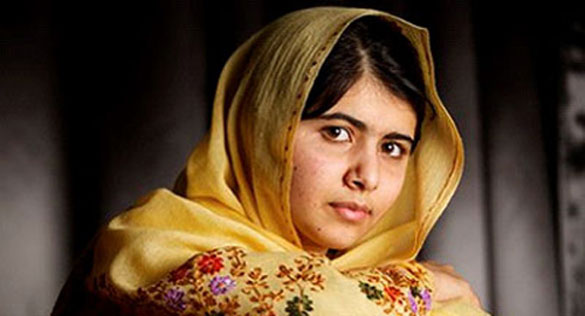 The outspoken daughter of a doting schoolmaster who stoked her love of learning and its promise, Malala, now 16, defied the Taliban’s obscurantist drive to keep girls in the dark and raised her voice in defense of their education in a country where the illiteracy rate for women is 60 percent. At age 11, she became a vocal activist, giving rousing public speeches. She also penned a blog for the BBC under a pseudonym, in which she wrote about daily harassment and restrictions imposed by the Taliban and chronicled the dire limitations of life under their reign of terror. What her Taliban detractors fail to remember is that the Prophet Mohammad prized education and surrounded himself with well-read women. His youngest wife and widow, Aisha, was so learned that he advised his disciples to learn from her.

The feisty and driven survivor wrapped up a love fest with America’s most prominent media celebrities last week, winning plaudits from the Clintons, the Obamas and others. It was a riveting victory lap one year after the attack, capped with many global accolades, although she did not end up winning the Nobel Peace Prize. Malala spoke with ease, passion and composure, exuding the emotional intelligence of a young woman tested far too early in life. An encounter with death has a way of crystallizing one’s convictions.

Her fresh message found resonance in the West, and Comedy Central’s “Daily Show” host, Jon Stewart, blurted out that he wanted to adopt her. It was a natural reaction. Who would not want a daughter who thinks she could sway the most radical Taliban extremist by talking about the need to educate his children instead of lashing out against him? In her meeting with President Obama and his family, she advised that the use of drones in her part of the world was fueling extremism.

Malala has remained true to herself. While the setting up of special funds for girls’ education by the the United Nations’ education agencies and the Washington-based Vital Voices female empowerment group are salutary, great care must be taken not to make of her something she is not. Assigning pro bono recruits from a reputable public relations firm to advise her on talking points can be useful only up to a point.

The swirl of attention and multiple agendas risk alienating Malala from her beloved home in the Swat Valley, a place of lush green fields, gurgling streams and Urdu songs.

Her survival has been a gift. Her use of the global stage to declare the imperative of education for girls will ring across the Muslim world from Casablanca to Kabul. To be most effective and to remain relevant, she has to stay close to her Pakistani experience. She has to be able to find her way back to her own cultural frames of reference and not get too detached from them. She might find a model in Shirin Ebadi, the Iranian judge and Nobel peace laureate who was able to wrestle the freedom of human rights activists in her country by using the principles of Islamic jurisprudence, outfoxing the mullahs at their own game.

Malala and her family cannot yet go home for fear of reprisals by the Taliban. For now, they have made a temporary home for themselves in Birmingham, where Malala and her two brothers can go to school. This will be a restorative retreat, preparing her for great leaps on behalf of her nation in the future. She has transcended her own borders with her battle cry for education, denied to so many in her region and her religion.

Threats by the Taliban to kill her have multiplied, and last week a spokesman warned that she will be attacked again if she keeps undermining the strict Islamic code they espouse – or rather their narrow interpretation of it. In the face of it all, she remains defiant. She has said she wants to become the prime minister of Pakistan one day. Her idol is Benazir Bhutto, the slain Pakistani prime minister.

“I am not afraid of death,” she said last July at the United Nations. Attired in several shades of pink, with a traditional Sirwal Kamis and Bhutto’s shawl, Malala reminded the world of what is usually taken for granted. What is most compelling in her message is the urgency and the fearlessness to meet the challenge, come what may.

“They thought that the bullet would silence us. But they failed. And out of that silence came thousands of voices. The terrorists thought they would change my aims and stop my ambitions, but nothing changed in my life except this: weakness, fear and hopelessness died. Strength, power and courage were born ... So here I stand. So here I stand, one girl among many.”

She told the United Nations’ Youth Assembly that she had not come to speak of revenge and urged students everywhere to value the privilege of an education before it is taken away from them. It is to be hoped that her enforced exile – and her remoteness from the sources of her anger – will not dampen her fire and dull her instincts, which are still so vivid and so inspiring to us all.

Nora Boustany is a former Washington Post correspondent and columnist who now lives in Beirut, where she writes and teaches journalism at the American University of Beirut.