Whom Do You Consider A Real Hero? Dr Aafia Siddiqui or Malala Yusufzai

He bravely stood up against a confusing blasphemy law that was often misused to target minorities, yet after his assassination, we indulged in the irrelevant details of Salmaan Taseer’s private life, while showering his killer, Mumtaz Qadri, with rose petals. Perhaps learning of Salmaan Taseer’s ‘westernised’ lifestyle helped us vilify him as a puppet of the west, and relieved us of any guilt.

Yes, we are Pakistan – a nation with confused priorities.

We are a nation where Dr Abdul Quader Khan is hailed as a hero who singlehandedly brought nuclear capability to the country, yet we barely acknowledge the murky details of his alleged sale of state secrets, and pass off the criticism levelled by his fellow theorists, such as Dr Pervez Hoodbhoy, as mere jealousy. 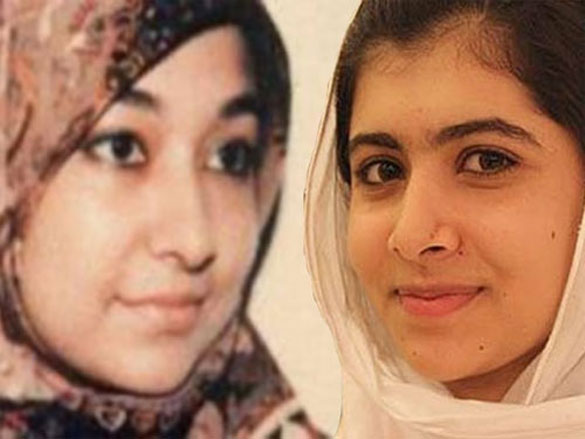 Pakistan: Where Dr Aafia Siddiqui is a hero and Malala, a villain

At the same time we completely ignore the astronomical contributions of Mohammad Abdus Salam, the first Nobel Prize winner of Pakistani origin in physics, who was forced to leave the country because he was part of the Ahmadiyya Community. Even in death, we allowed him no peace, where through court orders; the epitaph on his tomb in Pakistan was edited to remove the word ‘Muslim’ from, ‘First Muslim Nobel Laureate’. Somewhat amusingly, this changed the overall meaning of the text on his tomb to first ‘Nobel Laureate ever’, which is obviously incorrect.

Then, there is the case of Dr Aafia Siddiqui, whom we support without question. Let’s ignore the forensic evidence against her, as well the bomb manufacturing documents found in her possession, because let’s admit it, in the age of Edward Snowden, nothing can be taken at face value.

But what of the testimonial to The News from her own ex-husband? Anaesthesiologist Dr Amjad Mohammed Khan, divorced Aafia because he found her to be violent, manipulative, and on the path to terrorism,

“I was aware of Aafia’s violent personality and extremist views and suspected her involvement in Jihadi activities.”

Later, Dr Aafia is said to have married the nephew of alleged al Qaeda leader Khalid Sheikh Mohammed, Ammar al Baluchi, a man said to have conspired in the 9/11 attacks. While her family denies these allegations, the statements of her own husband, a man with whom she had three children, supports views that Dr Aafia Siddiqui was an extremist sympathiser, who lost sight of her own family,

“I feared Aafia might pursue her political ambitions to the detriment of our children’s welfare.”

Yet, whenever there is a rally organised for Dr Aafia Siddiqui’s release, we come out in droves to support her, buying into the sympathetic image our politicians feed us in order to earn votes. Admittedly, my favoured party’s leader, Pakistan Tehreek-e-Insaf (PTI) head Imran Khan, in whose favour I have written many positive columns, has marketed Dr Aafia Siddiqui’s release for PTI’s political gain.

The irony is that while the Pakistani public doesn’t question the marketing done to create favour for the incarcerated Dr Siddiqui, they level all sorts of accusations at Malala Yousafzai. On the one hand you have Dr Siddiqui, who hasn’t accomplished anything for the nation, and stands accused by her own ex-husband, and on the other hand you have a young lady, who according to her own father, is using the fame with which she is uncomfortable with, to fight for the rights of young women worldwide.

I don’t know about you, but at the age of 16, I had enough worries at school. I am quite sure I didn’t have to, oh I don’t know… take on extremists, or survive a horrific gunshot to the head!

As this comic beautifully illustrates, Malala miraculously overcame several challenges to return to her education. Yes, like any normal teenager, Malala has the right to dread going to school for reasons other than assassination.

On her 16th birthday, with her life already a household tale, Malala delivered a speech at the United Nations at New York with countless watching on their television sets across the world.

And it was marvellous.

At several points I found myself blinking away tears as Malala’s beautifully spoken words expressed defiance, compassion, sorrow, and a great level of maturity. In 20 minutes, Malala helped distance the international image of both Islam and Pakistan from the radical elements, easing the cobwebs from the minds of so many disillusioned with our part of the world.

As it turns out, Malala’s challenges in Pakistan aren’t only limited to the fundamentalists, but she also has to face the hatred of her own public. I realise hatred is a strong word, and it is one I use after careful consideration.

Minutes after her historic speech, Pakistan’s social media platforms were full of comments accusing Malala of being a foreign agent who was using an orchestrated story. Disgustingly, several posts left on The Express Tribune news links on Facebook were full of sexually explicit insults.

An immediately noticeable pattern amongst the written negativity against Malala was the atrocious wording of these diatribes, featuring the spelling and grammar skills of a child. Considering that Malala is fighting for education, it is more than a little ironic that her most vocal detractors, the Pakistani keyboard warriors, probably also need to go back to school.

Here is one of the few social media images created in favour of Malala, and something that inspired this blog:

Interestingly enough, Malala’s speech was almost completely ignored by the nation’s politicians, who were perhaps afraid of publicly praising such a contentious figure.

Disappointed by the lack of appreciation for Malala from PTI, I tweeted to Imran Khan in frustration:

Later, silencing the vocal Insafians who were criticising the young activist, Imran Khan became of the few politicians in Pakistan to acknowledge her bravery:

But as to why the Pakistani public dislikes Malala Yousafzai, the answer may lie in the fact that the young girl, who is seemingly more confident, articulate, and literate than so many of us, sparks a level of jealousy, especially with the young and insecure male population. Her support from the mistrusted western governments may create further animosity, satisfying the weak minds of those looking to rely on the crutch of a conspiracy theory, in order to comprehend an extraordinary story that their minds fail to accept.

On the other hand, the west loves her, because her story, as authentic as it is, plays to them. It alleviates their guilt for drone attacks, which they, by publicising Malala, can argue as being a necessary evil. We, on the other hand, support Dr Aafia Siddiqui, because her tale of persecution by the evil western powers plays to our sentiments.

There was a Pakistani lady similar to Malala, who was confident, intelligent, well spoken, had support from Western powers, and was also targeted by the Taliban. Yet, whenever Benazir Bhutto took to the streets, we followed in support. Perhaps our love for Malala will also flow one day.

Whom do you consider a real hero?