Hijab Controversy: Unable to prove from Quran and Hadith that Face Veil is Obligatory in Islam, Petitioners Now Rely on Tradition and Voice of Conscience

The Educational Career Of The Girls Is At Stake

1.    Quran does not mandate face cover or Burqa.

2.    Ulema insist on one-eyed Burqa without any justification.

3.    Petitioners say Hijab is only a tradition. 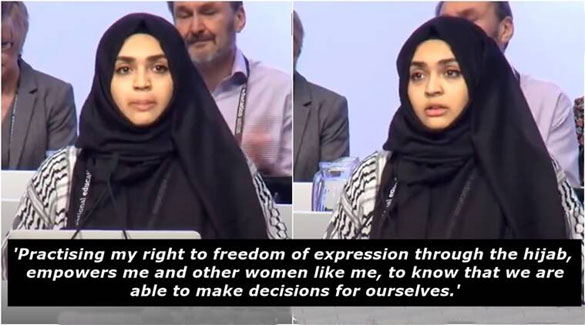 The Hijab case has been heard and debated in the Karnataka High Court for 11 days and the Court has reserved its order. The Solicitor General had told to the Court that hijab was not an ERP ( Essential Religious Practice). He had qouted the architect of Indian Constitution Dr B. R. Ambedkar that "We should leave our religious instructions out of educational institutions." He said that only ERP gets protection under Article 25 of Constitution. Interestingly the contention of the petitioners, the college students, was that wearing face cover was an Essential Religious Practice and so they should be allowed to attend class with Hijab but their advocate could not give reference from the Quran or Hadith that could prove that it was an ERP.

Also Read:  The Many Meanings of Hijab

He probably quoted Mohamnad Pickthal's translation of verse 59 of Surah Ahzab which is as follows: " O prophet, tell thy wives, and thy daughters, and the women of the believers to draw their cloaks close around them (when they go abroad). That will be better, so that they may be recognised and not annoyed. Allah is ever Forgiving and Merciful." The advocate of the petitioners also said that in the hadith it is said that even if there is no need to cover the face, the Hijab (head cover) is necessary. He said that wearing the face cover was a tradition based on the voice of conscience and so it need not be seen whether it is ERP or not. It is only a cloth that covers the head and face.

Do now the argument rests on the fact that it is tradition based on the voice of conscience whereas earlier it was said that face cover is a religious ordainment. It would be appropriate here to quote the translation of another verse from the Quran regarding Hijab: The Verse 30-31 of Surah Nur: Pickthal: "And tell the believing women to lower their gaze and be modest and to display their adornment only that which is apparent and to draw their veils over their bosom and not to reveal her adornment save to their husbands, or father's or husband's father or their sons, or their husband's sons, or their brothers or their brothers' sons, or sisters sons, or their women or their slaves or male attendants who lack vigour or children who know naught of women’s' nakedness. And let them not stomp their feet so as to reveal what they hide of their adornment. And turn into Allah together O believers in order that ye may succeed."

Also Read:  On The Hijab Controversy

Here another translation of the verse of Surah Ahzab (59) done by Mohsin Khan would be an interesting example of how the exegetes and translators of Quran have inserted their own sectarian views in the translations violating the rules of translation: O prophet tell your wives and your daughters and women of the believers to draw their cloaks (veils) all over their bodies (i.e. screen themselves completely except the eyes or one eye to see the way). That will be better that they should be known (as free respectable women) so as not to be annoyed. And Allah is Ever Oft Forgiving Most Merciful." Some Islamic scholars insist that women should wear full body Burqa with a hole before one eye. Mohsin Khan has inserted this belief in his translation though this has no basis in Quran or Hadith. The advocate of the practitioners could not prove it from Quran or Hadith. The translations of Pickthal or other honest translators does not mention face cover or full body cover as mandatory. In Urdu commentary of the verse 31 of Surah Nur, Maulana Shabbir Usmani writes: "The most prominent part of the physical body is the breast. It's veiling was especially enjoined and the way of eliminating the practices of Jahiliyyah was also preached. During Jahiliyyah, women would use khumar (Dupatta) which they put in the head and then wrapped it around the shoulders to cover the breasts. 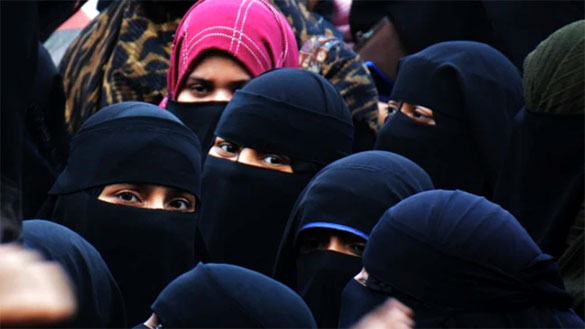 In this way the shape of the breast would remain prominent. It was as though the exhibition of beauty. The Quran taught that the Dupatta should be out on head and then it should wrapped around the breast so that ears, neck and breasts remain completely covered." Here the covering of face is not mentioned. The controversy started when the college administration banned face cover in the class. Some girls had approached the Principal to seek permission to wear Hijab to class but we're refused. According to reports, the students wing of PFI, Campus Front of India had held a press conference to protest against the ban. Some girls had approached the Principal and sought permission to wear Hijab in the class but we're refused. The girl students had attended the press conference.

If the court order goes against them the girls will either have to remove the hijab or leave the college. In the latter case, their educational career will come to an end. Their dream of achieving their goals and serve their community and country will be shattered. For this the one-eyed exegetes and Ulema as well as conservative outfits will be responsible. The girls will have to decide whether they will prefer face cover (Hijab) which has no basis in Quran and Hadith over their education. They will face a big dilemma.