Forced Conversion Is Reportedly On The Rise In Pakistan, Yet It Is Forbidden In Islam

1.    Approximately 1,000 girls between the ages of 12 and 25 are forcibly converted to Islam and married to their abductors in Pakistan.

2.    According to Islam, if a non-Muslim is compelled to say the words of the Islamic faith but does not really believe in the fundamentals of Islam, he will not become a Muslim. Then why such dark ignorance!

3.    According to Hazrat Umar Farooq, non-Muslims live in an Islamic country under the protection of Allah and the Prophet (peace be upon him).

People in Pakistan demonstrated two days ago in the Okara District of Punjab Province, demanding an end to forced conversions of teenage females and passage of the Anti-Forced Conversions Bill. The protestors are totally valid and correct in their demand. Forced conversions have become a major concern in Pakistan. Despite international and human rights organisations' efforts to eliminate forced conversions and marriages, Pakistan's government has shown only inconsistent interest in expanding religious, policy, and dialogue frameworks to protect the safety of minority girls and women

Every year, approximately 1,000 girls between the ages of 12 and 25 are forcibly converted to Islam and married to their abductors in Pakistan, according to a report by the All-Party Parliamentary Group (APPG) for Pakistani Minorities, a scenario described as a "human rights disaster." The report also highlighted the rapidly growing practice of forced conversions and weddings, pointing to the government's terrible handling of much-needed measures to address this heinous crime.

Also Read:   Can Muslims Force Non-Muslims To Convert To Islam? Why No Outrage Among Ulema On Reports Of Forced Conversions From Different Countries, Particularly Pakistan?

According to media sources, Pakistan's minority councillors expressed worry in January about the lack of security for religious minorities as the country saw a sharp spike in occurrences of forced conversion, with cases jumping from 15 in 2020 to over 60 in 2021.

More than 70% of those who were forcibly converted were minor females. The fact that there is no law in place to prevent this from happening is concerning. The Prohibition of Forced Conversion Act of 2021 was prepared and presented to the legislature, however, it was voted down because "it would pose further problems for minorities."

Both the forced conversions and the subsequent underage marriages are major human rights crimes that must be addressed through appropriate legislation that prohibits both. Furthermore, councils should be established to determine if a person is acting autonomously or under coercion while converting to a different religion. Pakistan is already a harsh environment for minorities, and issues like forced conversions exacerbate the situation.

Such reports are widely available on the internet, and their veracity is a major source of concern. In Islam, the concept of forced conversion is unacceptable. Is this happening in Pakistan as a result of ignorance? If it's ignorance, why aren't Muslim clerics and Ulema publicly condemning this inhumane and anti-Islamic practise? Is it possible for someone to become a Muslim or Muslimah after being forcibly converted to Islam? This is a fundamental concept that being a Muslim entails a heartfelt belief in one God and the recognition of Prophet Muhammad (peace be upon him) as a real Messenger of Allah.

A person does not become a Muslim only by pronouncing the words of Tawhid (Kalima) and praying the namaz (salaat) unless he or she has believes in Tawhid and Prophethood by heart.

Also Read: What Is Iman And How Can A Person Be A Momin, Believer Or Muslim? No Way to Forced Conversion

While it is apparent that the words of Tawhid and Islamic faith can be forced out of one's mouth, they cannot be forced out of one's heart. If a Muslim is forced to say words of unbelief while his heart is pleased with Islam, he does not become a disbeliever, according to the principle given in the holy Quran (16:106). Similarly, if a non-Muslim is compelled to say the words of the Islamic faith but does not really believe in the fundamentals of Islam, he will not become a Muslim.

Imran Khan, the Pakistani Prime Minister, has frequently mentioned his desire to operate on the model of the State of Medina [Riyasat-e-Medina]. This was just a so-called Riyasat-e-Medina promise because the forced conversion was not permissible in the State of Medina, nor was the notion of being labelled a Muslim if forcibly converted. If he is truly interested in the Riyasat-e-Medina, he must pass an anti-conversion bill in order to protect minority rights, as well as keep in mind the following teachings of the Prophet Muhammad Peace be upon him:

If the non-Muslims living in a Muslim country are attacked by an enemy, the Muslim government is obligated to fight on their behalf. Non-Muslims living under the Islamic government shall not be forced to convert to any other religion. It is the legal obligation of the Islamic government to protect the life, wealth, caravan, trade and land of non-Muslim citizens. Everything they already have in their possession will be kept in their possession. Their priests, Mahants, Pandits and clergy shall not be removed from their positions.

Also Read:  Forced Conversion is Unethical and Against the Will of Allah

The preceding Islamic teachings were given by the Prophet Muhammad (peace be upon him). Pakistan must act quickly to pass a bill prohibiting forced conversions for the protection of minorities. The government should also learn from Hazrat Umar (may Allah be pleased with him), the second caliph of Islam, who stated, “The non-Muslims who live in our country are under the protection of Allah (God) and the Prophet.” (Kitāb Futūḥ al-Buldān) 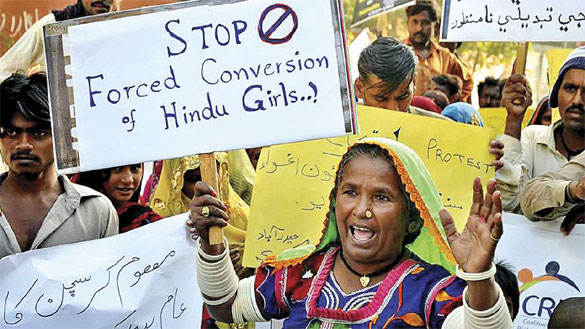 The non-Muslims live in Islamic countries under the protection of Allah and the Prophet (peace be upon him). This means that Allah and his beloved Prophet have commanded to protect the rights given to the non-Muslims, such as the right to life and the right to religious freedom etc. Therefore the state authorities must take a genuine interest in safeguarding their rights under Islam.