Instant Triple Talaq Has No Legitimacy in Islam, Point Out Scholars and Social Activists at Event Organised By New Age Islam Foundation

Report of the Program Organised by New Age Islam Foundation (NAIF) on the issue of Triple Talaq on the 15th of February 2017 at Press Club, Delhi 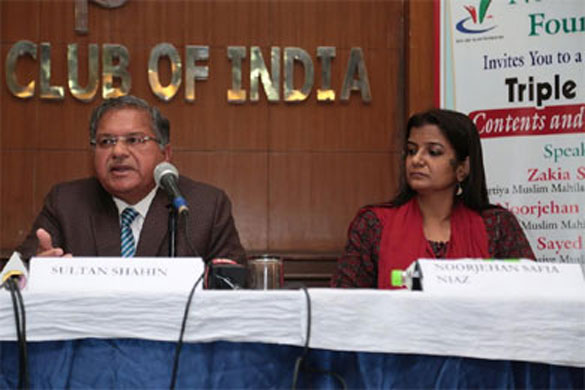 Sultan Shahin, founding editor of the progressive Muslim website, NewAgeIslam.com in his capacity as the chair of the Foundation delivering his opening remarks.

A half a day discussion on, Triple Talaq: Contents and Discontents was organised by New Age Islam Foundation at the Press Club in Delhi on the 15th of February 2017.All the logistical arrangements for the program was done by NAIF. The speakers at the discussion were Zakia Soman and Noorjehan Safia Niaz, both co-founders of the Bhartiya Muslim Mahila Andolan (BMMA) and Pune based campaigner for the abolition of triple Talaq, Sayed Bhai, representing his organization called Progressive Muslim Forum (PMF). The meeting was chaired by Sultan Shahin, founding editor of the progressive Muslim website, NewAgeIslam.com in his capacity as the chair of the Foundation. The meeting was attended by students, civil society workers and a large number of journalists for whom the event turned into a press conference.

The meeting started with the opening remarks of the Chair, Sultan Shahin, who very much outlined the contours of debate for the meeting. Arguing that there is no religious basis for the continued existence of triple Talaq amongst Muslims, Sultan Shahin stated that it was only during a specific context that the practice arose and then also, the practice was looked down upon as an exception rather than a rule. Thus the practice of triple had no basis in the Quran as it was patently discriminatory towards women, something which goes against the basic teachings of the Quran. Moreover, this issue is not just religious, but also one of human rights. India being a signatory to the UN charter of Human Rights cannot go against such a law and practice which militates against the concept of justice for women. Sultan Shahin also mentioned that Imam Abu Hanifa, whose followers form the majority of South Asian Muslims and are known as Hanafis, had termed the practice of triple Talaq as Haram and yet Muslims of this region are following it as if it is the practice ordained by Allah. 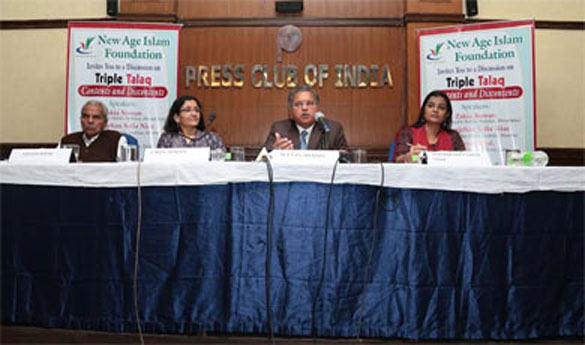 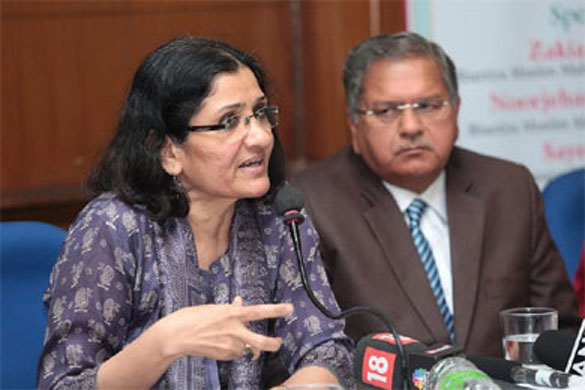 In her address, BMMA co-founder Zakia Soman underlined the need for large scale reform within the Muslim personal law. She said that this was something which should have been done by the Muslims themselves, but so far this has not happened. They (BMMA) were forced to go to Court because the Muslim leaders were unwilling to listen to them. It was only after consultations with Muslim leaders failed owing to their hard-line position on the issue that they were forced to approach the courts. Arguing that triple Talaq was unjust to women, she underlined the need to scrap it as soon as possible and for this purpose, both a legal battle as well as social reform are necessary. 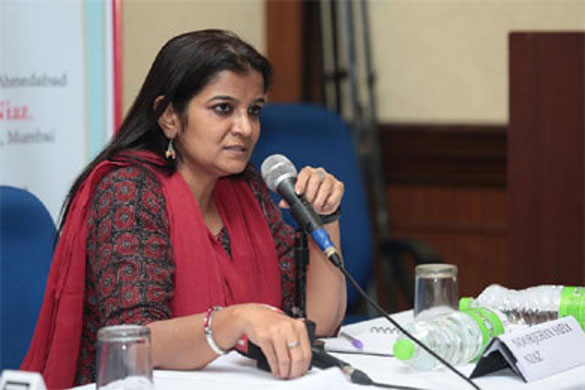 Noorjehan Safia Niaz urged the community to introspect as to why they are so rigid over protecting such a law and practice which has been repealed in so many Muslim countries. She underlined that battle of reforming personal law of Muslims will not end with triple Talaq, but that their organization (BMMA) has a larger battle in mind. They will also campaign for raising the age of marriage for Muslim girls to 18 years, abolition of polygamy and that Muslim women should also get a right to divorce. She told the audience that the BMMA has formulated a model Muslim family which should be debated by the community. Criticizing the silence of All India Muslim Personal Law Board on this issue, Noorjehan argued that the Board was complicit in the oppression of Muslim women. 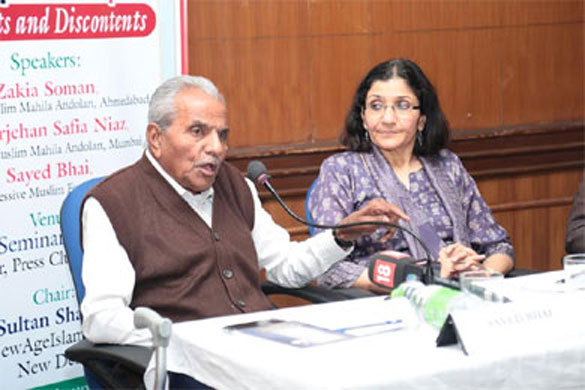 Sayed Bhai narrated a personal experience where his own sister was divorced arbitrarily through triple Talaq. He recollected what she went through after being divorced at a young age and what it did to the family at large. Arguing that triple Talaq should be abolished, he also categorically stated that it had no place in Islam and that Muslims were following because they did not know the scriptures fully. What they think is scripture is just a social convention and blind adherence to social conventions should not be encouraged in Muslim society. If justice is the cornerstone of the teachings of Islam, then such a demeaning practice like triple Talaq should be stopped at the earliest.

The discussion was followed by a question and answer session from the audience. Questions mostly related to whether the panellists had any authority to talk about Islam when they were not religious scholars themselves. There were also questions which assumed that NAIF was working on the behest of Hindu Right wing forces with an agenda of giving a bad name to Muslims. Among those who came from different NGOs, there was a sense of complain that Muslim women themselves did not come forward to register their complaints. However, the mere fact that now there was a movement amongst Muslim women campaigning for the eradication of triple Talaq seems to have dispelled some of the fears from this section.

The meeting ended on a good note with the discussants and participants sharing refreshments and carrying forward the conversation. 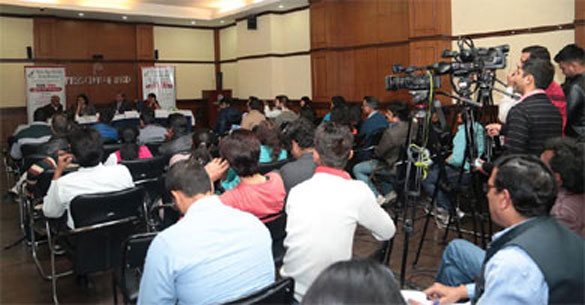 A general view of the discussion organised by New Age Islam Foundation at the Press Club in Delhi on the 15th of February 2017 on Triple Talaq: Contents and Discontents

The discussion and the press meet found wide coverage in the national print media. Leading English, Hindi and Urdu dailies gave space to the discussion the next day. However, in some newspapers, the name of the organizer, the NAIF did not find mention which is a cause of concern. Here are the snippets of some of the stories which different newspapers carried the following day.

The paper opened the report with the statement of Zakia that large scale reforms in Muslim personal law is needed. It also noted her allegation that the IMPLB was silent on issues of Muslim reform which are patently discriminatory against Muslim women. It quotes Sultan Shahin as saying that Muslims are not following the Quran in the matter of triple Talaq. It is time to change it and Muslims themselves should forward to do so. Noor Jahan is quoted as saying that Ulema oppress Muslim women. Muslim women should get the right to divorce and there should be end to polygamy.

Hamara Maqsad: Dimensions of Triple Talaq and its Discontents

The paper starts with Zakia advocating that it is time for Muslim women to become leaders and that major reform in the personal law is needed. It quotes Noorjehan as saying that it is time that the legislature and the judiciary should intervene and save Muslim women from the oppressive personal laws so that they get their legitimate rights as citizens of this country. She is also quoted as saying that AIMPLB must change its attitude towards Muslim women. Sayed Bhai is referenced in the paper citing his own personal history and how it affected his whole life. He is quoted as saying that triple Talaq and its advocacy is the work of the devil. Those advocating triple Talaq are the enemies of Islam. The paper through its reporting also editorialises a bit and sides with the stand of NAIF by stating that the defence of the Ulema of triple Talaq is weak.

The paper instead of reporting has editorialised heavily argued that the issue has been raised in the context where BJP is in power. It accuses the event as a ploy to help the BJP in the wake of UP elections. Pointing towards NAIF, it alleges that some NGOs are raking it up in the name of women’s empowerment although their agenda is to help the BJP. The paper was also critical of the fact that there were no Ulema present in the meeting. It was particularly incensed over Sultan Shahin’s statement that Abu Hanifa opinion was that triple talaq was Haram. It also accused Zakia Soman of being an agent of the Hindu Right wing forces in the country. It also argued that the organizers wanted the implementation of a uniform civil code in the country.

This paper has identical reporting to Akhbar e Mashriq

The paper is of the opinion that there was nothing new in the discussion and that this has been a very old demand of the NAIF. Also it raised the issue of Sultan Shahin citing Abu Hanifa to condemn the practice of triple Talaq without citing proper references.

The article opens with one of the these which came up in the discussion that why are Indian Muslims bent on upholding a law which was drafted by the colonial powers. It quotes Zakia as saying that Muslim personal law is against human rights and women should be liberated from it. It reminds its readers that the present NDA government is against triple talaq and wants Islamic law to be changed.

Siyasi Taqdeer: No Dress Code for Women in Quran

Apart from the misleading title, the reporter seems to have satisfied himself that the NAIF is a stooge of the BJP government. It says that Sultan cited Abu Hanifa wrongly and when challenged could not provide a reasonable rebuttal. Similarly it alleges that Noorjehan could not give any convincing answer to the question of Khula in Islam. However it did report Noorjehan’s rebuttal that they are not working at the behest of the government as their movement started way back in 2012. Zakia’s no dress code for women in Islam caught the fancy of this reported. She is reported to have not given a convincing answer when posed with a counter question.

The reportage quotes Zakia Soman as saying that Muslim marriage law should be passed as soon as possible to save Muslim girls from the evil practice of triple talaq, nikahhalala, polygamy, etc. Mentions that the event was organised by Delhi based NAIF, the reports quotes Zakia again saying that Muslim women should meet legislatures to suitably amend the personal law. It is not just an issue of religion but religion should be compatible with the constitutional rights of Muslim women.

This Hindi daily quotes Zakia Soman as saying that Muslim marriage law should be not just sensitive to the teachings based on the Quran but should also be sensitive to constitutionally guaranteed rights to Muslim women as citizens of this country.

Sourced from the news agency Bhasha, the news report is the same as in Punjab Kesari and Navbharat Times

In the English press, the story got coverage in national dailies such as Deccan Herald, Business Standard, India Today (online), The Siasat Daily. All of them had sourced the story from Press of India. Even the title of all the stories remained unchanged. The PTI ran the story titled ‘Linking Triple Talaq Ban and UCC Harmful for Muslim Women’ and quoted Zakia Soman from BMMA saying that the UCC confuses the debate about gender equality within Muslim community. According to her the Ulema use this opportunity to tell the Muslim community that we want implementation of a UCC which is not true. The name of the organiser of the event, the NAIF was sadly missing from all English dailies and website.