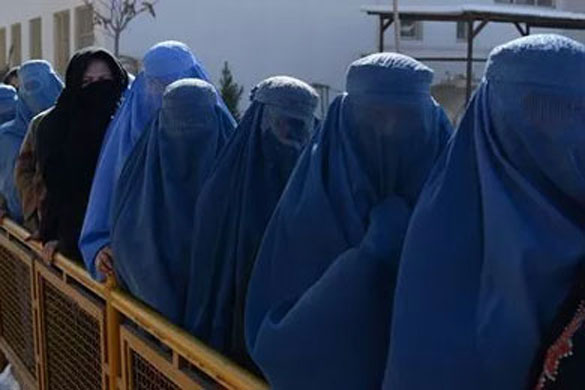 According to published reports, two jihadists were recently targeted for oblivion on the streets of the terror group’s spiritual home of Mosul in Iraq.

A killer wearing the traditional Muslim outfit, which ISIS requires women to wear, produced a handgun and dispatched the two fanatics before disappearing into the night.

“A veiled woman carrying a pistol killed two fighters of ISIS, in the early hours of the morning, near a checkpoint in the vicinity of Numaniya neighbourhood in the city of Mosul,” a source told the Daily Mirror.

“The incident is the third of its kind in the city of Mosul this month.”

ISIS -- who previously shot women for appearing in public without the Burqa -- now wants the garments banned.

The source added: “This phenomenon raised ISIS concerns during the past weeks The incident surprised the organization and forced them to issue an alert of similar attacks.”

The warning comes as many of the group’s remnants gather for a final siege in Mosul. But there are also concerns the killings are the work of the elite British Special Air Service, known to disguise themselves in Burqas.

The world's top female chess players have reacted with horror after being told they must compete at next year's world championship wearing a Hijab.

Within hours of Iran being revealed as its host country, the prestigious event was plunged into crisis as it emerged players taking part face arrest if they don't cover up.

In response, Grandmasters lined up to say they would boycott the 64-player knock-out and accused the game's scandal-hit governing body Fide of failing to stand up for women’s rights.

Hijabs have been mandatory for women in Iran since the Islamic Revolution of 1979 and the strict law is enforced by the country's "morality police".

Any woman found not wearing one in public faces arrest, a fine or public admonishment. However, players claim by awarding the event to Iran Fide is turning a blind eye to sexual discrimination.

Nazi Paikidze, the US women's champion, also raised concerns about players' safety in the Islamic republic.

She said: "It is absolutely unacceptable to host one of the most important women's tournaments in a venue where, to this day, women are forced to cover up with a hijab.

"I understand and respect cultural differences. But, failing to comply can lead to imprisonment and women's rights are being severely restricted in general.

"It does not feel safe for women from around the world to play here.” Paikidze added: "I am honoured and proud to have qualified to represent the United States in the Women’s World Championship. But, if the situation remains unchanged, I will most certainly not participate in this event."

The U.S. Department of State has issued a warning about travelling to Iran saying citizens risk being unjustly imprisoned or kidnapped because of their nationality.

Former Pan American champion Carla Heredia, from Ecuador, added: "No institution, no government, nor a Women's World Chess Championship should force women to wear or to take out a hijab.

"This violates all what sports means. Sport should be free of discrimination by sex, religion and sexual orientation.

"The obligation to use hijab is one issue, another one is that women can't share room with a male if she is not married to him.

Fide held a smaller Grand Prix event in Iran earlier this year where female players were required to wear the Hijab. The Telegraph understands several players were left angry about having to use the scarf.

Nigel Short, the British former world title contender, said: "There are people from all sorts of backgrounds going to this, there will be atheists, Christians, all sorts of people.

"If you are deeply Christian why would you want to wear a symbol of Islamic oppression of women?"

Susan Polgar, the Hungarian-born American Grandmaster and chair of Fide's Commission for Women's Chess, responded by defending the federation and saying women should respect "cultural differences".

She said: "I have travelled to nearly 60 countries. When I visited different places with different cultures, I like to show my respect by dressing up in their traditional style of clothing. No one asked me to do it. I just do it out of respect.

"I personally would have no issues with wearing a head scarf (hijab) as long as it is the same to all players. I believe the organisers provided beautiful choices for past participants of Women's Grand Prix.

"I cannot speak on behalf of others but from my personal conversations with various players in the past year, they had no real issues with it.

"If any player has a problem with it, she can and should voice her opinion to the Commission for Women's Chess or Fide and we can address it in our next meeting."

Fide is already reeling after its president, the eccentric multi-millionaire Kirsan Ilyumzhinov, was placed on a US sanctions list for alleged business dealings with Syrian president Bashar al-Assad's regime.

Ilyumzhinov has repeatedly denied the allegations and continued to act as leader despite claiming he temporarily delegated his powers to his deputy Georgios Makropoulos.

Earlier this month a planned motion to impeach Ilyumzhinov was thrown out by the Fide’s General Assembly at a meeting in Baku.

The Telegraph tried to contact Fide, but the federation has not responded.

MONTREAL - Homa Hoodfar will make her long-awaited return to Canada on Thursday after spending nearly four months in an Iranian prison.

The retired Canadian-Iranian anthropology professor was released earlier this week and flown out of Iran to Oman.

Hoodfar had been detained since June 6 at Tehran's notorious Evin prison on allegations of "dabbling in feminism" and security matters on what her family and supporters called trumped-up accusations of collaboration with a hostile government and propaganda against the state.

Hoodfar is known for her research on Muslim women in various regions of the world and a colleague suggested Monday that Iranian authorities were particularly struck by her research on homosexuality and women's sexuality in the context of Muslim countries.

Hoodfar, 65, travelled to Iran in February to see family and do archival academic research. She was arrested in March, just as she was set to return to Montreal.

She was released on bail but was rearrested in early June.

Her family had feared the worst in recent weeks, saying her health was deteriorating while in solitary confinement.

Hoodfar suffers from a neurological condition and recent reports suggested she was "barely able to walk or talk."

The state-run Oman News Agency published pictures of Hoodfar arriving in Muscat, the Omani capital, on an air force jet, walking under her own power and being greeted by her niece.

Since Canada has no diplomatic presence in Iran, the governments of Oman, Italy and Switzerland stepped in to help secure her release.

Canada has not had an embassy in Iran since 2012, when the Stephen Harper-led Conservative government cut diplomatic ties over Tehran's contested nuclear program and other issues.

Prime Minister Justin Trudeau said in a statement earlier this week the Canadian government had "actively" worked for Hoodfar's release.

Trudeau also recognized "the co-operation of those Iranian authorities" who helped her cause.

Hoodfar's supporters had pressed diplomats to discuss her case during the recent United Nations General Assembly in New York and Foreign Affairs Minister Stephane Dion met with his Iranian counterpart, Mohammad Javad Zarif, on the sidelines of the meeting last Wednesday.