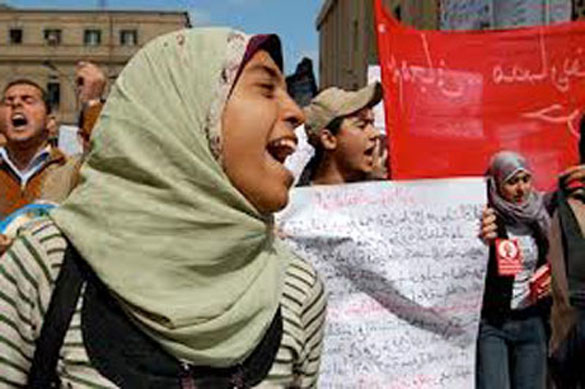 •  World Gears for First Ever ‘International Day of the Girl Child’

BAMAKO (Reuters) - More than 200 women marched against the imposition of strict Islamic law in the northern Malian town of Timbuktu on Saturday, but were dispersed by gunmen linked to al Qaeda firing shots in the air, witnesses said.

Islamists linked to al Qaeda's North African wing, AQIM, have been in control of the fabled desert town since April and have steadily imposed their interpretation of sharia law, banning music and forcing women to cover themselves with veils.

Women gathered in the main square late morning and were due to march around the town but they were stopped by gunfire.

"Life has become more and more difficult with these people," Cisse Toure, one of the protesters, told Reuters by telephone.

"We are tired. They impose veils on us and now they are hunting us like bandits for not wearing them," she added.

Estimates for the number of women who took part ranged from 100-300.

Sanda Ould Bounama, a spokesman for the Islamists confirmed a protest had taken place but was not able to give any further details.

Islamist group Ansar Dine is officially in charge of the town but the group has maintained close links with AQIM since a mix of secular and Islamist gunmen routed Malian government forces, seizing the north of the country six months ago.

The Islamists have since defeated the secular Tuareg rebels and are in full control of the desert zone.

They have been imposing strict Islamic law, including the amputation of limbs of suspected criminals, sparking localized protests by a population that has long practiced a more tolerant brand of Islam.

Lawyer Sobhi Saleh, Muslim Brotherhood figure and member of the Constituent Assembly in charge of drafting Egypt’s post-revolution constitution, said protests over the article of women rights were exaggerated and insisted the constitution gives women all their rights.

Several Egyptian women rights organizations have for the past few days been staging demonstrations in protest of article 36 of the constitution. According to the controversial article, “men and women are equal, so long as this equality does not violate Islamic laws.”

Women activists found the article manipulative and demanded the removal of the last bit. Adding Islamic laws, they argued, restricts women’s freedoms and is bound to jeopardize any rights they have acquired in the past.

Saleh viewed women’s fury at article 36 as unjustified and explained that the main aim of adding the second part was avoiding articles in international treaties that violate Islamic laws.

“Egypt had previously signed several international treaties that contain articles against Islamic laws like equality between men and women in inheritance, homosexual marriages, and prohibition of polygamy,” he told Al Arabiya.

If the last part of the sentence is not added, Saleh added, Egypt will therefore be obliged to allow practices that are against Islam and this, he said, is not acceptable.

Saleh noted that none of the 100 members of the Constituent Assembly objected to this article and that it is not negotiable.

“Whoever objects to this bit will be objecting to the Islamic faith and wreaking havoc unnecessarily. Those who protest have to know that there is no absolute equality between men and women in Islam and inheritance is an example,” he said.

Saleh said that the final draft of the constitution will be presented to committees of experts in all fields for comments and will be ready by mid November.

“The last step will be a presidential decree that the constitution be put to public referendum,” he said.

Regarding the several lawsuits that call for disbanding the Constituent Assembly, Saleh said that he and other members will go ahead with their “national duty” until a verdict is issued.

“However, I believe that demands for disbanding the assembly are not justified and that the verdict which disbanded the first one was politicized,” he said.

One day, not long ago, an anthropologist named Lila was having a conversation with her friend Zaynab, a rural Egyptian woman. Lila explained that she was planning to write a book about western concern for Muslim women deprived of their rights. Zaynab nodded approvingly, noting that she was regularly on the receiving end of injustice, but when Lila mentioned that coverage of Muslim women focused on Islam as the cause of their troubles Zaynab was shocked.

“Everyone knows that the government is the problem!” she replied.

This conversation is one of many examples of how the ways that Muslim women see their lives and their problems can be completely at odds with the way they are reported to western audiences. Professor Lila Abu-Lughod addressed a large audience at Simon Fraser University’s Harbor Centre Campus on October 4 to discuss this gap, which she has tracked over thirty years of fieldwork in Muslim communities.

A Harvard trained anthropologist currently teaching at Columbia University in New York, Abu-Lughod has focused primarily on the lives of women in rural Egypt. She notes that concerns about the social status of women, even here in North America, has been revitalised in the past twenty years — by a focus on women in Egypt and other developing countries. Vivid accounts of forced marriage, female genital mutilation, and other forms of abuse galvanise public sentiment and empower non-governmental organisations.

No such thing as a uniform Muslim woman

Typically, Ayaan Hirsi Ali, the Somali born ex-Muslim author of Infidel and Caged Virgin has popularised a set of beliefs about Muslim women. They have no rights, submitting to an indifferent god and his patriarchal followers, who read women’s inferiority in the Quran. It is the requirements of Islam that keep them subjugated. Implicitly then, if only they could be released from their religion they could be free.

North American feminists readily acknowledge that it is dangerous to generalise about women and their concerns. Our challenges and needs are always shaped by other aspects of our identities: economic status, ethnicity, disability, and sexual orientation. Yet somehow these nuances are lost when we speak of Muslim women. Suddenly, across continents, classes, and communities, they are all assumed to have the same problems, rooted in their religion.

Abu-Lughod pointed out that such accounts fail to capture the very different ways that religion intersects with individual circumstances to shape women’s lives. Many women in Afghanistan and Iran resent the imposition of burqas and hijabs in the name of religion.

Other women in Egypt and Turkey have been fighting government bans on the wearing of hijabs. But the wearing of coverings is often less weighty an issue for women in Muslim countries than it is for westerners observing them. They are often more concerned with access to jobs and education, and will dress accordingly.

Reducing religion to the root of oppression ignores the numerous other meanings it has for women. For many it nurtures personal resilience and brings comfort in times of distress. It can and has been used to combat violence and injustice in women’s lives. Muslim feminists like Afghanistan’s Fawzia Koofi, Malaysia’s Zainah Anwar, or Indonesia’s Farha Ciciek take inspiration from ethical principles in the Islamic tradition that are distinctly at odds with patriarchal interests. Islam can be wielded in favour of women’s rights.

Perhaps the trouble is that female equality and freedom are confused with western culture. Women who dress in sexually assertive ways are presumed to be more liberated, while those who appear in more conservative dress must be the captives of oppressive religious regulations.

Abu-Lughod told her audience about a New Yorker cartoon picturing three women on the subway: a woman dressed as a nun, a blonde in a bikini, and a woman wearing a niqab.

The caption was “Girls will be girls.”

Most of all, any portrayal of Muslim women as passive victims who need to be saved from their religion or culture is not only inaccurate, but a disservice to them. The tension is not between Islam and rights, but rather between different readings of that religious tradition— quarrels over what it means today.

A focus on common experiences

It is certainly true that serious violations of women’s rights occur in Muslim countries, as elsewhere. Around the world, women still experience violence and injustice directly related to their sexual identity. There is much that needs to be done.

Yet Lila Abu-Lughod warns that we should be suspicious when, in the name of liberation, we are encouraged to focus on other women who are portrayed as living utterly alien lives, in a world unconnected to our history, our actions, and our humanity. Seeing women in Muslim societies and communities as sharing familiar challenges, hopes, and tragedies, and unique individual circumstances opens the door to conversation.

The audience promptly started one, raising questions about the effect of the Arab Spring on the rights of women. Abu-Lughod’s response was that this too would affect women very differently depending on their social class, political affiliations, and urban or rural locations. There is no uniform Muslim woman.

ROCHESTER, Minn. — The Minnesota chapter of the Council on American-Islamic Relations (CAIR) is co-sponsoring a leadership summit for young Muslim women in Rochester on Saturday afternoon.

The event, organized by the Rochester Muslim Community Circle, is designed to teach leadership skills and promote community engagement among high school and college-age Muslim women in southeastern Minnesota.

Veiled and surrounded by stones, the busts of three women were attacked by Salafists last June for being religiously offensive. The Tunis-area exhibition that displayed them was hastily shuttered.

"I wanted people to interpret my art for themselves," Jelassi said at her studio, where sunlight bathed two of the figures she managed to salvage. "But the most obvious interpretation is of lapidation."

Islamist extremists have since posted photos of Jelassi and several other Tunisian artists on their websites, calling for their death. Then the courts waded into the controversy. Today, she is under investigation for "disturbing public order and morals." If found guilty, she could face prison.

The International Federation of Arabian Horse Racing (IFAHR) is set to honour Shaikha Fatima bint Mubarak, Mother of the UAE, Chairperson of the General Women’s Union, Supreme Chairperson of the Family Development Foundation and Chairwoman of the Supreme Council for Motherhood and Childhood, on the day of the Qatar Prix de L’Arc De Triumphe Festival at Longchamp Racecourse on Sunday, in recognition of her many initiatives to promote worldwide women sports in general and Arabian horse racing in particular.

The HH Shaikha Fatima bint Mubarak Ladies World Championship IFAHR has given amateur as well as professional ladies jockeys an opportunity to compete in different tracks around the globe, which provided a strong push to the development and progress of the sport. The wide media coverage has also attracted the attention of the public and contributed to the spread of the Arabian horse races.

Furne One puts on a show by emblazing his ramps with spiked dresses embellished with beads and gems, walks his models in masked faces with extraordinary mouthpieces showing a futuristic view, never failing to give awe to his audience.

“I think it’s just every designer has [his/her] own style,” says the Dubai based designer and owner of brand, Amato Couture.

Having established his name in the unfolding industry of fashion, One still continues to mesmerize fashion enthusiasts with his intricate and sophisticated designs and styles of dresses or what is well-known today as Amato Couture.

World gears for first ever ‘International Day of the Girl Child’

The first ever “International Day of the Girl Child” will take place on Oct. 11, after it was declared United Nations General Assembly following a two year campaign that was spearheaded by Plan International.

This day seeks to highlight the unique challenge faced by young girls, as they constitute an internationally marginalized group.

Plan sought the help of the Canadian government to institutionalize the day of the girl child, a term referring to girls under 18, believing it was crucial to bring international focus to the widespread denial of their basic rights.